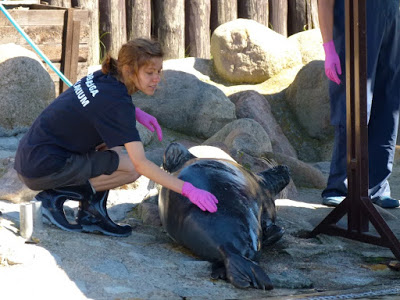 YJI Reporter Joanna Koter with one of the seals at Fokarium, a seal sanctuary in Poland. As a volunteer, she had the chance to take part in the medical training of the seals. (Photo by Ewa Malinowska / used with permission)
HEL, Poland – When I told my teacher that I was going to spend my summer volunteering in Hel, she did not treat me seriously. She was a geography teacher, after all, however very few foreigners know that Hel is a holiday resort at the very end of the Hel Peninsula in Poland.

Hel is well known for being home to one of 13 sea lanterns on the Polish coast of the Baltic Sea. There is the Museum of Coastal Defence that includes an extensive range of World War II bunkers and a seal sanctuary called Fokarium. The latter is a popular tourist attraction, but it is most importantly a research center and is managed by the Oceanography Department of the University of Gdansk. This place became my work and home for two weeks last summer.
My first impression of Hel was that the local council has a sense of humor – I saw the only bus that
runs in town, and its number was 666. With that nice start, I eagerly got to the sanctuary with my backpack and, as the volunteer coordinator had advised me before, a pair of my own wellies, or rain boots.

By noon I was ready to meet six other volunteers and the seal trainers, who were to introduce us to
our responsibilities. And by trainers I do mean trainers, not keepers, because seals can be trained in the same way as dolphins. They can jump onto buoyant platforms, fetch balls and roll around when told to.
However, seals will
not listen to everyone – they are still independent, even though they are not allowed to be released back to the sea after becoming trained seals. The reason for this is that they are fed only by humans, as fish is used as a reward during what is called a medical training. This form of training is based on encouraging the animal to take part in a medical check-up, and the most
effective incentive is feeding them fresh Baltic herring. 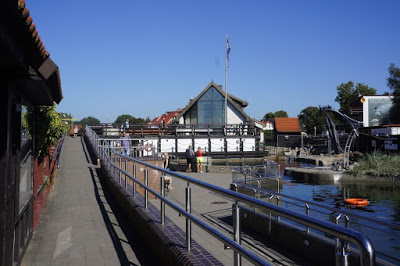 The seal sanctuary on a calm day. (Joanna Koter/YJI)

Fokarium is home to six seals: two males, Bubas and Fok, and four females: Agata, Ewa, Ania and Unda (whose name means “a wave” in Swedish). There are three trainers who take care of them, and the first time I got to watch them during training it was amusing
how much the seals resembled dogs following commands. (I have to admit, I stood out in the group as most of the volunteers were either current or aspiring animal science students and compared to them, my previous knowledge on animal training was minimal).
The relationship visible between a seal and a trainer resembled to me the one between a dog and its owner. The obedience was caused not only by perfected training but simply a friendship between a man and an animal. It is worth mentioning that a young seal is called
a szczenie, or pup – just like a young dog, and its mouth is said to be “dog-like,” although that depends on the species. Species other than the grey seal, which is kept at the sanctuary, have a more cat-like mouth.

This is one of the number of seal “fun facts” we had to learn as part of our job. On the first day, we were given a brochure with a set of FAQs on seals and the sanctuary. We had to know what species of seal we kept, how many we have released to the wild (all seals born at the sanctuary are released to the Baltic sea after they reach a specific weight) and even how many teeth seals have (18-20 on the top jaw, 16 on the bottom one). 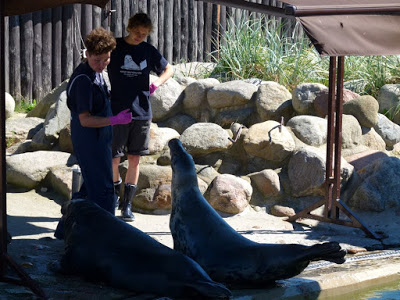 Getting up close and personal with a couple of the seals. YJI reporter Joanna Koter is on the right. (Photo by Ewa Malinowska / used with permission)

What worked best in the case of children was telling them that seals do have teeth and bite – which is true and is written on the fencing, so it was only a friendly reminder.Learning about the seals wasn’t hard when compared with our other tasks, which were mostly dealing with tourists. And tourists, as you may know if you ever had a summer job in a holiday resort, can be difficult to handle. For example, one of the work shifts was  patrolling the grounds. That person had to make sure that no one climbed onto fences or benches, leaned out of the barriers too far or did anything else to damage the sanctuary or themselves by falling into the pool.
We also helped to keep the sanctuary tidy during the day. In the evening we cleaned the building which housed a museum with an exhibition dedicated to the history of sealing and their protection. But the shift everyone enjoyed the most was helping with the training – even though it included fishing dead Baltic herrings out of the sink and cutting them in half, grinding the insides which fell out of them, and then carrying heavy steel buckets with fish between pools, trying not to fall into them.
At the end of the day, all of our work was dedicated to help fill seals’ stomachs and run a place where all the profits went to funding the 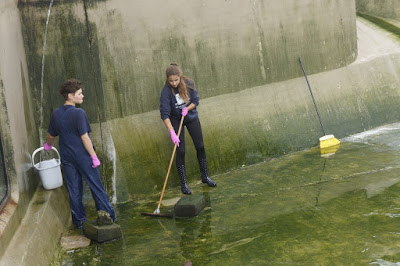 A seal trainer works with a volunteer to make healing saline water for the seals with an eye sickness. (Joanna Koter/YJI)

research on seals and other creatures from the Baltic Sea.The fact that you had to wear wellies while doing it did not make it easier. As one of the trainers told us, “If you fall in, drinks on you.” Still, there was a chance you would get a peck from one of the seals before the eyes of hundreds of tourists, so everyone did their job the best they could and there were rarely any complaints about it.

In our spare time (which was sparse but enough) we were free to explore Hel, wander to the beach or go and treat ourselves to delicious fried fish from the morning catch.
The two weeks at the sanctuary were full of hard work and – no surprise here – flew by really fast.
This volunteering experience made two of my wishes come true – to see what it’s like to work as a zookeeper, and to work in a visitor attraction dedicated to conservation of the environment.
I definitely do not regret my time at the seal sanctuary. My one piece of advice to other young reporters, or college students: next summer, go and do something completely new, explore a fresh ground, and make a good experience out of it. You will definitely
learn some new things, and if you did not expect them, your experience – and your story – will be even better.
Joanna Koter is a Reporter for Youth Journalism International.
***
You can help young journalists like Joanna tell their stories with a tax-deductible donation to this non-profit. Thank you!
HelpYJI.org