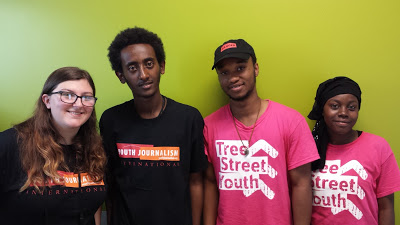 From left: Beth Criado-Band of Scotland, senior videographer for YJI; Dawit Leake of Ethiopia, reporter for YJI with two of the young people they interviewed, Djmal Maldoum and Halima Ibrahim, residents of Lewiston, Maine who are involved in Tree Street Youth. (YJI)
LEWISTON, Maine, U.S.A. – Students from different backgrounds – including asylum seekers looking for a better future – have found a sanctuary of support at a busy youth center here.

“Anyone is welcome” at Tree Street Youth, said Djmal Maldoum, a recent graduate of Lewiston High School who spends much of his time at the center.

Maldoum, 19, is originally from Ndjamena, Chad, a country in the center of Africa. When
the political situation in Chad spurred Maldoum to come to the United States with an aunt in 2014, he spoke only French and Arabic.

He settled in with another aunt in Lewiston and found that learning English was his biggest challenge.  Maldoum got the hang of the language quickly by talking to people, mostly his cousins, but also by often visiting Tree Street Youth as a new resident of Lewiston.
“Every single day, Tree Street,” said Maldoum.
He appreciates the technology here in the United States, he said, and the amount of support available for students at school and at Tree Street. He said he was surprised that teachers here don’t use corporal punishment like they do in Chad.
Something else that surprised and pleased Maldoum was discovering the all-you-can-eat buffet restaurants here in the U.S.
Although Maldoum is happy with his life in Lewiston, he still feels pressure to help his family in Chad. He said he misses his family, especially his mother, the food back home and even the sounds of kids in the street.
Maldoum wants to go to college and study international business, but can’t afford it yet. His status as an asylum seeker does not include a work permit, so he spends his days volunteering from 8 a.m. to 4 p.m. helping younger kids at Tree Street.
“The community helped me a lot when I came here,” he said.
He found Maine’s snowy, cold winters “crazy” at first, Maldoum said, and quiet little city of Lewiston didn’t initially match up with the expectations he had for life in an American city. He said he got used to all of it, though, and made a lot of friends.
“I feel like I belong to Maine now,” he said.

Maldoum isn’t the only one who appreciates the support and friendship at Tree Street.
“Tree Street is the only fun part of my day,” said Halima Ibrahim, 14, who volunteers at the center, working with three to five-year-old children.
“I’m being an inspirational person to them,” said Ibrahim, a student at Lewiston High School. “I’m showing people what’s wrong from right.”
A native of Kenya, Ibrahim came to the U.S. when she was just two years old and is now an American citizen.
She’s lived in Lewiston since 2009, runs track at school and hopes to one day be an Olympic athlete. One of 11 children, Ibrahim said she spends much of her time babysitting her seven younger brothers.
A newcomer to Tree Street is 15-year-old Abdifatah Bare, also a student at Lewiston High School.
A native of Somalia, Bare moved to the U.S. when he was only six. He said he doesn’t remember much about his hometown of
Mogadishu.
Bare said he has fun playing basketball, but also likes to hang with friends at Tree Street. He said he likes school in Lewiston
and the teachers there, too.

Looking for a home 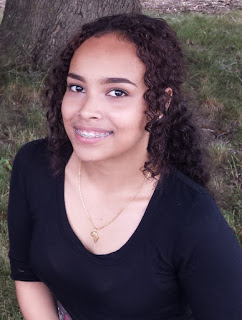 College bound Hana Mougin, who graduated from Lewiston High School this year, also gives her time to Tree Street. The center assisted her with her SAT exams and getting into university, she said.
“It’s a really good place to get help,” said Mougin, who will start taking pre-med courses at Husson University in Bangor, Maine in the fall.
Mougin is from Djibouti, a tiny nation on Africa’s eastern coast. She’s lived in Lewiston with her mother and younger brother for about four years. The three family members recently gained asylum in the U.S., she said, after spending two years in India with her step-father, a diplomat.
“It’s the best country that I’ve ever been in,” said Mougin, of India. “The people are very warm and welcoming and the food is great.”
But Mougin said that they wanted a permanent home and moved to the U.S. primarily because her parents felt that India was not safe for a teenage girl.
Being in the U.S. also offered her a chance to become tri-lingual as she didn’t speak English before arriving here.

The goal: staying safe
Both Mougin and Ibrahim said they’d been on the receiving end of hateful remarks since coming to Maine.
“I hate it when people think it’s okay to say disrespectful things,” said Ibrahim. She said she and another young Muslim girl
were in Lewiston’s Kennedy Park one day when they were called “cockroaches” and “terrorists.”
She didn’t fight back, Ibrahim said.
“If someone says something about me, I don’t fight them,” Ibrahim said. “Violence is not the answer.”
Mougin, who is also Muslim but doesn’t wear a hijab, said the local Muslim kids have questioned her faith and called her “the
Christian girl.”
“It’s my choice,” said Mougin. “I guess I got used to it. Now I don’t care what people think.”
Mougin, who is bi-racial, has a white father from France and a mother from Djibouti.
“When people see me, they don’t really know that I’m from Africa,” Mougin said.
One day she was in Wal-Mart with her mother, who was speaking French with a friend. Another customer didn’t like it and made
negative comments to Mougin, not realizing the insults were about her mother.
Mougin, who said Maine has “bipolar weather” ranging from very warm to very cold, wants to return to Djibouti and to travel
everywhere she can.
Ibrahim wants to travel too, especially to Australia and Canada.
Though she’s never met her grandparents in Kenya, she said she has no desire to go back “or anywhere that’s dangerous.”

***
Your tax-deductible contribution helps give young people a voice. Thank you for supporting them with your donation to this non-profit.
www.HelpYJI.org