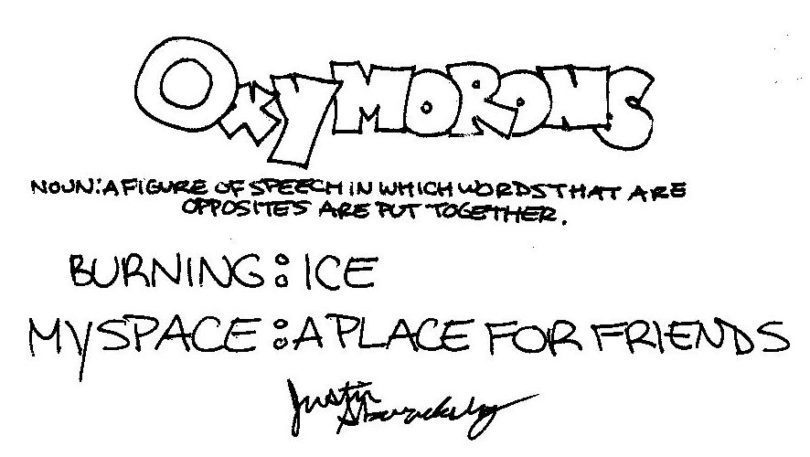 HIRAM, Maine, U.S.A. — Do you remember when your parents used to fit the cliché? When they were always all-knowing and told you things like “don’t talk to strangers,” “nobody said life was easy,” and “just do your best?” And how as we grew into teenagers, we started listening less and less to what our parents told us?

We wanted to rebel. We wanted to break away from being Mr. /Ms. Goody-two shoes. We wanted our own space. And suddenly this website comes out; www.myspace.com.

Millions of teens signed up and started chatting, but it was almost exactly like every other chat room. You never knew who was lying and who wasn’t about their age, their gender, or other things.

Teenage girls seemed to be the biggest problem with the website. They were always getting found by some creepy older man and getting raped or killed.

The media was all over it, trying to tell parents that Myspace was bad. Well there may be some truths to that. Parents don’t have all the facts all the time.

We’re teens! When did we start talking to our parents about every aspect of our lives? We want something to call our own! Myspace.

Myspace can be safe, if you let it.

You can enter in your actual age, and if you’re 15 or under, no one can view your profile unless you have added them as a friend (and they accepted you as a friend) or you can put your profile on safe mode, so that anyone wishing to become your “friend” has to know your last name or your email address to add you. Even then, you get to choose whether or not you want them to be your “friend” or not.

But the fact is that not everyone obeys the rules. Fourteen-year-old girls are dressing as sluts and saying their age is 17 or 18, with page titles like, “Look how sexy I am” or “Don’t you want me?”

They add whoever will add them and it doesn’t matter who they are – they could be serial killers or rapists or whatever.

Yeah I know, Myspace doesn’t sound to appealing to parents anymore. But after this is published, Myspace will probably have some new members – I signed up for Myspace after I read another article about how bad it is.

Somehow danger is appealing to teens. We think that we’re invincible.

If a girl was raped and killed on the street, an adult’s first thought would be, “Did she have a Myspace?”

And who said the girls on Myspace are innocent? At the age of 10, most kids go through the beginnings of sex Ed. And by the time they’re 13 or 14, they probably know more about sex than their parents did, due to movies, books, and other media.

At the age of 14, most girls are attracted to older men, because the guys their own age are too immature. At my age, 15, I tend to look for guys around the ages of 16 to 19.

Girls want to be older than they actually are. They want to be mature and appealing. Sometimes they take mature to a different level. They feel that men who are older will have an understanding of real love and a girl will kill for that. Sometimes they’ll even do something they don’t want to, just to feel loved.

Sebastianne King is a Reporter for Youth Journalism International.