DUMFRIES, Scotland — The last edition of the News of the World rolled off the presses last night, its cover featuring a montage of some of its best covers from the past 168 years.
The final headline of the famed London tabloid reads THANK YOU & GOODBYE.

The paper’s owner, News Corp. founder Rupert Murdoch, closed it down last week after allegations that it had gone beyond tapping the phones and hacking into the voicemail of politicians and celebrities. Ordinary people, too, had been victims.It all started unravelling last week when the police started to say things about New of the World’s activities after the news that murdered schoolgirl Milly Dowler’s phone had been hacked after she had gone missing in 2002 and some of its messages deleted.
As the scandal exploded, many companies started to withdraw their advertising from the paper, including Ford, Tesco and other business giants.
As speculation swirled about Murdoch and News Corp. Chief Executive Officer Rebekah Brooks, the paper’s former editor, the tabloid simply folded, with all of its employees thrown out of work.
The real question behind all of this is “who is responsible?”
Andy Coulson, the paper’s editor from 2003 to 2007 is being questioned about what he knows and Clive Goodman, its royal correspondent has already been jailed.
Brooks, the editor in 2002 and 2003, hasn’t been jailed – yet. She is still b
acked by Murdoch, the Australian newspaper baron who is scheduled to speak today with Prime Minister David Cameron.
The whole thing is really a giant mess.
Now, all the world can do is wait, as more information rolls out over the coming days, maybe weeks, maybe months.
The News of the World is gone, but the news goes on. 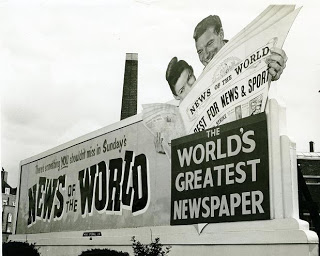