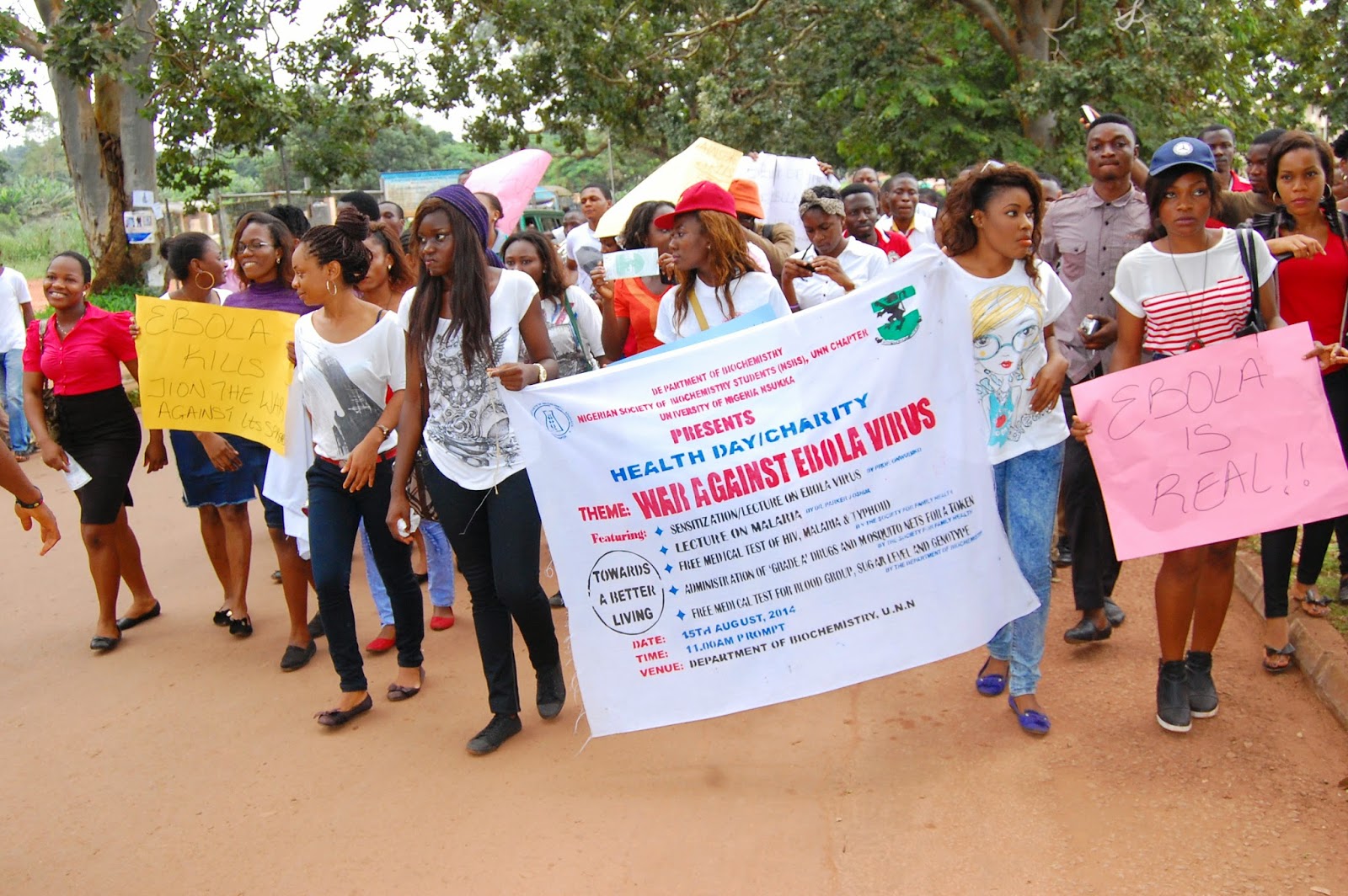 Students at the University of Nigeria in Nsukka joined in a campaign to raise awareness of the Ebola virus and how people can protect themselves from it. (Festus Iyorah/YJI)

NSUKKA, Enugu, Nigeria – Students must be conscious and hygienic in order to curb the deadly Ebola virus, biochemistry, Professor Henry Onwubiko said Friday at a health conference at the University of Nigeria in Nsukka.

Onwubiko called on students and the university to attain consciousness and help keep the environment clean in this period of possible infection.

“The global world has really entered a period of insurgence in infectivity, a stage where viruses and pathogen thrives in the society and students needs to attain consciousness and be hygienic,” Onwubiko said.

His lecture, “War against Ebola virus” was part of the health conference, which included the biochemistry department.

Before the conference, biochemistry students staged a campaign around the university hoisting placards and banner emblazoned with words sensitizing people on the deadly Ebola virus.

Ofurum who is also a third-year student of Biochemistry urged other department in the university to join the campaign against the Ebola virus disease and the university should also organize lectures, seminars and conference  to stop the deadly virus from spreading. 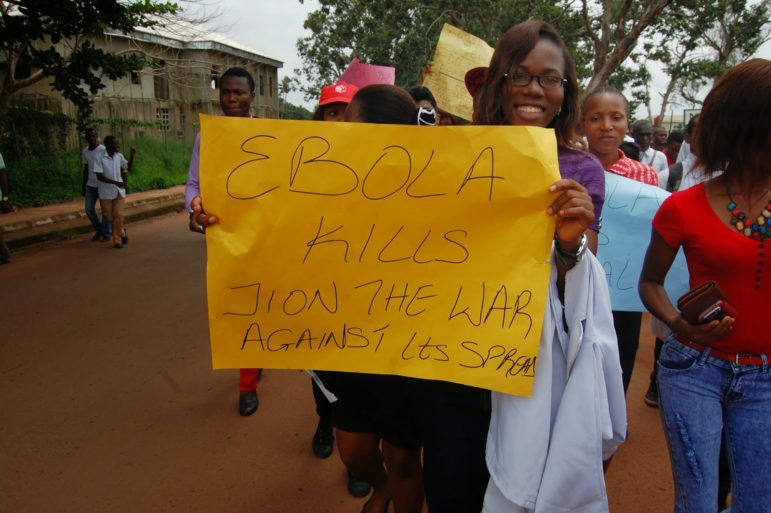 Students at the University of Nigeria in Nsukka take part in an educational campaign to raise awareness of Ebola. (Festus Iyorah/YJI)

Onwubiko, who is also a researcher looking into the disease, said the university has a big role to play to curtail this disease, including education, proper research and establishment of a disease control center.

“The university needs to be connected to the center of disease control and our laboratory needs to be equipped for proper research on the virus,” Onwubiko said. “The university should also help in orientating the students on how to increase their level of consciousness towards the virus.”

One of the conference organizers, 20-year-old Okechukwu Ochulor, said general ignorance about the Ebola virus spurred the biochemistry department to hold the event. He said there is a need to sensitize students on the proper measures to take in order to prevent the scourge of the virus from entering the university. 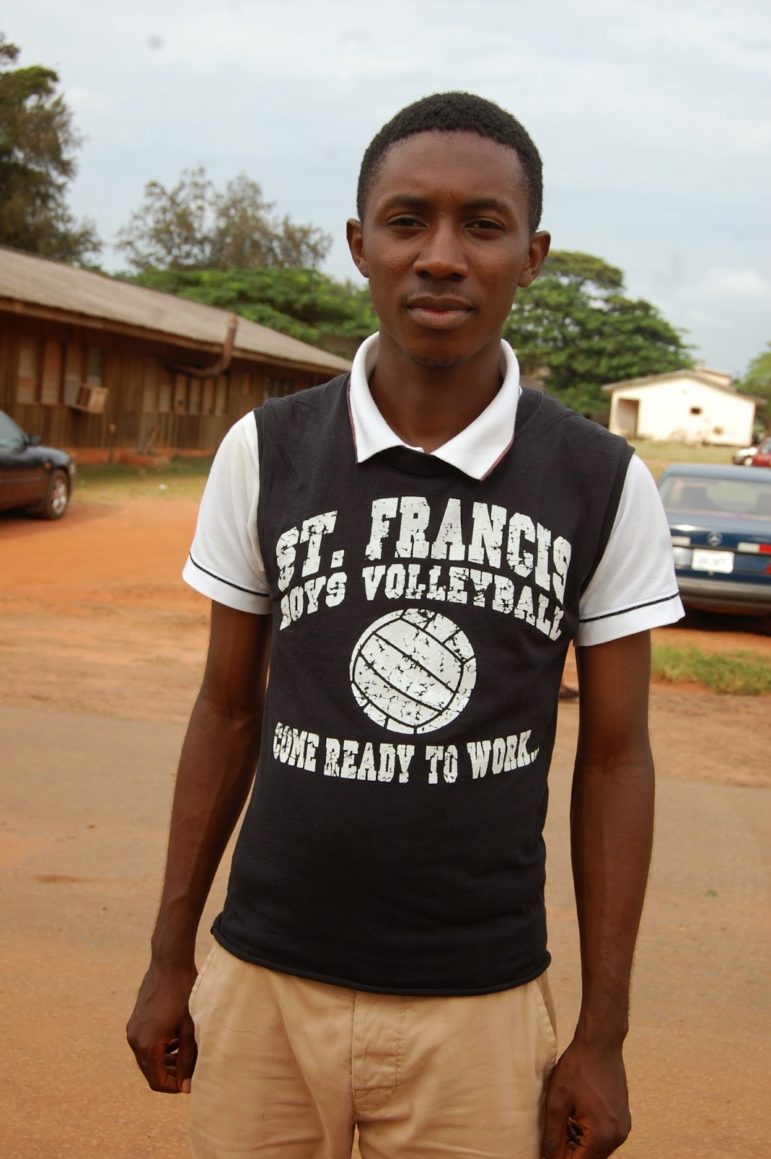 “The love we have for our fellow student is what motivated us to organize this conference,” Ochulor said.
Students who attended the conference were excited about the opportunity.
“I feel good about this conference, though I’ve been hearing rumours about Ebola virus,” said Dominic Igwebuike, 22. Afterward, he said he’d learned a lot.
“From this conference I’ve learnt that people can still survive this virus if reported on time, unlike before when I used to think that someone cannot survive the virus,” said Favour Ofurum, 20.
According to the World Health Organization, Ebola first appeared in 1976 in two simultaneous outbreaks, one in a village near the Ebola River in the Democratic Republic of Congo and the other in Sudan.

The virus, formerly known as Ebola hemorrhagic fever, has a death rate of up to 90 percent. It is transmitted from person to person through direct contact with bodily fluids, according to the WHO, and there is not yet a vaccine to prevent it. Health workers and family members of those with the virus are most likely to become infected.

The Daily Sun, a national newspaper in Nigeria, recently reported that a nurse who had contact with an American doctor who died of Ebola, had skipped quarantine and travelled to Enugu, a few miles away from the Nsukka campus, which roused fear among students.
Aside from sensitizing people on what the World Health Organization has tagged the “most deadly virus,” the conference also dealt with how to prevent the virus from spreading.

Onwubiko said the university must take responsibility by clearing the environment, especially the toilets, where bodily fluids such as urine and saliva can be found. He also charged the university to take the campaign against the virus seriously.

To students, Onwubiko said education is more than reading and writing, but also means developing consciousness, and taking responsibility for taking care of themselves and others in order to stop the deadly virus.
Organizer Ochulor, who is a third-year biochemistry student, said students should dress properly by wearing long sleeves and hand gloves in order to avoid body contact. And, he said, security officials should ensure good seating arrangements in the buses and cabs that students use for transportation.
Ochulor said the university should take this spread of Ebola seriously through lectures and seminars on the virus.

Festus Iyorah is a Reporter for Youth Journalism International. 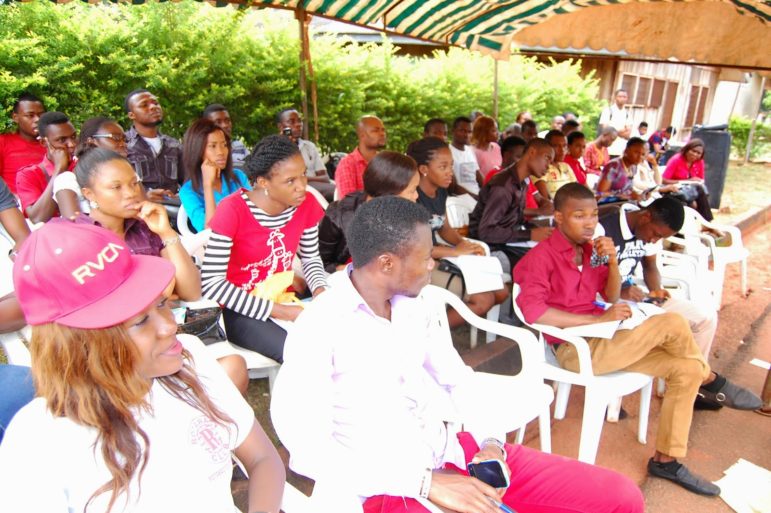 Biodiversity conference participants at the University of Nigeria in Nsukka. (Festus Iyorah/YJI)