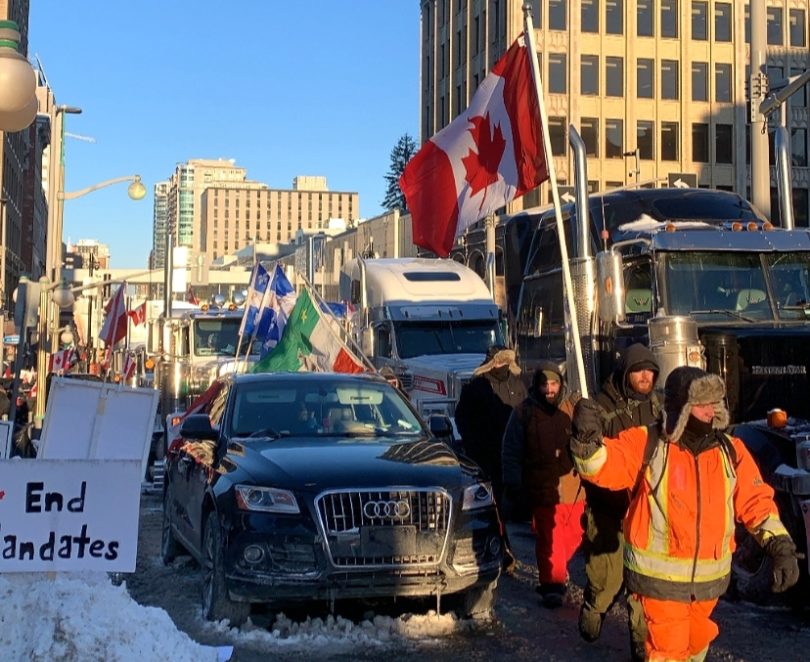 A man carrying a Canadian flag walks in the protest area. (Selvaganeshamoorthi Balakrishnan/YJI)

Ottawa, CANADA – A cacophony of deafening honks reverberated throughout much of downtown Ottawa Saturday when trucks and protesters clogged the streets adjacent to the Canadian Parliament.

Protesters, some holding placards denouncing the government’s covid-related sanitary measures and mandates, began gathering more than a week earlier in the capital city.

On Sunday, Ottawa Mayor Jim Watson declared a state of emergency in the city, which would enable the police and city staff to get resources faster to deal with the protest.

On Monday, the Ottawa City Council called on the state and national government “to provide all necessary financial and logistical supports required to bring the protest to a peaceful end and allow the City of Ottawa to return to normal.”

Though it started as a protest against vaccine requirements for truckers crossing the U.S. border to re-enter Canada, the demands of the movement have grown, and currently include the removal of vaccine mandates across the country.

In many places in Canada, a vaccine passport is needed to dine at restaurants or to enter certain recreational areas and places of worship.

Canadians also need to be vaccinated to board a flight.

“I’m vaccinated. I’m pro-vaccine. But I’m also pro-democracy, pro-rights,” said Robert Brown, a trucker from Alberta, a province in eastern Canada. “I believe that people should have a say over what they put in their body. Border mandates forces this vaccine down everyone’s throat.”

The 43-year-old Albertan, who spent eight days on the road driving across the country to reach the rally, joined the crowd – estimated by CTV News at 5,000 demonstrators – packing the streets near the Parliament Saturday afternoon.

Some ordinary citizens viewed this assembly as an outlet to voice their disagreement with the current state-of-affairs.

“We drove here all the way from Kingston. We had the weekend off and we wanted to show solidarity with our truckers,” said protester Ginette Leroy, who made the approximately two-hour drive to participate. “The government is taking away our freedom in the name of public safety. I’m not going to sit back and watch that happen. The truckers aren’t leaving till we get our freedoms back.”

The Canadian Trucking Alliance and many provincial trucking associations condemned the protest.

“The only way to cross the border, in a commercial truck or any other vehicle, is to get vaccinated,” the trucking alliance said in a statement. “As an industry we must adapt and comply with this mandate and the vast majority (of truckers) have.”

Demonstrators and organizations supporting the protests set up makeshift open-air kitchens. Drum fires sprinkled across the location kept protestors warm in the frigid cold. Music blared and some in the crowd took the opportunity to drink, dance and smoke marijuana.

The scene felt more like a carnival than a warzone.

The protest, for the most part, has been loud, but non-violent.

Ottawa police said they had 60 criminal investigations underway related to the demonstration as of Sunday. They are primarily for mischief, thefts, hate crimes and property damage, police said.

Many downtown businesses closed their doors due to the protest, and the few restaurants that remained open only offered take-out.

Local news reports said the constant honking by some demonstrators, sometimes late into night, had frayed the nerves of nearby Ottawa residents.  On Monday, an Ottawa judge ruled that the truckers must stop honking their horns for 10 days, according to CBC News.

Shortly after the ruling, Prime Minister Justin Trudeau tweeted, “Canadians have the right to protest, to disagree with their government, and to make their voices heard. We’ll always protect that right. But let’s be clear: They don’t have the right to blockade our economy, or our democracy, or our fellow citizens’ daily lives. It has to stop.”

The protest, now in its second week, shows no signs of abating.

Selvaganeshamoorthi Balakrishnan is a Correspondent and Senior Photographer with Youth Journalism International.

See video coverage from this protest.