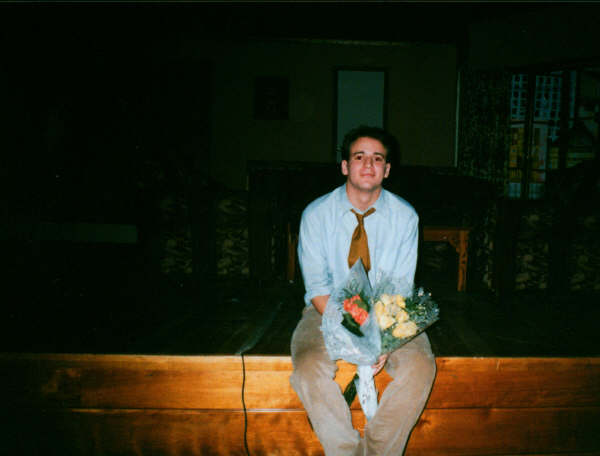 Joe Wilbur, one of the cast for "The Odd Couple" at Bristol Eastern High School. (YJI)

The fall play this year — Neil Simon’s The Odd Couple — will have a male and a female version, with two separate casts.

The BEHS Thespians decided to have two shows for two reasons. First, Simon wrote his original version of The Odd Couple in 1965 for Broadway. It starred Walter Matthau and Art Carney. But Simon rewrote the play in 1975 because he wanted Sally Struthers and Rita Moreno to take part.

Secondly, Al Jones, BEHS drama director, said it would have been unfair to either the boys or the girls if one show were done over the other because the small casts are mostly one sex or the other.

Both plots of the play and the locale are the same, but the jokes and situations are different.

The Odd Couple is about two people who are divorced from their spouses because they can’t stand each others’ personal habits. One is too neat and the other is a complete slob.

They decided to move in together for the same reasons they got divorced from their previous mates.

“We think it’s a funny play,” said senior Molly Scannell, who plays Olive, the slobbish female lead. “We put lots of hard work into it and we hope lots of people come see it.”

Jones aid each cast gets the opportunity to watch the other cast and gain insight into each others’ jokes, dialect and humor.

“It has been an educational experience for the kids,” said Jones. “It’s an exciting production because we’ve never done two shows at once.”

The female cast consists of eight students with the leads of Florence and Olive played by seniors Sara Madden and Scannell. The other characters are Renee, played by senior Colleen Younghams; Sylvie by senior April Street; Vera by senior Carolyn Choi; Mickey by senior Hila Yosafi; Jesus by junior John Dickman; and Manolo by junior Ken Asensio.

Tickets are available for $5 at the door or by calling the BEHS music department at 584-7860. One ticket gets you into both shows.