The award, under the category Best Documentary Short, was the first time in the 84-year history of the Oscars that
a Pakistani documentary was nominated and won. 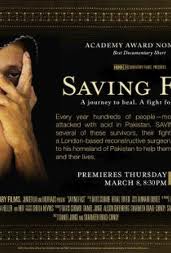 Saving Face chronicles British plastic surgeon Dr. Mohammad Jawad, who
returns to his homeland of Pakistan and performs
reconstructive surgery on survivors of acid attacks there.
The HBO documentary
is the story of one woman as she fights to see that the perpetrators are imprisoned for life for the crime. Victims are often women who refuse a marriage proposal or are unable to meet the demands of a dowry.
Chinoy’s victory shines a light on a subject that affects thousands
of women in Pakistan and elsewhere, yet is seldom discussed.
In her acceptance
speech, Chinoy dedicated the award to “all the heroes working on the ground in
Pakistan” including the surgeon, Jawad, the subjects of the documentary
and the women of Pakistan.
The women’s “bravery and resilience in the face of adversity
inspires me every single day,” she said. “They are the true heroes of
Pakistan.”
Co-director Daniel Junge said he
had the idea for Saving Face after hearing about Jawad, and asked Chinoy to work
with him. He has been previously nominated for both an Oscar and an Emmy.
Saving Face competed against God Is the Bigger Elvis, a
Rebecca Cammisa and Julie Anderson film about a mid-century starlet who chose
the church over Hollywood and The Barber of Birmingham, a Gail Dolgin
and Robin Fryday film that follows the life of 85-year-old barber James
Armstrong and the legacy of the civil rights movement, among others.
Chinoy’s films have previously
won international acclaim. Her 2010 documentary, Pakistan’s Taliban Generation, won an International Emmy Award.