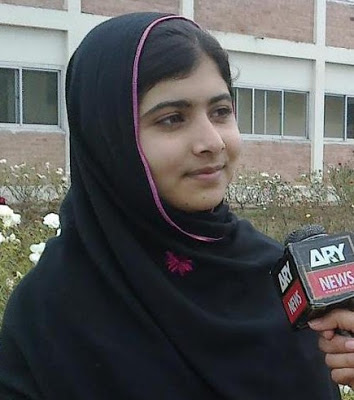 By
Talon Bronson
Senior
Reporter
Youth Journalism International
PORTLAND,
Oregon, U.S.A. –  When you live in a
world where a 14-year-old girl can get shot in cold blood – hunted down like an
animal for speaking her mind and shouting out for the disenfranchised and the
neglected – you get the feeling in your gut that something isn’t entirely right
with the picture.

Malala
Yousafzai, a young Pakistani girl, found herself in the throes of death’s cold
hands when a would-be assassin from the Taliban  tracked her down Tuesday, cornered in her
school bus, and shot her in the head.
She
had spoken with courage, raising her hands up against the oppressive, the
hateful and the bigoted, and the Taliban answered her bravery with a death
warrant, one terrible bullet and pain.

Yousafzai
came to prominence when she began blogging incognito for the BBC about the
trials of living under the oppression of the Taliban reign. She had a strong
voice and she spoke out against the Taliban and its attempts to ban the
education of women.
She
was nominated for the International Children’s Peace Prize in 2011. She won the National Peace Prize in Pakistan, where there is a school named for her.
As
I put this to paper, she is in critical condition following surgery.
Arrangements are in place to move her out of Pakistan as soon as she is stable
so she may receive better care for her injuries.
Ihsanullah Ihsan, a head spokesman for the
Taliban, and a man I can only imagine to be as ugly as his deeds, already
claimed responsibility for the attack. He called this girl a symbol of obscenity, said that she has
spread negative propaganda.
Well, that is what he says. But she did not
spread her word with bullets and death warrants and she did not speak her mind
with the language of hate. Ihsan has no claim to condemn obscenity.
What could be more obscene than putting a bullet
in the head of a young girl for fighting for her right to be a doctor one day? Violence
and hate are the final obscenities, and I can only hope that the bastards
behind the deed find just punishment.
The world that Yousafzai inhabits is a different
one than the world I was told of as a child, and the differences are large, and
ugly. The weak among us, the frail of heart, may want to turn their eyes. They
may want to ignore the outrages that stand before us, but if we have any shred
of dignity and respect for our own freedoms, we will stare these obscenities
straight in the eye, and condemn them for what they are: hate in its purest
form. Hate for love, peace, and equality.
Bad men will always stand on the shoulders of
superiority, as the Taliban stands on the shoulders of religious fanaticism and
masculine bravado, but good men and women must look this superiority in the
eye, and shoot it down, lay it on the ground with all the ideals that we have
had the strength to desert over the past 100 years, be it racism, sexism, or
the simple hatred of another for their creed.
When Yousafzai returns to her place as an
outspoken voice against the wrongdoings of her country, I hope she comes back
spitting the bullets that the bigoted planted in her head.
Her word is the word of countless others, the
word of those who will not pick up an automatic to make their point, and so –
in some places in this world – are exiled to silence. While the shots have rung
out and Yousafzai has fallen, bullet holes can heal.
Statements of truth, written in ink and paid for
in blood, will stay forever.

Help us keep this kind of writing coming! Youth Journalism International needs your financial help. You can donate by following this link.