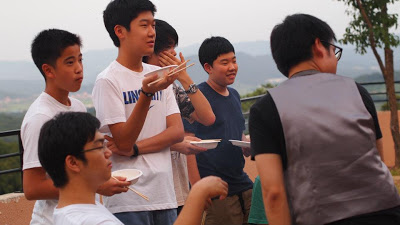 By Rachel Kim, Kate Park,
Jessica Um and Michael Yoon
Junior Reporters
Youth Journalism International
ANSEONG, South Korea – After two hours of traveling on the bus, we
finally arrived at the Korea Leadership Center in Anseong. Except for a few familiar
faces on our summer adventure, we were surrounded by people we didn’t know.
Though full of excitement, we were also concerned about the next two days we
would have to spend in the new environment, for we did not have any idea of
what to expect of Conflict Consortium 2012.

Moving into a large conference room and awkwardly forming into
groups, we immediately proceeded to ice-breaker activities. We quickly learned
each other’s names, interacted through various games, and shared good laughs as
we built new relationships. With a friendly atmosphere, we easily transitioned into
the introductory speech made by Jeffery Ahn, the director of Q& Education
Group, who explained the main concepts and objectives of the camp.

What are intractable conflicts? This was the question that was to
serve as the base of Conflict Consortium 2012.The main goal of the camp,
presented by Ahn and Prof. Lyman McLallen, was to learn how to accept the
existence of intractable conflicts while developing a “way out” for these
world-wide disputes. We were to view ourselves as future leaders of the world
who would, one day, find ways to dissolve destructive conflicts with
constructive solutions.

On the second day of the camp, we trudged into the room unsure of
what would happen next. After Ahn walked us through a conflict simulation, we
talked about the situations in Korea. Each group was given an issue in Korea to
research in preparation for a presentation on the final day of camp.

After some brainstorming, we watched a documentary called “Seoul
Train,” which told stories of North Koreans trying to escape their harsh life.
It was heartbreaking to see so many people suffering for freedom, and often
failing to obtain it.


As the day went on, our group became closer and closer, laughing
and making jokes. We worked intensely on our presentations about the conflicts
in Korea. Our topic, “Bullying in Korea,” was something we were all familiar with.
We decided to take on the challenge of making an artistic and informative collage
that depicts all of the factors that make this common, yet hardly acknowledged issue,
an intractable conflict.

After almost two hours of working on the project, it was time for
a barbecue party. From the backyard of one of the cabins, we could see the sun
set over the mountains. We watched the Olympics as we ate and bonded with students
outside our group.
However, we still had to finish preparing for our presentation.
Our group stayed up until 1 a.m. to work on our poster. We were all tired from
the day’s work, and our hands started to hurt from all the scissor work.

But of course, hard work pays off.

The next day when we presented in front of everyone, many people
were impressed by our collage. The eye represented how bullying is everywhere but
many people neglect it, and we portrayed all acts of bullying in the pupil to show
the severity of the bullying problem in Korean schools.
Each of the presentations was meaningful, and the effort that everyone
had put in was visible. By listening to each other’s presentations, we were
able to learn about various conflicts occurring in Korea and how crucial each
conflict was. This camp was a valuable program where everyone learned about and
discussed problems in Korea that we hadn’t really noticed or thought deeply
about before.


After giving our presentations, we worked on a film about stereotypes
about Korea. It was a special project for our team to promote awareness of the
typical stereotypes that are made about Koreans. The four of us were the
directors, and we involved all of the other students in portraying the
stereotypes on camera.

It took patient leadership to get everyone – even the youngest
students – to cooperate and do their best, but with everyone’s efforts, it
turned out quite well.
Right before we headed back, the teachers handed out awards to the
groups with the best presentations and the groups that earned the most points
from different activities.
Overall, Conflict Consortium was an unforgettable experience that afforded
us an opportunity to learn about intractable conflicts and their severity,
while also building new relationships.
Together, we worked as a family to cooperate and play our roles as
future leaders of tomorrow. We shared moments of discovery, teamwork and
laughter. And we are proud to have played a part in bringing attention to
conflicts around the world and raising hopes of resolving them.