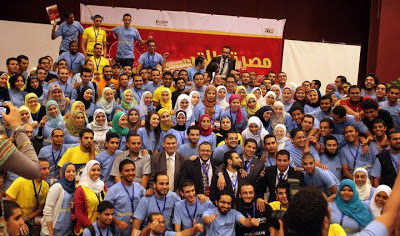 CAIRO, Egypt – Egyptian Engineering Day. If you haven’t been
there, then you have missed a once-a-year chance to be inspired, motivated and
more importantly, to connect with minds that know how to create, innovate and
give limitlessly.

On the other hand, if you
have attended as an exhibitor, volunteer or even a visitor. I must infer that
you are not the same person you were before the opening ceremony early this
month.

The Egyptian Engineering Day, organized annually by Egyptian board
members of the Institute of Electrical & Electronics Engineers, launched in
2002 as the first exhibition of its kind in the entire region for engineering
graduation projects.
Held at the Cairo International Conference Center, the event
paved the road for fresh engineering graduates to put their ideas into market
products that can compete with breakthroughs in engineering industry all over
the world.
I got to cover this year’s Egyptian Engineering Day as a reporter
for Youth Journalism international, from the initial preparations till the
closing ceremony and the distribution of awards and announcements of the
winning projects.
After a year and a half of political struggle and development
digression, we Egyptians were ecstatic to take the first step into the
battleground of innovation with unprecedented fierceness.
“There cannot be any
progress without democracy,” said Sherif Abdel Azim, founder and chairman of the
NGO Resala. “Revolution was the key to the progress.”
The entire EED committee starting from Chairman Amgad Ibrahim to
the youngest volunteer all worked collaboratively to not only supply exhibitors
with the chance to be distinguished but also to embed in their brains the interpersonal
skills and in their hearts the entrepreneurial spirit.
After giving an inspirational didactic talk titled ‘The change
game,’ Amr Elfass, the chief executive officer of ZAD Group, said,  “What
you love to do, is something that you can spend a lot of time doing it without
getting paid.”
The Made In Egypt program, aimed at emphasizing the need for
interpreting great ideas into industrial products, got started by the Egypt
GOLD team in 2005.
Many public figures attended, coming to witness this edifice of
talent and dreams of the next generation.
Former Prime Minister Essam Sharaf and Hany Mahmoud, minister of
communications and information technology, honored the summit by their
attendance and gave a boost to the spirits of the young engineers.
With more than 9,000 attendees, we
can say that Egyptian Engineering Day is not any more an expo but will be
considered from now on as an annual gala of originality.
Speakers representing companies, academic institutes and NGOs
participated. They played a role that might be referred to 10 years from now as
“The Dawning of the Innovation Era.”
Fadel Digham, research and development director of Egypt’s National
Telecom Regulatory Authority, said in his talk about recent trends in
telecommunications market and research that society is in the “GIFT era”
explaining that it included Google, the iPhone, Facebook and Twitter.