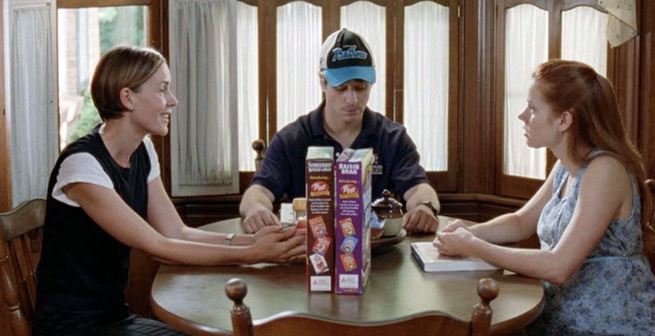 LA GRANGE, New York, U.S.A. — Junebug, directed by Phil Morrison, is a study of family life. The film was a gem at the 2005 Sundance Film Festival and clearly lingered in critic’s minds with a Best Supporting Actress nomination for newcomer Amy Adams.

Adams shines as Ashley, a very pregnant and very optimistic young woman who serves as the electricity in the film. Starring alongside Adams is Alessandro Nivola, The O.C’s Benjamin McKenzie, and Embeth Davidtz.

The film begins with a sophisticated art dealer named Madeleine (Davidtz) meeting a handsome man named George (Nivola) at an art show. The two marry very quickly and when Madeleine finds a new artistic talent lingering in North Carolina, she convinces George to let her meet his family, who live nearby.

The family consists of a quiet father, a scheming and suspicious mother, a mentally imbalanced brother (McKenzie) and his pregnant, happy wife (played gracefully by Adams).

The film studies the clashing of this new-aged couple with the old-fashioned, semi-dysfunctional family. Each family member holds secrets and troubles that can barely be kept amongst the paper thin walls of the traditional, cozy home.

Screenwriter Angus MacLachlan mixes comedy with drama in all of his scenes. In one particular scene, George and his brother face each other in the home garage.

The scene begins slow and forms into what looks to be a close moment between brothers, only to be stunted by McKenzie throwing a wrench at his brother, striking him in the head and making him bleed.

Events such as these are what make the film more real than anything else. And while some scenes like that may seem overdone and come off to the viewer as unnecessary, MacLachlan is attempting to portray the true life of a real American family.

With that truth come the awkward conversations with no escape, the anger between siblings, the silence that separates family members, and the tragedies that bring them closer together.

The film itself is slow-moving and ponderous in its scenes and characters.

Morrison clearly understands the intention of MacLachlan’s screenplay and interprets it here with patience and diligence. This same patience must be shown by the viewer in order to appreciate the film.

Junebug is a story of real people living real lives whose greatest achievements and greatest failures revolve around the base of their family.

Dan Mecca is a Reporter for Youth Journalism International.