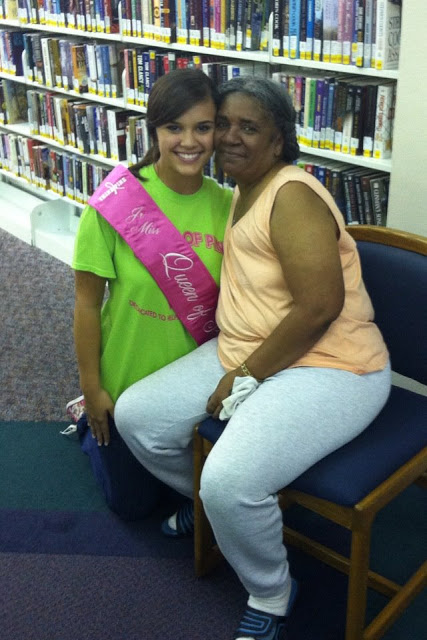 I was recently
crowned “Junior Miss Queen of Pink,” a coveted position that pageant girls
everywhere lust after; not just because of the gorgeous rhinestone encrusted
crown, the silky banner, or a permanent spot on the local parade route, but
because being Queen of Pink means something so much more.

Being a “Queen
of Pink” means that not only are you considered a queen at the Think Pink
festival – an event in October made to raise money for breast cancer awareness –
but you are an ambassador for breast cancer patients and survivors everywhere.
As I stood on
the stage of the pageant looking into the sea of people in the audience, a
crown was placed on my head as I was announced the winner. Of course, I was
very proud of myself and excited at my victory, but I had absolutely no idea
what was in store for me.
That crown and
banner would not begin to equip me for the journey I am embarking on. Just
being crowned a little less than a week ago, you would think that nothing
impacting would occur on my journey so far. Well, at least that’s what I
thought. I was so very wrong.
On June 26th, just
a couple days after the pageant, I met Lora Byers, an amazing woman and a
Crowley, Louisiana native.
She has three
children, 28 grandchildren, and two great-grandchildren, but she is also
currently suffering from breast cancer and undergoing chemotherapy. On top of
her breast cancer, she recently had a mastectomy, she has a mass on her neck,
and also a tumor on her brain.
Without
insurance, Byers is forced to pay for all of her treatments herself.
Upon hearing
her story, the Think Pink organization and the Queens of Pink knew what we had
to do. We presented Ms. Byers with a $500 donation to help with the cost of
treatment, as well as encouraging words, cards, and gifts.
She was so
appreciative, saying, “You never know how much support you have until you are
going through something. I am thankful for what you all are doing.”
Byers is not
the only woman whose life has been affected by the Queen of Pink organization.
Carol Ware founded
the organization in 2006 with the hopes of helping breast cancer patients in the
Louisiana parishes of Calcasieu, Beauregard, and Allen. Queen of Pink helps
those patients in financial need pay for treatments and other expenses.
As Queens of
Pink, we plan to donate to many more breast cancer patients over the course of
our reign.
I know even
after my reign is over, I will not cease to be passionate about breast cancer
awareness. Earning this crown has been a jumpstart on the philanthropy I will
continue to be involved with for the rest of my life.
For more information
about the Queen of Pink organization, please visit www.queenofpink.webs.com.