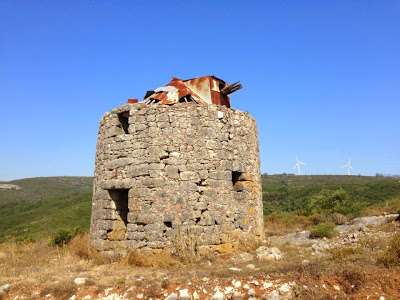 By Tom Vaughn
Junior
Reporter
Youth Journalism International
CORTICAL,
Portugal – Critical to every village, the windmills in Portugal ground corn and
wheat to make bread and grain.
Each
town has or had at least one mill, all of which were operating until about
1970.
While spending the summer in Portugal, I tried to visit at least one windmill every day. I learned a lot about them by talking with neighbors and village elders about these fascinating, ancient machines.

Cortical,
my grandparents’ village and my home when I am in Portugal, has two mills.
One,
built in 1100 by a Roman student who loved the area, is called Moinho Estudante and it operated until the 1970s.
The
windmills in Portugal are different from those in other countries – they’re
musical.
Each
sail of the mill had clay jars called buzios that were strapped to the wood so they
howled in the wind like blowing into a bottle.
Moinho
Estudante was
known in the area as the loudest mill around, and that’s saying a lot. The
immediate area, measuring about four miles or six kilometers, includes more
than 10 villages.
The
walls of the mill are coated in broken jars. When laborers built the windmill
long ago, they used the jars in a cement mixture to hold the ancient stones
together. Nothing was wasted.
Today
the jars of this mill are shattered on the ground, littering the entire area.
The
sails of the mill have been missing since before 1987.
The
other mill in my village has walls one meter thick, with no cement. This mill’s
westernmost wall collapsed in the 1980s, and fire destroyed the remaining wood.
In
Carvalheiro, the next town over, there is a mill hidden behind an olive grove
that belonged to my great-grandfather. My grandfather’s cousin discovered it
and refurbished the interior as a living space.
The
windmills in the towns of Vale Da Trave and Fontainha have also been restored
and are used as homes.
Porto
de Mos, a town 10 miles to the north (it’s named ‘mos’ because mos is the stone of a mill), has more than
12 mills spanning three mountains that circle the town
In
2009, the last mill of Porto de Mos stopped working.
Mendiga
is a town with three mills, each of them abandoned. One of them, however, is
being refurbished back into working condition.
Amais
de Cima, a village south of mine, even had a water-powered grind mill, called
Moinho da Agua. This water mill was abandoned in the 1960s, and a house built
on its foundation.
Over
time, the windmills of Portugal gave way to modern factories and electricity,
though until the 1950s, some mill owners actually took wind-powered mills, and
attached engines to them, rather than use natural wind power.
A
half century ago, the horrendous economy in Portugal prompted thousands of
people to leave the country, abandoning houses, farms, and its beautiful,
musical windmills.