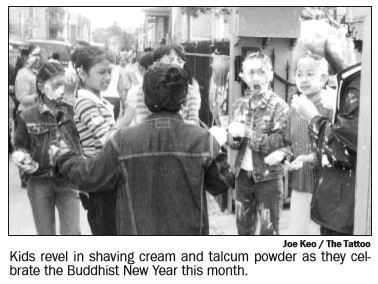 As their fellow Buddhists did around the world, hundreds of Cambodians, Thailanders, and Laotians gathered this month to mark the New Year with celebrations and ceremonies at the Providence temple.

The holy celebration began somberly with prayers but evolved into a festive atmosphere.

Hoping for blessings, young people brought gifts of medicine and candles for their elders. Families bring their own home-cooked meals to eat and to give to monks as a show of respect.

Teenagers lined up at a nearby booth to receive their fortunes from elders and monks sit, pray, and recite holy words to bring in the Buddhist New Year. 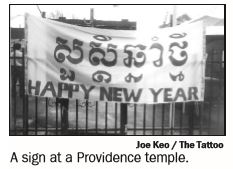 New Year for some Southeast Asian countries is celebrated according to the Buddhist calendar and falls in April. This year, the three-day celebration ran from April 13-15.

While here in America people freeze their butts off in January, Asians have it good with their springtime New Year.

On a small urban street of Providence is a Cambodian Buddhist temple. It’s something like a shack, since there’s not a lot of city support or funds to help build a real one.

At the celebration this month, masses of people gathered into the gates of the temple’s front area early in the morning. Incense filled the air while kids and teens roamed around in and out of the temple vicinity.

Morning was a time of prayers for the adults, but kids seemed bored.

The mood changed after the clock struck evening time.

People feasted on rice, noodles, and soup. Kids started to have their own childish celebrations. A white cloud of baby powder appeared out of nowhere.

A kid ran full speed ahead with a handful of shaving cream.

The infamous powder and cream fight is a modern New Year’s tradition for Cambodian, Thai and Laotian-Americans. Kids run around chasing each other and covering everybody including the adults in baby powder and shaving cream.

This all started one year when a bunch of bored kids decided they were being left out of the very extravagant New Year’s celebrations of their counterparts back in Asia. They decided to have some fun of their own, so they got some powder and shaving cream and started a trend.

Young Larry Loch, who came just for the powder and cream fight, was covered from head to toe in white powder.

Julienna Som, Mariano’s partner in crime, dashed by with shaving cream on the strands of her hair. “It’s fun getting messy!” Som squealed.

The two girls then ganged up on a small boy who had previously dumped a whole container of baby talcum all over Som’s friends. The poor little boy was soon engulfed in white powder.

The cloud of baby powder and splatter of shaving cream ended as it got late.

Families and friends headed back home to revel in their own New Year’s celebrations, some in cars and others on foot.

A Cambodian flag fluttered from the top of one departing car.

“Khmer (Cambodian) Pride,” the driver yelled out, his flag waving in the wind as the New Year cheer faded away.