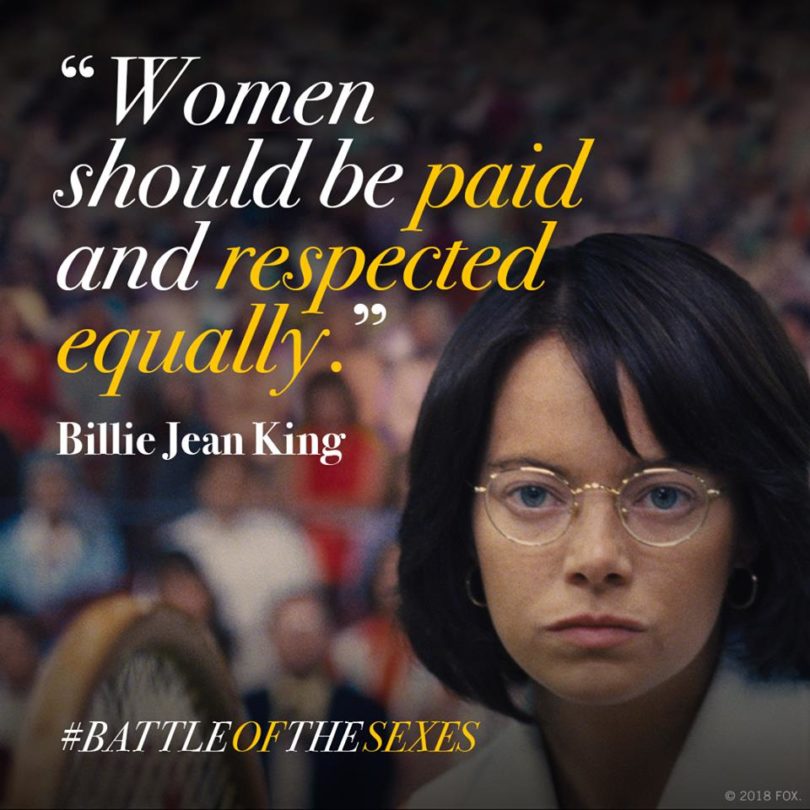 From the "Battle of the Sexes" official Facebook page.

Battle of the Sexes, a film about real events that took place in 1973, inspired me as an athlete, ally, and feminist. Not only is it a powerful sports movie, it’s an inspiring equal rights film as well.
The movie, which came out in 2017, follows tennis star and equal rights activist Billie Jean King (Emma Stone) as she strives to eliminate the pay gap between male and female tennis players.

Towards the beginning, King’s life was on track. She had a supportive boyfriend, a great team of her fellow women’s tennis players, and was the best female tennis player in the world.
After winning even more, she learns that the winner of the men’s game is earning a significant amount more than the women’s winner. She then began a campaign to end the pay gap between men and woman in tennis.
She went on tour and gave up her spot as a member of the American Tennis Association. As the movie comes to a close, King battles Bobby Riggs (Steve Carell) in a tennis match, where she is determined to prove that she is just as good as Riggs, who was the best tennis player in the world for a long time.
She beats Riggs by a tremendous amount, and proves that women are just as capable as men, and thereby deserve the same pay. While King was on tour, she came to the life-altering realization that she is a lesbian.
Throughout this film, viewers see King not only trying to conquer sexism in the sport of tennis, but also forced to endure homophobia, and not being respected for who she really was.
This movie taught me that sometimes in order to accomplish your goals, which in King’s case was to achieve equality in tennis, it can be necessary to make personal sacrifices that will permanently impact your life, but be worth it in the long run.
The women of the National Tennis Association quit the largest tennis group in the world to go on tour and make a point. If things hadn’t gone their way, it could have been disastrous, but it worked out for everyone, and had a major impact on the treatment and respect of women tennis players.
Although this movie took place in the ‘70s, the concepts still hold true today, and King’s story continues to inspire people.
Now 75, King hasn’t stopped fighting for her beliefs. She continues to work hard for equal rights. Just last month, in an interview with Forbes, she discussed the importance of not having to do as society dictates.
“We’ve been socialized – girls have been taught to be perfect and boys have been taught to be brave,” King told the magazine. “Don’t let yourself think that you have to be perfect.”
Battle of the Sexes communicated that and clearly demonstrated the power of standing up for what you believe in.

Isabel Slippen is a Junior Reporter with Youth Journalism International.