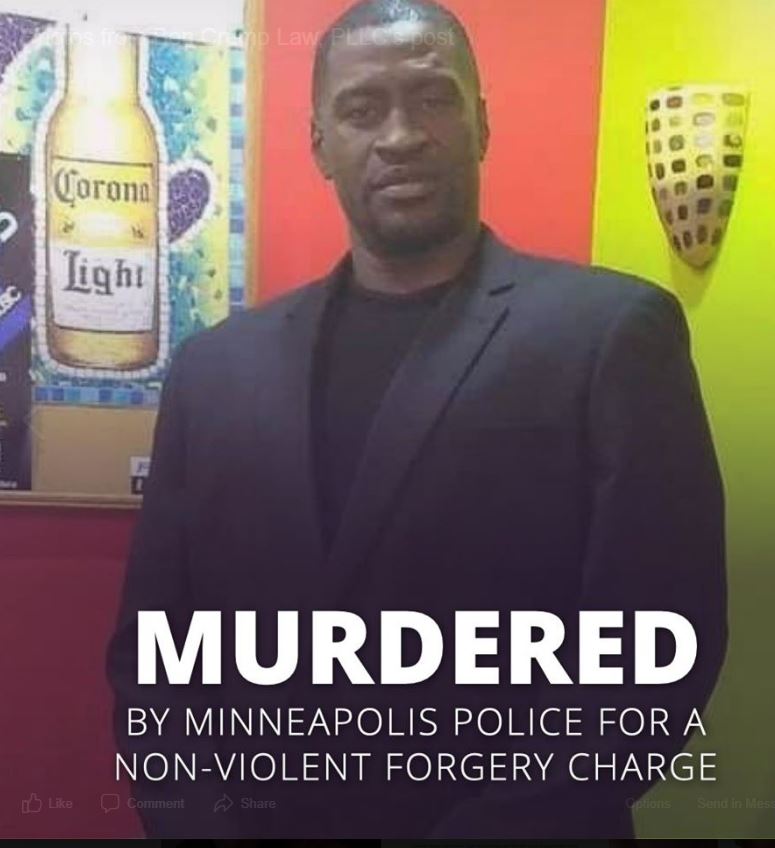 The lawyer retained by the family of George Floyd, a Minnesota man killed while in police custody, released this post on his firm’s Facebook page. (Ben Crump Law, PLLC)

SYDNEY – The horrific murder of George Floyd on May 25 made him another victim of the white supremacy that chokes modern society.

George Floyd’s life was taken by yet another racist, white police officer who swore an oath to “protect the community.”

So what possible crime did he commit to receive such a severe punishment? The only crime he committed was being black in a country of hypocrisy and double standards.

This makes us all wonder how racism is getting worse in an allegedly progressive society. But the truth is, racism is not worse, it is simply being exposed more and more.

With videos being leaked and people sharing experiences, we are slowly beginning to see the true colors of systematic racism. To all those people who claim that the world is “better now” and racism is minimal, than explain how these murders are being committed in broad daylight and being justified.

How are these police officers allowed to oppress some communities while favoring others? How is it that the black community is targeted even after America is built on their backs?

Floyd’s murder is nothing society has never seen before.

Why, I ask you, has it taken us 400 years to solve a problem created by the transgressors themselves? This started from slavery and has continued since then.

To call society modern is the biggest overstatement of the century. We are not modern nor enlightened. We are stuck, like every century before us, in the cycle of violence and brutality that paints a big red target on the backs of communities of color.

We are also ignorant. Our inability to take charge and change is the biggest reason the world is still in the white man’s fist.

So how do we take charge, speak up, make a difference?

We listen to the pain of the black community. We hear their cries and instead of walking away, we speak up. We yell until our lungs burst and we don’t stop until justice is served.

What does it matter what your skin color is, if another human is being oppressed and exploited, won’t you speak up? Or will you be a bystander, whose silence is equivalent to the violence of the oppressor?

Let’s make a difference to change society for good. This cannot be another #trending topic on twitter. We want real change!

Spread awareness through social media or just by talking to someone.

But the most important change we can create is one within ourselves. Now is the time to change your own ideas and correct the mindset of your family and friends.

If you hear a racist slur, call the person out. If we all starting changing ourselves, maybe one day we can strive to be the modern society that we so desperately try to create.