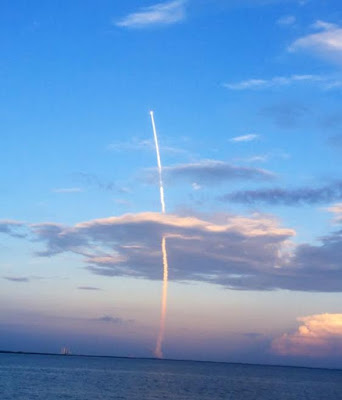 The July 23 rocket launch from Cape Canaveral, Florida as seen from Cocoa Beach. (O.D. Wright/YJI)
COCOA BEACH, Florida, U.S.A. – I stood on a bridge over the ocean in awe and wonder as a Delta IV rocket blast off and make its way into the
galaxy.

Watching the rocket leave Earth on sent chills down my spine and made me realize that with hard work, anything is possible.
Ever since childhood, I’ve loved Star Trek. While my family and I raced down the road Thursday to get to an area where we would be able to see the launch, I decided to play Captain Wright and made the rest of my family join in and adopt a role in my own little Enterprise.

After racing down unfamiliar roads – with my brother, Sergei, and boyfriend, Garrett navigating – we finally made it to a bridge recommended for viewing.
At T-minus five minutes on July 23, my mock fleet and I jumped out of our vehicle and ran to the viewing area. Dripping from the salty waves and clad in swimwear, we were a sight, but never mind. We were on a mission.
My eyes scanned the ocean, looking for some kind of action that would show the shuttle was launching. Suddenly I heard a gasp and I saw it.
My gaze landed on a spaceship, and with an explosion, it discharged from land. 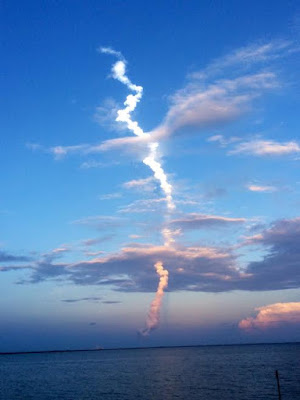 The view of the rocket launch from Cocoa Beach. (O.D. Wright/YJI)

I stood, starry-eyed, in the same place where people watched the Space Shuttle Challenger exploded, their hearts in as many pieces as the
ill-fated spacecraft.
With my feet planted in the same spot as those who’d watched with glee as the Apollo missions blasted off successfully, I viewed the Delta IV rocket make its way to the mystery that is outer space.
The launch I saw was a product of United Launch Alliance. It took off from Cape Canaveral Air Force Station with a communications satellite for
the U.S. Air Force.
It was the seventh Wideband Global SATCOM communications satellite for the Air Force. These communications are used to convey important
information to America’s armed forces.
While I watched the satellite launch, I realized that the United Launch Alliance was not that different from my beloved Star Trek.
Space flights helped to explore strange new worlds, as seen with the Apollo Missions to the moon. To boldly go where no man has gone before with Atlas V in the spring, which carried instruments to help study the mystery of how magnetic fields around Earth connect and disconnect, explosively releasing energy via a process known as magnetic reconnection. It is a fundamental process, which occurs throughout the universe.
And much like the Star Trek Enterprise, space exploration strives for peace, which brings us back to the launch I witnessed of a Delta IV, which made the world more peaceful for providing a way for communication to America’s armed forces through the satellite.
Space is seemingly without boundaries, and thanks to technology and the phenomenal human brain, we are exploring, and utilizing it, more and
more every day.
I had an experience worthy of awe that day. Watching the rocket ascend toward the infinity of the heavens – with my own feet planted here on
Earth – I felt the majestic glory of the stars.
O.D. Wright is a Junior Reporter for Youth Journalism International.
***
Your tax-deductible contribution can help support Olivia Wright
and other students at this nonprofit at:
www.HelpYJI.org