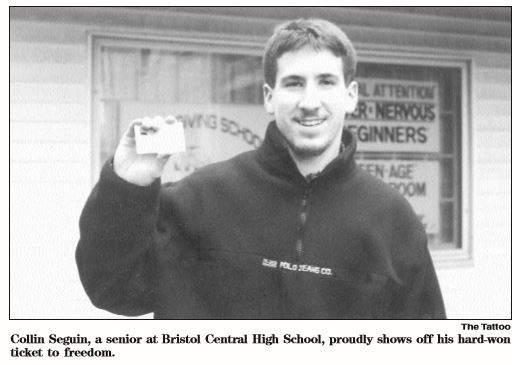 Bristol, Connecticut, UNITED STATES – My story starts at Bill’s Driving School on West Street in Bristol. Last year, I signed up for driver’s ed there.
It was the start of a journey that every teenager takes, something they look forward to their whole life. It is the journey necessary to receive that all-important piece of plastic that means freedom.
Two years ago, the state of Connecticut took it upon itself to make freedom a bit tougher to come by. According to the new law, it is now necessary to obtain a permit, and wait four to six months (depending on whether or not you take a driver’s education classes) to take the license test.
I lived to tell my story, and would like to share it with you.
A few days after my first class at the driving school, I took the test for my learner’s permit.
Getting a learner’s permit is like getting a fruitcake for Christmas. It is something, but not what you want.
That little piece of cardboard gave me the right to drive — as long as I had a licensed driver 21 years of age or older alongside. Since I was taking driver’s ed through a certified school, my permit lasted four months.
This is where things got interesting.
One good thing about Bill’s Driving School is that, while you must still attend 15 classes and 8 hours of driving, you can take these requirements at your leisure. Because of playing baseball, I couldn’t show up at too many classes — so it seemed like I’d be in driver’s ed forever.
The material isn’t exactly riveting, and the videos that are shown look like they were made by my little sister, with acting straight from a bad sitcom.
You could understand that I didn’t feel like I would ever get my license.
As August rolled around, I started to pile on the classes. Now I was ready to drive. (In other words, the real fun was starting.)
Every teen feels that he’s ready to get behind the wheel. I know that’s how I felt.
However, my mind changed quickly. Really, you would not believe how mad an instructor gets when you slam on the brakes.
The driving portion of the course is where you learn such intricacies as left-hand turns and 80-year-old drivers. Guess which one was harder to deal with.
After the classes and driving hours are done, and the permit period is over, it is time to take the license test.
This can be done one of two ways. You can either take it through the driving school, which is more convenient but also costs more, or take it at the Department of Motor Vehicles, where it’s
less expensive, but it’s harder to make an appointment — probably because they actually work what must amount to three hours a week.
I showed up to the driving school for the driving test,where a few others I knew awaited the nerve-wracking event. I was the first to go out for the road test.
Before you go out, you get a checkpoint sheet so that you can look it over. There are three areas of grading. In two of the areas, three wrong moves means that you are making another
appointment with the DMV. In the last part, the critical driving skills section, one wrong move means the same thing.
I stepped into the car, greeted by one of those great DMV instructors. This nice fellow had the personality of a wet rug, and the kindness of an executioner (which is probably perfect for the
job).
“How are you?” I asked.
He responded, “Well, my coffee is cold, it took them too long to serve it to me, and I had to show up here early this morning. Now get in the car and start.”
Oh, boy.
I stepped into the car, turned on the engine, and was off. I thought I did pretty good.
However, when I pulled into a parking space to end the test, there was a long silence.
Breaking the ice, I finally asked, “Well, how did I do?”
He then gave me that look, the one someone gives you when you either asked a stupid question or said something really dumb.
The instructor reached over the wheel, picked up his red pen, and circled the “FAIL” box over and over and over.
When the ink finally bled through the pad, he dismissed me to go across the street to the driver’s school and report the news.
Well, if I ever wanted to step in front of a speeding car, that was the time. Of course, the instructor probably would have marked me down for that, too, so I just waited to cross the street.
The next time I took the driving test, it went better than expected until the end, when I had to pull into a parking space. I misunderstood the instructor’s order, and almost turned into
the wrong space.
“Hey, I don’t mean for you to get creative,” the instructor said. “Just pull into the space I said to.”
With an icy cold dread, I pulled in, turned off the engine, and again prepared for the worst.
After telling me my mistake, the instructor circled the “pass” box on my test.
I shook his hand repeatedly until he said, “Glad to be of service, but let go of my hand.”
I went into the driving school to share the good news in my humble way. (Actually, I shouted “Yes!” and jumped in the air before I walked in.)
Two days later, I went to the New Britain DMV to get my license.
Now was the easy part. I was going to go up there, smile, and get a good picture taken.
I sat down in the chair and got ready to pose. The cameraman interrupted me, saying, “There’s a problem with the camera. Just sit tight.”
OK, no problem. I could wait. I just want to be ready when ….
FLASH!!!!!