By Myah Guild
Junior
Reporter
Youth Journalism International
DUNSTABLE, Bedfordshire, England – Salmon Fishing in the
Yemen is just one of many diverse films out
this year, but one worth seeing. 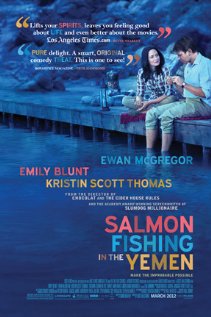 Directed
by Lasse Hallström (What’s Eating
Gilbert Grape, Dear John) the story follows
Dr. Alfred Jones, played by Ewan McGregor, as he tries to fulfil the fishing dream
of Yemeni Sheikh Muhammed, played by Amr Waked. A pushy assistant, eloquently
named Harriet Chetwode-Talbot
and played by Emily Blunt, accompanies them.
The
interesting plotline – the transporting of salmon from Britain to enable salmon
to be fished in the Yemen – captures the imagination right from the start and the
witty repartee exchanged between McGregor and Blunt’s characters make for some
hilarious moments. The ease and natural chemistry between them adds to the film’s
comfortable and relaxed feel.
Injecting
some stern reality is Patricia Maxwell, the prime minister’s savvy press
secretary, portrayed brilliantly by Kristin Scott Thomas. Her sharp and forthright
character juxtaposes well with the casual feel of the rest of the film.
Excellent
scenery as well as varied filming locations makes for some stunning and
enjoyable shots as the viewer is transported from the Scottish lochs to the
Yemeni desert in a matter of minutes.
Adding
to the tranquil of the story is Blunt and McGregor’s implicit and slow love
story, which is refreshing and new, although it is interrupted by the dramatic
return of someone from her past.
Overall,
Salmon Fishing in the Yemen is a calm
and effortlessly funny comedy-drama with a great cast, excellent scenery and a
fresh, intriguing story to tell.