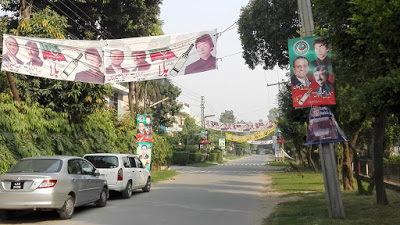 Not far from a school in the Shadman region of Lahore, Pakistan, which served as a polling place on Sunday, banners for candidates hung on the street. (Arooj Khalid/YJI)

LAHORE, Pakistan – I used to think 2015 was going to be the most important year of my life. Graduating high school, starting college, turning 18, getting a driver’s license, all happened in the same year and I was very happy about it.

What I didn’t know, or expect, was that this would also be the year I cast my first vote.

The general elections in Pakistan took place in 2013, but the political party Pakistan Tehreek-e-Insaaf (PTI), which lost the election, claimed that voting in one area of Lahore was rigged. The party demanded – and eventually got – a new election for that single constituency, which includes my neighborhood. 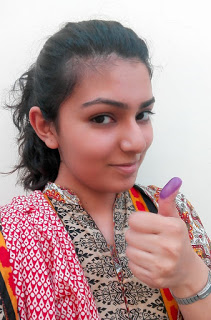 The vote was for local representatives to the national and provincial assemblies.

An election banners carries the image of Imran Khan, the chairman of the Pakistan Tehreek-e-Insaaf party. (Arooj Khalid/YJI)

New voter lists were issued and this time, my name was on them, too. I felt recognized, that my voice and actions mattered much more to this country. I was one of many individuals who would decide the future course.
The Sunday morning was bright and sunny, and as I approached the polling station, there was a huge crowd of cars, men, women and children alike. The banners of different political parties decorated the streets and the people’s eyes shone with enthusiasm.
Cars with stuffed tigers on them and children with cricket bats displayed the elective symbols of the two majority parties.

As I approached the school where the polling was in process, a policeman checked my identification, then upon entering the school, army men showed me to a separate women’s check
post where lady guards checked me for any suspicious items.

Mobile phones, cameras, sharp items – none of that was allowed inside. The security was really tight this time to eliminate any chance of irregularities.
I went inside to the polling station, where there was a queue of women waiting to cast their votes.

Posters show Sardar Ayyaz Sadiq of the Pakistan Muslim League – Nawaz on a street in the Shadman area of Lahore. (Arooj Khalid/YJI)

In Pakistan, women and men vote in separate areas at the polling station.
Senior citizens, middle-aged and young women, and those in the initial years of adulthood like myself, gathered there.

After some time, my turn came. I showed my identification and had my thumb inked to confirm that I
had voted. A separate permanent ink mark guards against people voting more than once.

I filled out my paper ballot and dropped my vote into the ballot box.
I remember dropping it slowly, as to savor the satisfaction of my first vote. When I walked outside, I was a responsible Pakistani citizen. I had done my duty and raised my voice in the defining of our future. And that feeling shall now remain with me for the rest of my life.

***
Your support helps students like Arooj Khalid and others served by this organization:
www.HelpYJI.org