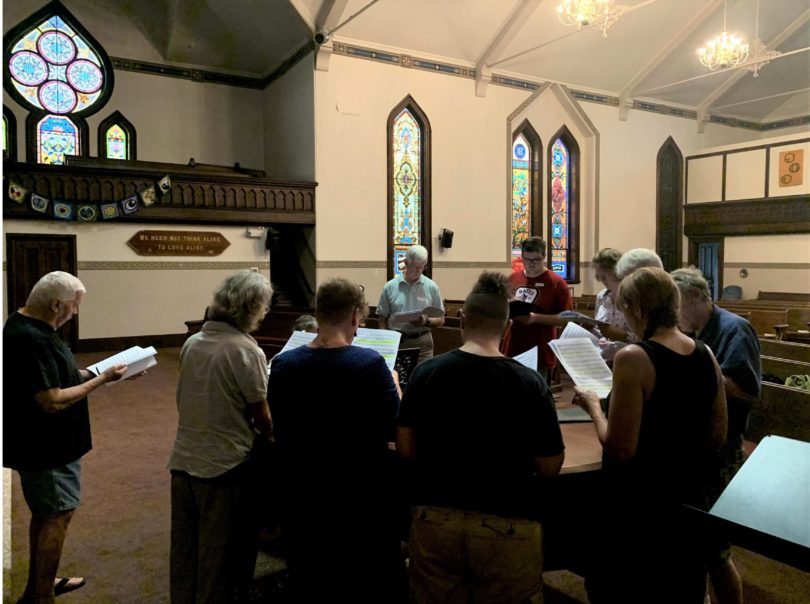 Tenor and bass singers gather around the piano in the sanctuary of the First Universalist Church for a sectional rehearsal of "The Bill of Rights: Ten Amendments in Eight Motets." (Owen Ferguson/YJI)

AUBURN, Maine – Each Monday evening, a diverse profile of singers with different music abilities set aside some time and make their way to a local church to practice tirelessly in the run up to the Bill of Rights concert.

The Sept. 22 performance is a fundraiser for Youth Journalism International, a local charity. High profile guests including U. S. Sen. Angus King and U.S. Rep. Jared Golden, who both represent the area in Congress, are expected to grace the event.

To ensure a flawless spectacle on concert day, the nearly 40 singers work hard to hone their skills.

They also sacrifice personal time for the weekly rehearsals.

For many participants, the music’s unique melodic line and rhythm are great challenges.

“The music itself doesn’t have melodic line so it’s hard to anticipate the next note. I always miss a few notes,” said Maggie Diamond-Stanic, a research biologist who recently relocated to Lewiston, Maine.

For Bets Mallette – a freelance researcher and writer with no prior music experience – it was reading the music itself. The score, she said, is “like a foreign language” and is the greatest challenge for her.

In the face of adversity, however, many found ways to overcome their respective difficulties.

Diamond-Stanic, who is also a member of the Maine Music Society, added that the weekly rehearsals were effective in helping her get familiar with the music and reduce her chance of committing an error.

Mallette, who sings tenor, said she started getting “pretty good at it” and is “more comfortable” thanks to support from the group and from her partner Stephanie Hughes, an experienced singer who is also part of the concert.

Kathy Bidwell, another singer from Lewiston who also faces difficulty in reading a musical score and who is a self-described audio-person, found the practice tape recordings of previous rehearsals and performances of the same musical particularly useful for self-practice sessions at home.

For some, being at the rehearsals themselves is a challenge. 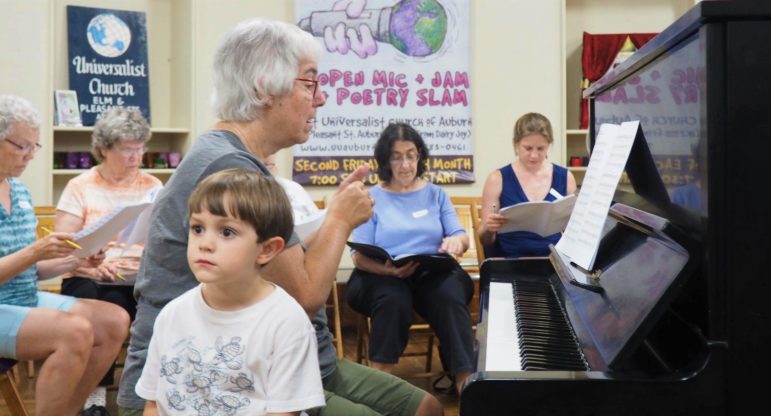 At the piano in the vestry of the First Universalist Church, Shelley Rau of Turner, leads a sectional for sopranos and altos while keeping her young grandson near. (Owen Ferguson/YJI)

“Just having a different group of singers is challenging as it’s summer and people are out on vacation for legitimate reasons,” said Shelly Rau, a retired occupational therapist and long-time Maine resident who is singing alto.

Having not known that her four-year-old grandson from Massachusetts was staying with her on the day of one of her rehearsals, she found a compromise between practice and baby-sitting by bringing him to the rehearsal.

Work schedules were in the way of rehearsals for Hughes, who is originally from Scarborough, Maine.

But fortunately for Hughes, she was able to find a colleague at the group home where she works to cover her shift during rehearsal hours, making it possible to attend.

It sounds like their efforts will pay-off on the Sept. 22.

Selvaganeshamoorthi Balakrishnan is a Correspondent with Youth Journalism International. YJI’s Owen Ferguson took the photos for this story.