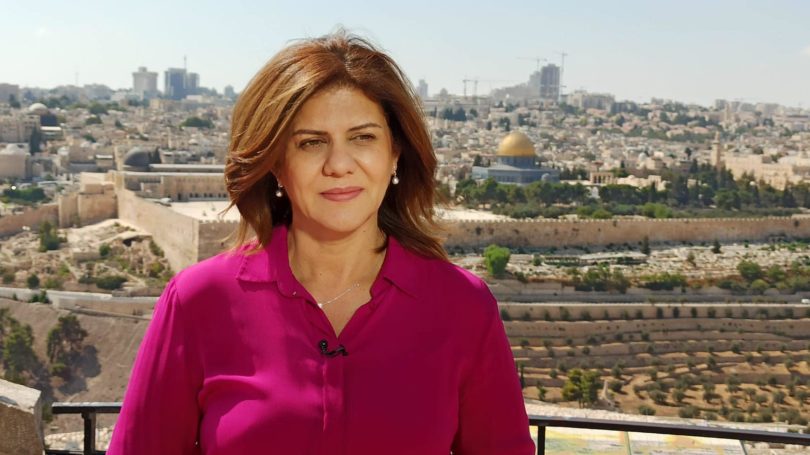 Shireen Abu Akleh in an image posted May 2 on her Facebook page.

“I chose journalism to be close to the people. It might not be easy to change the reality, but at least I was able to bring their voice to the world.” – Shireen Abu Akleh

The tyrant fears not only a sword in defiant hands, but a pen in determined ones. This article is a tribute to the latter.

Al-Jazeera reporter Shireen Abu Akleh, a Palestinian-American, was shot in the head today while covering an Israeli Army operation in the West Bank town of Jenin, according to the Committee to Protect Journalists, a New York-based organization.

Her colleague, Al-Jazeera producer Ali al-Samoudi, was also shot and sent to the hospital with serious injuries.

Both were clearly identified as members of the working press at the time. A photo of Abu Akleh on the ground after the shooting shows the word “PRESS” on the back of her vest.

Al-Jazeera said the journalists were targeted. The Committee to Protect Journalists has called for a full investigation.

Abu Akleh was beloved across Palestine and the Arab world alike for her bravery and dedication in covering the Israeli occupation and genocide of Palestine.

The tyrant fears a pen in determined hands, and it is for this reason I write this tribute, though I may not have much to add to the overall discussion surrounding her death. But that is the unfortunate nature of the Palestinian struggle – it is a broken record on repeat. The bombing, the killing, the detaining, the suppressing, the mourning, the protesting.

Every day, Palestinians are forced to repeat the same basic talking points to a world determined to ignore them: that genocide is bad. That Israel should be held accountable for its war crimes. It is sickening and infuriating, and I say this as a non-Palestinian Arab living in the United States, who has never had to live in the circumstances that Palestinians face.

I say this as a student journalist who looks up to brave figures such as Abu Akleh for the amazing work they do, but have thankfully always been able to speak my mind from the comfort of my own home, without having to worry about being shot dead for it.

Imagine, then, what Palestinians on the ground must feel on a continuous basis. What they must feel knowing that one of their most dedicated journalists has been brutally murdered.

Just as Abu Akleh’s life was a testament to the Palestinian struggle, so was her assassination. Not only was it a testament, but a harsh reminder of Israel’s perpetual mission to silence and subjugate any Palestinian voice that dares to speak the truth of their oppression.

According to data shared by Reporters without Borders, 28 journalists in Israel and 30 others in Palestine were killed, imprisoned, or disappeared since 2017.

In May 2021, Israel bombed the Al-Jazeera and Associated Press offices in a series of airstrikes on Gaza.

Abu Akleh’s death is certainly not the first nor the last of Israel’s crimes against reporters seeking to cover the truth.

Israel relies on the suppression of the Palestinian voice in the media to ensure its own impunity. This is clear in their systematic targeting of reporters, in the suppression of Palestine-related hashtags on social media, and in Western journalism’s continuous undercoverage and biased reporting of Israel’s crimes against Palestinians.

Abu Akleh, and all of her fellow journalists senselessly killed, dedicated their lives to fighting against this very problem – against the tide of the mainstream media as it attempted to undermine and draw the world’s attention away from Palestinian suffering.

It is up to us to honor their legacies and to continue amplifying the voices they gave their lives for the world to hear.