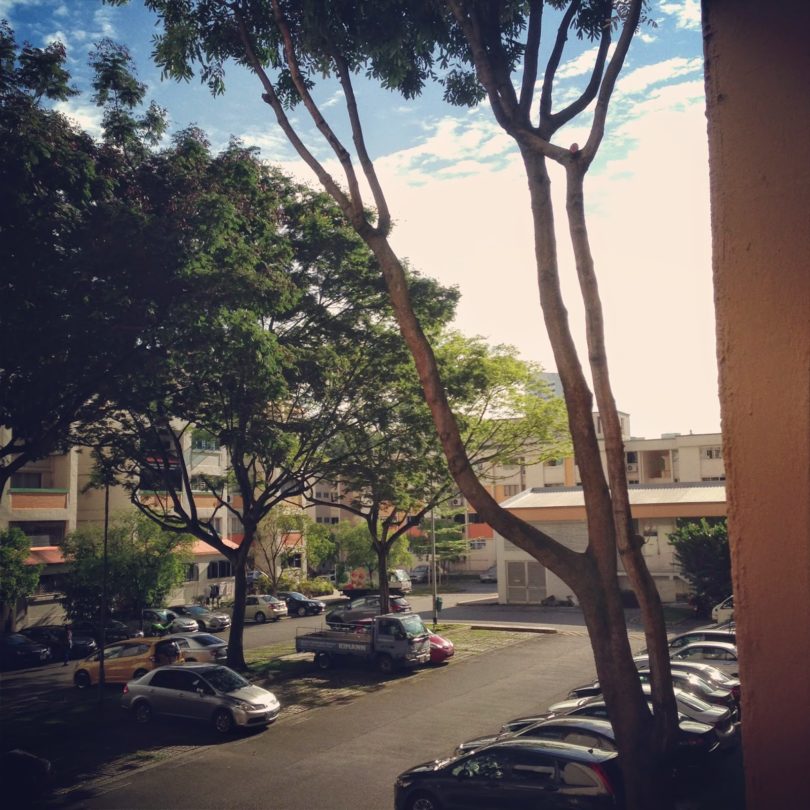 Today is a clear day in Singapore, but when the air is thick with haze from pollution, it's not possible to see the flats on the opposite side of the parking lot. (Selvaganeshamoorthi Balakrishnan/YJI)
SINGAPORE – While demonstrations organized by green-movements swept across the globe Monday demanding for greater action against climate change, great strides have been made in the Asean regional bloc – a consortium of Southeast Asian nations – to resolve trans-national environmental problems.

Last week, the Indonesian parliament agreed to ratify the Asean Agreement on Transboundary Haze Pollution, signaling commitment from Indonesia’s political elite to act on serious environmental calamities that have adverse effects outside its borders.

Haze from Indonesia is a big environmental problem in Southeast Asia affecting neighboring nations, including Singapore, Malaysia and Thailand.
Last year, a record haze pushed Singapore’s Pollutant Standards Index into the hazardous range, forcing schools in the region to close and confining individuals to their homes.

A week ago, a less intense haze shrouded the republic, prompting authorities to place the reading in the unhealthy range.
Annual forest fires that are responsible for the haze are mostly triggered by unscrupulous land clearing methods and the usage of ‘slash and burn’ agricultural practices.
Previously, despite the Indonesian government outlawing such practices, impunity – due to the lack of law enforcement – has led to farmers and conglomerates still continuing to adopt such methods of land clearing.
Joko Widodo, Indonesia’s president-elect, has placed tackling environmental problems at the head of his agenda.
Forest fires on the island of Sumatra and the weather phenomenon El Nino, have also been known to exacerbate the haze situation in the region.
Singapore is moving towards imposing fines on companies if haze from a fire on corporate land adversely affects the nation.
Despite the multitude of resources directed at curbing the haze situation, authorities admit that results will take time.
Globally, the increased public awareness of the effects of pollution and climate change have prompted citizens to demand that the world economy shift from reliance on hydrocarbons
and other polluting industries to greener industries sources of energy.
Selvaganeshamoorthi Balakrishnan is a Junior Reporter for Youth Journalism International.
***
Your tax-deductible contribution can help support this nonprofit at
www.HelpYJI.org