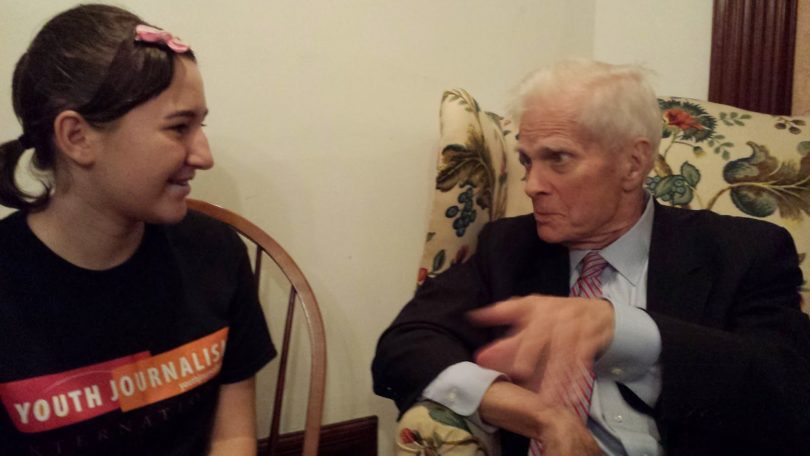 Yelena Samofalova of Youth Journalism International interviews Librarian of Congress James Billington. (YJI)
HARTFORD, Connecticut, U.S.A. – Stories are essential to understanding the world – far more important than any theory, according to James Billington, America’s Librarian of Congress.
“A story always brings people together,” Billington said. “You want to hear the story. You want to know how it ends.”

Any good story is worth reading, said Billington, who has led the Library of Congress since 1987.

“The human brain is hardwired, to use contemporary language, hardwired for narrative, for stories,” he said. “We’ve had an overload of theories, isms, all kinds of things. They’re very abstract. Stories are always about people.”
In an interview with Youth Journalism International, Billington, 85, talked about the importance of reading and recommended some of his favorite books.
As only the 13th person to hold the position of Librarian of Congress, Billington has led the effort to make many of the library’s historical and cultural documents available online. He’s also used the post to reach out to other countries through bilingual projects with national libraries worldwide, according to his biography on the Library of Congress website.
“The world is becoming much more inter-related, all our communications, all our economy,” said Billington, a scholar who has written several books on Russia. “You have to listen to other people’s stories. Then you find out what’s different about them. And that doesn’t mean it’s hostile. It’s interesting, because it’s about people. You enjoy those stories and you get a greater appreciation for your own story.”
Congressman John Larson, a Connecticut Democrat who called Billington a “world leader,” described the nation’s top librarian in literary terms, referencing the kind, selfless and wise wizards from the Lord of the Rings and Harry Potter series.
Billington is “the equivalent of Gandalf and Dumbledore,” said Larson.
He was thinking the other day, Billington said, about the stories he’s read to his 13 grandchildren and realized that more than half of them didn’t originate in the United States, but came from many lands.
He suggested that stories can be the key to understanding the unfamiliar.
“You can like somebody else’s story whereas you don’t like somebody else’s theories,” said Billington. “If I were to tell you, you ought to read somebody’s argument, you ought to read somebody who makes a lot of statements, well, it’s good to do that, but it’s better to listen to a story.”
The most important thing for young people to do, he said, is read as many stories as they can before they go off on their own.
“The most important thing you can do is read, because if you can’t read, you’re not going to get anywhere,” he said.
It isn’t possible to understand your own story, Billington said, until you can relate it to someone else’s experience. He said relationships between young people and older people can be especially important.

What should young people read?

“Above all, read poetry,” said Billington.
He also recommended the Bible, but not necessarily for religious reasons.
“The Bible is mostly parables. It’s mostly stories. It’s not a bunch of dogmas,” he said, adding that dogmas “divide people.”
But the book that meant the most to him, Billington said, was Leo Tolstoy’s War and Peace. It wasn’t because of the keen interest he had in Russia, though. That came later in life.
“I was brought up in Philadelphia, which was sort of cut off from the world. We were in our own little world.”
But suddenly, he said, he was in the big world of War and Peace, a “huge novel” of more than 1,000 pages.
He picked it almost by accident. As a junior high school student, he said, he’d look for the shortest book whenever he had a book assignment, just to get it done.
But suddenly, he said, a new translation of War and Peace came out through the Book of the Month Club.
“World War II was going on,” said Billington, and America was just entering the war.  “War and Peace is basically about two things. It’s about war, and it’s about families.”
And those were themes that anybody could understand, he said.
He admitted that some of his motivation might have been to read a bigger book than anyone else, since he had a reputation for reading short ones.
“Partly it was bravado,” he said. “But once I got into it, it was about a war and I could see that Hitler was making the same mistakes that Napoleon had made, invading a big country like Russia and underestimating how much people will fight for their own native land.”
Not everyone will want to read such a long book, said Billington, who said he was a “conceited little brat” for picking the book simply because of its size.
A shorter, but also great Russian novel, he said, is The Death of Ivan Ilyich, also by Tolstoy.
Stories from other time periods can resonate with modern readers, according to Billington, who recently visited the Harriet Beecher Stowe Center in Hartford.
Stowe’s masterpiece, Uncle Tom’s Cabin, got people to think about the uncomfortable subject of slavery, even if they didn’t want to, by putting it into the narrative.
“It’s a story about real people. Uncle Tom suddenly becomes a personification of things that are in the real world. It makes a connection. It gets to people,” he said. “It’s a great story.”
Drawing from the same period of the American Civil War, Billington called President Abraham Lincoln’s Gettysburg Address the greatest political speech ever made. In the speech, Lincoln honored the sacrifice of the many men who lost their lives on that Pennsylvania battlefield.
“It’s a fabulous story,” said Billington, “but it’s a story about dead people.”
Yelena Samofalova is a Senior Reporter for Youth Journalism International.