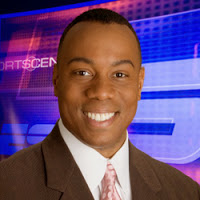 “From today on, shine, just shine,” said Harris, who anchors the 6 p.m. edition of SportsCenter.
Harris, a keynote speaker at last week’s conference, talked about his journey in journalism, beginning in 1982, when he was in eighth grade.

“When I embarked on journalism, I had no idea where it would take me,” said Harris.
After graduating from Virginia’s Old Dominion University with a bachelor’s degree in speech communication, Harris applied for many jobs, but the wheel of fortune wasn’t in his favor.
Instead of becoming discouraged, he attended graduate school to polish his academic record.
“Don’t ever give up,” he told the aspiring young journalists.
Harris went to work for free as a news reporter at a radio station. Though unpaid, he had freedom to do things he wanted. He wrote his own show, learned from his mistakes and got valuable experience.
He worked in radio in Pennsylvania and Virginia before going to work for ESPN in 2003.
Even now, he keeps trying to be better.
“It is called the practice of journalism, because we may never get it right,” said Harris. “We might get pretty good.”
Journalism boosted Harris’ confidence and gave him a platform to see different kinds of people every day and figure out who he is.
The best career choice he made, Harris said, was to join ESPN in 2003. He loves sports, particularly basketball, but Harris said there is actually no difference between writing about news and writing about sports.
It’s all about journalism, he said, interviewing, writing, and telling a story.
“Don’t you ever go out to a story, and not come back with a story,” he told the students.
Harris stressed the importance of persistence in journalism. If you learn the basics, do it well and send it to someone, they will notice it, he said.
Be tenacious, Harris said, and be patient. He advised students not to be afraid of trying something different.
As young journalists learn and grow, Harris said, they should not forget the people who helped shape and support them.
Keep up the enthusiasm, Harris told students, and have fun.
Van Nguyen is a Reporter from Vietnam for Youth Journalism International.
***
Your tax-deductible contribution can help support this nonprofit at
www.HelpYJI.org