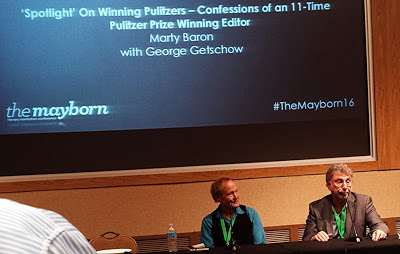 At The Mayborn Literary Nonfiction Conference in Grapevine, Texas, conference co-founder George Getschow, left, talks Pulitzer Prizes with Marty Baron, who led The Boston Globe during the paper’s investigation into the child sex abuse scandal inside the Catholic church. Those stories, which won the paper the Pulitzer Prize for Public Service in 2003, led to the acclaimed 2015 movie Spotlight.  (YJI)

GRAPEVINE, Texas, U.S.A. – A great reporter isn’t someone who knows everything, but someone filled with determination and meticulous attention to detail, said 11-time Pulitzer Prize winner Marty Baron.

Baron, now the editor of The Washington Post, is featured in the 2015 film Spotlight about The Boston Globe’s investigation into the Catholic church cover up of
child molestation by priests.
Baron was editor of the Globe during the Spotlight team’s Pulitzer Prize-winning series about the child sex abuse scandal. He spoke about the experience to an
audience of journalists in July at the Mayborn Literary Nonfiction Conference outside of Dallas.
The sex abuse scandal erupted in 2002, after the Spotlight team team – the paper’s group of investigative reporters – discovered discovered that there had been rampant sexual abuse of teenage boys in Boston by priests.
As the Spotlight investigation continued, the team of reporters noticed a steadily growing pattern of priests being relocated after cases of abuse – a pattern that expanded beyond Boston into other U.S. cities.
“We were able to document that the serial sexual abuse was known by the top tier of the Archdiocese,” Baron said.
But to release such a story would make an enemy of the Catholic church and could mean facing backlash from Boston’s many devout Catholics.
“The risk to us and the risk to the institution was tremendous,” Baron said. To prepare his team for uncovering the scandal, Baron emphasized the need to make sure all of the stories were well documented.

“I didn’t want the church to seize any of the story to discredit it,” he said. 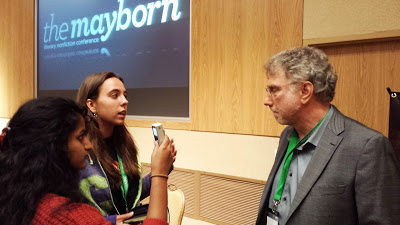 Some of the hardest challenges in doing the story, Baron said, were “issues of securing documents” as well as “identifying the patterns within the church.”
Reporters spent many long hours researching records documenting priest reassignments to other parishes and the reasons given to excuse these movements.
Despite these challenges, Baron says that he has no regrets about doing the story. It’s the job of journalists to expose such injustices, according to Baron.
“Every time I do these kind of pieces, I get emails thanking us for what we do,” said Baron.
Not long after the publication of the first piece, other victims began calling in to the Globe to share their own stories of abuse.
Before the piece was published, Baron visited Cardinal Bernard Law, the presiding church official in the region.
Reporters sought a response to the allegations from church officials, but the church representative refused to comment.
“We gave every opportunity to the church to tell their story,” Baron said, but they didn’t even “want to hear our questions.”
Baron was surprised by the overwhelmingly positive reaction to the stories from the Spotlight team, saying that people wanted to share in the tragedy.
“They didn’t feel betrayed by The Boston Globe, they felt betrayed by the Archdiocese and the Cardinal, which they should have,” Baron said.
The scandal created a mess for the Catholic church that it found difficult to sort out. Besides winning a Pulitzer for the work, Baron said that the investigation itself was very rewarding.
“This work is our soul,” said Baron. “It’s the core of who we are. We will lose people if we don’t do this kind of work.”
Garret Reich and Mugdha Gurram are Reporters for Youth Journalism International.