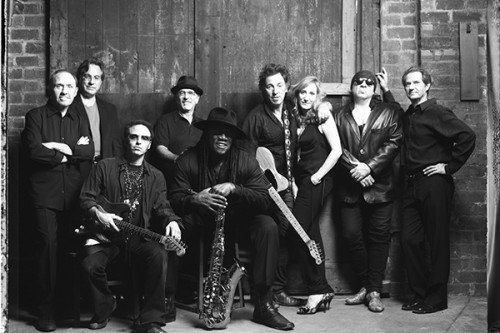 HARTFORD, Conn. – Bruce Springsteen and the E Street Band are back. After four years apart, the band had one goal in mind: to rock the stage in Hartford.
The band’s Oct. 2 performance at the Hartford Civic Center premiered their new hit album, Magic, and opened their new tour.
Bruce is back and better than ever. Before the show, the impatient fans chanted, “Bruuuuuuce!” 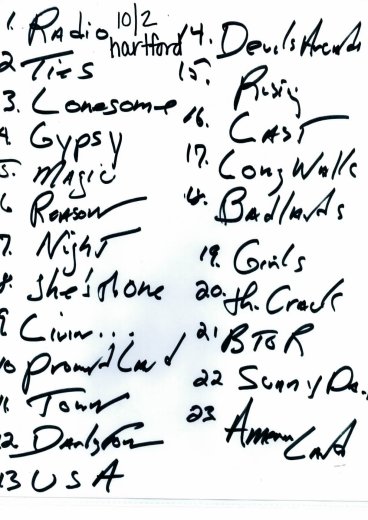 Once the lights came down, the band charged into “Radio Nowhere,” the first single off Magic.
Then for fans, instinct took over and the crowd roared with excitement at the thrilling opener.
I could tell that Bruce and the band were having a blast on stage and were glad to be together. They were all smiling and they seemed to like the crowd’s enthusiasm.
Besides, they had great new songs to play.
When Bruce said he was “so glad to be in your beautiful city,” that was pretty cool. I cheered at that.
Bruce was really pumped. I could just sense it. He was all sweaty and really working hard to impress the fans. He skipped down the runway in front of the stage and strode to the back walkway so the people in those seats could see him.
At one point, Bruce kneeled to the ground near the edge of the stage and let the fans play his guitar. They went crazy.
Throughout the concert, I liked the intensity of the crowd and the excitement of being there. It’s hard to put into words. It was amazing.
Hearing “The Rising” live was absolutely spectacular. When I heard that song, I felt for the people who heard those words in 2002, still hurting from the Sept. 11 attacks.
The beautiful “Long Walk Home” was another highlight of the show.
My favorite song of the night, though, was the duet between Bruce and his wife, Patti Scialfa, who sang “Town Called Heartbreak,” a tune off her new album, Play It As It Lays.
They seemed like outlaw lovers. I liked the Southern sound they made. Their two voices matched and just sounded right. It was really cool.
But Bruce and Patti weren’t the only stars on stage. The whole band delivered great performances, but a few members deserve special mention.
Saxophonist Clarence Clemons, the Big Man of the band, was awesome, wailing on the sax with his signature sound. He definitely keeps the excitement going.
Guitarist Nils Lofgren generously steps back when others have a solo, but when it’s time for his glory, he comes out strong and gives it his all. Bruce calls Nils “the greatest guitarist in rock and roll” and I can see why.
Little Steven Van Zandt, who plays the crowd as well as he plays his guitar – he ate up the attention as he took cheers from the fans – often ended up sharing the microphone with Bruce.
Providing a powerful beat, Max Weinberg uses all his strength to hit the drums. Maybe that’s why I had trouble hearing the teachers in school the next day.
Bruce closed his encore, and the show, with “American Land” – a moving folk song that tells the story of immigration and love for this country.
The song was so fun to listen and dance to that I even started doing a little Irish jig.
The concert was a spectacular performance that had fans singing, dancing and screaming all night long.
This is not just a show for adults. It’s good for young people, too. Kids will have a blast even if they don’t know any of the songs and will learn about politics from the music.
Get some Magic into your life.
If you can get to a show on this tour, do it. If you can’t, at least get a copy of Magic and see what tricks this phenomenal band has up its sleeve.

Luke Pearson is a Reporter for Youth Journalism International.