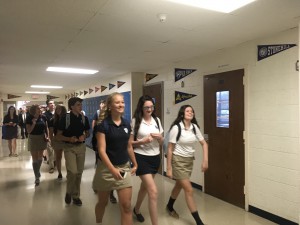 BRISTOL, Connecticut, U.S.A. — St. Paul Catholic High School is locking its doors.
A new school security plan at St. Paul has all the entrances, except for the front door, locked after 7:45 a.m.
Next year there will be a buzzer system and video monitor at the front door, said Joseph Bischof, the school’s development director and incoming principal.
Joseph Bound, the interim principal, said although a school crisis plan has been in the works for a month, the Colorado shootings prompted the new locking policy.
The Bristol Police Department sent out information on how to make hallways safer, Bound said.
Teachers at St. Paul must now keep their classroom doors locked at all times.
Junior Erin Carvey said “It’s a good idea as long as it doesn’t get out of control.”
But some students think it’s already out of control.
“It’s mass panic and it will die down soon,” said senior Heather McCarron. ” I just don’t like being locked up like an animal.”
Another senior, who spoke on the condition that his name not be used, said he had been asked to leave the school until he received a note from a psychologist saying that he was mentally fit to return to St. Paul.
The boy wears a trench coat to school and last year wrote a macabre poem in English class.
“I think they’re just covering themselves,” he said. “If they were really afraid they could expel me.”
The administration declined comment on the student’s statement.
Junior Jess Mendes said, “It doesn’t make me feel any safer, but then I never felt threatened.”
Richard Cahill, the dean of discipline, said, “A lot of people think it couldn’t happen here, but I’ll bet the people in Colorado said the same thing.”