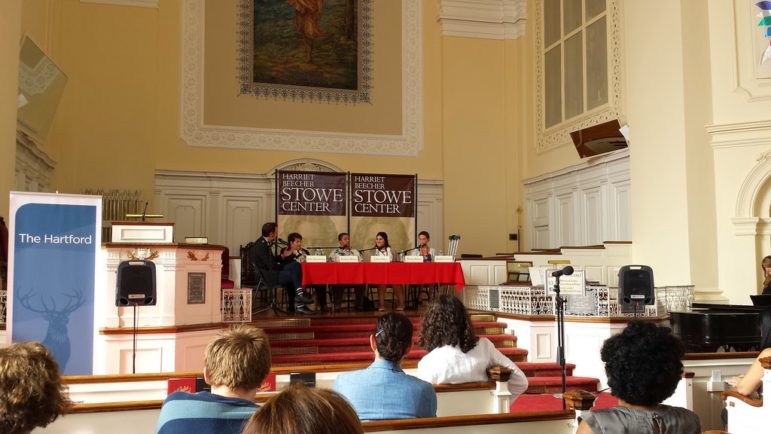 HARTFORD, Connecticut, U.S.A. – How often have we ever looked around our own society and acknowledged how much change needs to take place? For a lot of people, the answer is probably often. But how often do we actually take steps towards that change? The answer for many is, unfortunately, nowhere near as often as we should.
It’s important to encourage the practice of inspiring change in the generations that will be taking the reins, so the Student Stowe Prize, established by the Harriet Beecher Stowe Center in 2012,
recognizes published or presented writing that has made an impact on critical social justice issues in modern society.

The winning writers told their stories as part of a panel discussion at the Inspiration to Action: Stories of Real Social Change program earlier this month.
This year, awards went to Madeline Sachs from the University of Chicago Laboratory High School in Chicago for her speech, Juvenile Life Without Parole, and to Donya Nasser, a student at St. John’s University in New York City for her essay, Women in Leadership Today and Tomorrow.
Other panelists were JoAnn Price, co-founder and managing partner of Fairview Capital Partners and Patricia Russo, executive director of the Women’s Campaign School at Yale University. John Dankosky, news director of WNPR and host of the radio program, “Where We Live” served as moderator.
Sachs outlined juvenile justice issues in America and told how she became involved with them. For her, interest in the death penalty began in the eighth grade, when her class studied the Constitution.
It was “really strange” for her, Sachs said, because “most 13-year olds aren’t interested in the death penalty.”
Sachs started to learn more about people like Jacqueline Montanez, who was sentenced to life imprisonment at the mere age of 15 for participating in the murder of rival gang members. Factors such as age and home life were not considered in her sentence. Sachs considers this an injustice, that a child who is susceptible to bad home influences is tried as an adult, without a chance to prove that they can change.
She addressed the Miller versus Alabama Supreme Court decision, which overturned mandatory life without parole for juveniles. While this may seem like the end of the problem, Sachs informed the audience that many judges are finding ways around it, using loopholes so that juveniles still end up behind bars for the rest of their lives.
Sachs said it struck her how behind the U.S. was in a matter as critical as this. When asked why she thought that was, she replied that Americans do not make efforts to eradicate issues like this where they are lagging behind because “we see ourselves as the forefront of civil rights.”
Without a law degree, she said, it’s hard to make a big impact. Still, that hasn’t stopped her.
Sachs took matters into her own hands, giving a speech at her synagogue, leading workshops, teaching classes, starting a club at her school and bringing in guest speakers to help educate her classmates. She’s already seeing the difference, when classmates come up to her, interested in how they can help.
There’s still a long ways to go, though, according to Sachs.
“It’s hard to get to the root of the problem, which is the court system itself,” Sachs said.
Nasser discussed the issues women face when trying to get involved in politics and how she was inspired to get involved.
It began in high school government class, where she made a bill about the correct temperature to cook ground beef. She never expected to get recognition for a bill on a topic as seemingly ridiculous as that, but she did.
That’s when she realized, she said, that if she “was really passionate about a subject, [she] could speak about it.”
Much of Nasser’s inspiration comes from her mother, who at a young age faced a forced, arranged marriage to a stranger, who planned to make her move from Tehran, Iran to the United States.
If her mom had more advocates for her in her government, Nasser said, her situation would have been different.
Nasser emphasized the importance of having women in government positions to represent the nation’s diversity. She said it’s important to learn from the example of other countries, because although Americans may criticize them for their high rates of poverty, many of them have more women in parliament.
Nasser also brought up the importance of civil engagement in politics, calling it the “hallmark of our nation.”
Many issues, she said, including the lack of women in politics, could be solved by the combination of political power and civilian grassroots organization.
“When you bring these two together, that’s when you can make a difference,” she said.
The reason this doesn’t take place more often is because civilians don’t want to get caught up in political corruption and politicians don’t want to get down on their hands and knees with people of
lesser status, according to Nasser.
But Nasser said of politicians, “You’re not serving to serve yourself, you’re serving to serve those who voted you in.”
Nasser addressed the importance of voting. In other countries, she said, people are more likely to cast a ballot “because they realize how valuable” voting is.
She stressed the importance of voting in proper representation in government, starting with the inclusion of more women.
This year’s Student Stowe Prize winners showed that change is a process started first by acknowledgement, and then by action.
Mughda Gurram is a Junior Reporter for Youth Journalism International. 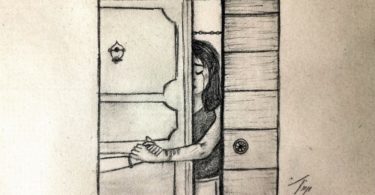 It's been a year since YJI's glorious concert celebrating the Bill of Rights. The pandemic makes choral singing unsafe right now, so let's enjoy memories of a wonderful day. Read YJI co-founder Steve Collins' stirring words of reflection, see some photos, read the program - and watch the video of the music being performed if you really want to be inspired. ❤️ There is also a video of our special guest, Senator Angus S. King, Jr., explaining what the Constitution really does. Not to be missed. www.youthjournalism.org/one-year-ago-when-yji-brought-the-bill-of-rights-to-maine/ ...