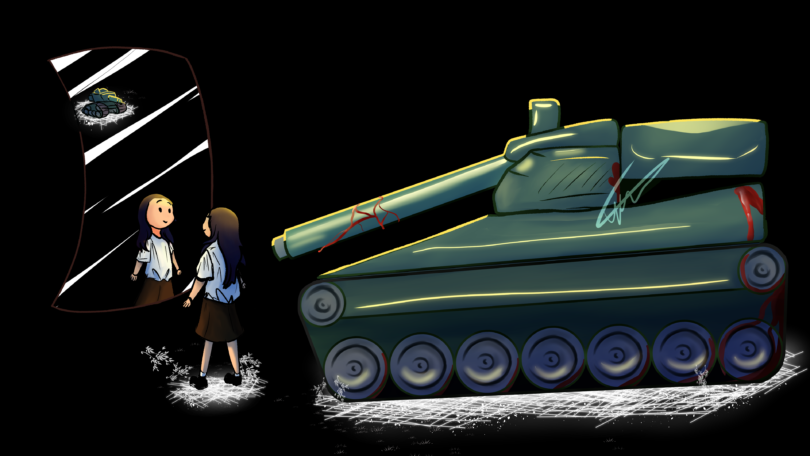 Of course, I have sympathized with Ukranians since day one. But the war felt distant, and life just went on as usual in Hong Kong — stressing out about school, hanging out with friends, eating, sleeping, et cetera — until I saw the news of Taiwan potentially being the next Ukraine.

It was only a month or two ago when I ridiculed my Australian friend who is determined to serve in the military after he graduated. Despite the firmness in his tone, I just couldn’t take him seriously. Growing up, war has been a distant thing that could not possibly happen in the ‘civilized’ world. It’s simply incomprehensible for my brain.

To me, war was like an ancient relic, an event in the history textbook, a thing generations before the ‘boomers’ talk of.

So naturally, I could not personally relate when the news of Putin’s invasion of Ukraine came.

People don’t care, not until their interests are harmed. I am not to judge on a moral high ground, because I myself was equally as guilty. “A war started in Ukraine? That’s awful! But oh well, not in my backyard” was one of my despicable-yet-honest thoughts at first.

But soon after, I realized that a war that started across the planet had arrived at my doorstep. The reality of war hit.

Seeing the fear that is spreading in Hong Kong’s friendly neighbor, Taiwan, I began to see the reality of the war in Ukraine. All of a sudden, the war happening more than 7000km from my home no longer seemed so distant.

As the international discourse surrounding Taiwan being the next Ukraine gained traction, catchphrases like “Today Ukraine, Tomorrow Taiwan” emerged among citizens. These phrases imply that what is currently happening in Ukraine could happen to Taiwan, both of them being democracies under threat by their neighboring bullies, Russia and China.

Apart from the dispute on the political status of Taiwan — whether it is a separate sovereign state, or part of China, the bigger issue has always been Taiwan’s fear of a Chinese invasion.

Seeing it as part of the country, China has long wanted to reclaim Taiwan and ‘unify’ China. Frankly, parallels are drawn to how Putin invaded Ukraine, in the hope of “restoring Soviet glory.”

Facing the increasing threat of a Chinese invasion, Taiwan President Tsai Ing-Wen ordered the island’s security personnel to step up surveillance and military defense, according to a story published by the German news outlet DW.

According to U.S. News and World Report, a Taiwanese government spokesman called it “inadvisable” to compare the two situations. He said people should not draw conclusions after an annual review of Taiwan’s  air raid shelters.

I am aware that China is not Russia and Taiwan is not Ukraine.

I am no expert in the Russo-Ukrainian war nor the Cross-Strait relations, so I cannot possibly comment on whether the parallel drawn is accurate or not.

But as a 17 year-old in Hong Kong, I live in the reality of our interconnected, 21st century world. In a globalized world, we do not live in separate units.

Nations, wars and ideologies are all part of an interdependent network. As allies of democracy, we must stand by each other in absolute solidarity.

Joanne Yau is a Junior Reporter with Youth Journalism International from Hong Kong. She wrote this commentary.

İpek Eser is a Junior Reporter and Illustrator with Youth Journalism International from Turkey. She made the illustration.

Joanne Yau is a Junior Reporter with Youth Journalism International from Hong Kong.