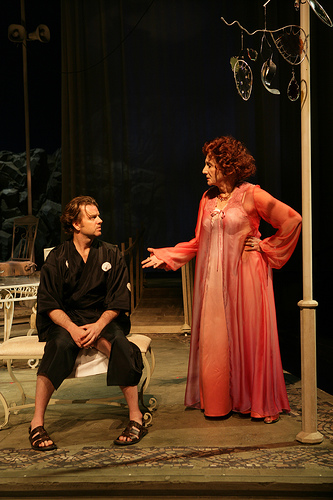 HARTFORD, Conn. – They say a person’s life flashes before their eyes before they die. In the play “The Milk Train Doesn’t Stop Here Anymore,” now playing at Hartford Stage, this seems to happen in the form of a recited memoir.
The play stars Olympia Dukakis as the wealthy Flora Goforth, an elderly woman living in an Italian villa by the sea. Dukakis has been in dozens of Broadway productions and movies such as “Steel Magnolias” with Julia Roberts.
Mrs. Goforth, diagnosed with a terminal illness, is coming upon the end of her life yet denies it due to an obvious fear of death. She continues to pester her hired help, including Blackie, the woman hired to constantly record her dictated memoirs, to the point of exhaustion.
It’s obvious that something has got to give or Blackie, played by Maggie Lacey, will quit and leave Mrs. Goforth to write her own memoirs.
But suddenly, a mysterious middle-aged poet comes to call on Mrs. Goforth. She allows him to stay on her property because he reminds her of her late husband Alex, who was also a writer.
The poet, Chris Flanders, played by Kevin Anderson, is known by local women as the “Angel of Death” because old women seem to die when he is visiting. Mrs. Goforth, suddenly faced with her own mortality, is terrified, yet intrigued by the poet and the cause of his nickname. He insists he just wants to help her around the house. But the audience eventually finds out the mysterious poet is willing to help her in more ways than one.
As a seasoned hand in Tennessee Williams’ plays, Olympia Dukakis is superb in capturing the multi-faceted Mrs. Goforth. She easily convinces the audience that she makes the world around her into what she wants it to be, and yet is able to capture the underlying fear of the slowly dying woman.
The other two primary actors, Lacey (Blackie) and Anderson (Chris Flanders), are also great representatives of their characters and the parts they play in Mrs. Goforth’s last days.
Also remarkable is the play’s set design. The stage looked as if it could have been part of an Italian villa. Scattered onstage were a few large rocks and small tables complete with delicate place settings, including a silver cigarette canister. Behind curtains was Mrs. Goforth’s bed, where pivotal scenes of the play took place.
Despite the play’s melancholy theme, it was a profound look at denial and the inevitability of death.
The play is the 10th and final installment of the Tennessee Williams Marathon, which was “a decade-long exploration of this great artist’s work,” according to Michael Wilson, artistic director of Hartford Stage.
The show runs almost every night until June 15.

Rachel Glogowski is a Senior Reporter for Youth Journalism International.