PARKERSBURG, Iowa, U.S.A. — Memorial Day weekend started off as a normal one for residents of Parkersburg, Iowa. High school seniors had already graduated, and some were planning parties for the long weekend. Underclassmen were halfway through final exams and looking forward to summer vacations.
No one expected that late Sunday afternoon, May 25, a terrible tornado would rip through their tiny town, leaving death and rubble in its wake. 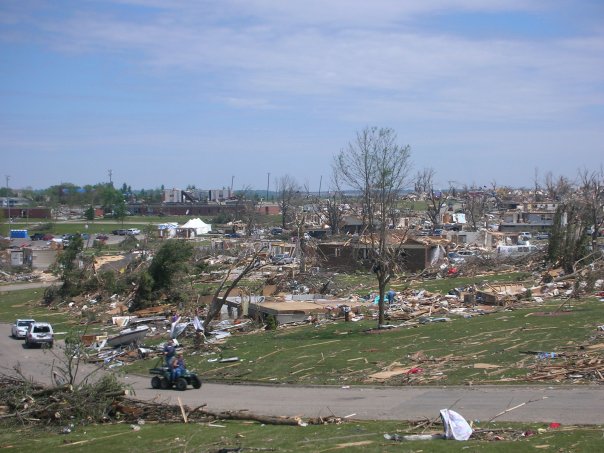 Nearly three-quarters of a mile wide, the deadly EF5 twister – the most severe tornado as classified by the National Weather Service – destroyed the town’s high school and as many as 200 homes in Parkersburg with winds as high as 205 miles per hour.
The tornado “sounds like a freight train is running over your house,” said
16-year-old Krista Kannegieter, who huddled with her parents in the basement of their home while the storm raged overhead.
Kannegieter and her family survived the Parkersburg tornado, but it left them homeless.
It also wiped out Aplington-Parkersburg High School, where Kannegieter was finishing her junior year.
She first heard about the approaching tornado on the news, Kannegieter said, and was horrified to learn that it was headed straight for her hometown of Parkersburg.
As the storm struck, chaos ensued.
The power went out, warning sirens wailed all over town, and the tornado barreled closer.
“It looked like a big black wall,” said Kannegieter. “Stuff was flying everywhere.” 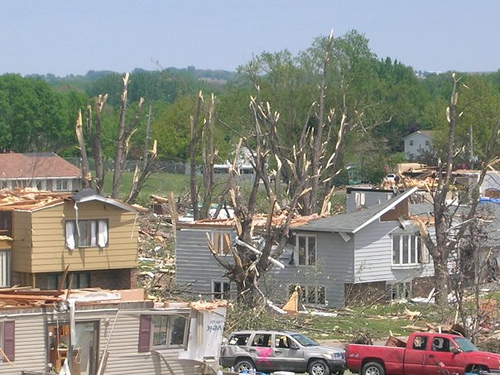 Kannegieter and her parents made it safely to their basement before the twister hit their house.
Unfortunately, their neighbors weren’t as lucky, because the house “crumbled right on top of them,” Kannegieter said. “We had to pull stuff away to get them out.”
Emerging from the shelter of her basement, Kannegieter saw flattened homes, downed trees and power lines and her family’s vehicles “thrashed.”
Seeing the wreckage reminded her of a movie, according to Kannegieter. It didn’t seem real.
“I couldn’t even believe it was Parkersburg.”
The deadly tornado killed five people in Parkersburg, a town of less than 2,000, and two more in nearby New Hartford, a town with less than half of Parkersburg’s population. All of the dead except one victim were at least 70 years old, and unable to get to safety in time. Many others were hurt.
Though the deaths of five people in a town as small as Parkersburg is staggering, Kannegieter is amazed there wasn’t more loss of life.
“If you walk around town, you’re like, how can only five people be dead?” she said.
The tornado drastically changed the view from Kannegieter’s home near the high school, where many of the surrounding houses were destroyed.
Normally, Kannegieter, who lives two blocks from the school, cannot see the high school from her yard because there are too many houses in the way, but now there is nothing blocking her view.
The high school will be rebuilt, but not in time for Kannegieter’s senior year, which begins in the fall.
There were still tests left to take when the tornado raged through town, but Kannegieter said it looks like school is over for this year. Students will just keep the grades they had going into finals, she said.
“If I had to take a test now, I wouldn’t be able to concentrate,” said Kannegieter.
During the new high school construction – which will be in Aplington, about five miles away, and not in Parkersburg, said Kannegieter – she and her fellow students will go to classes in another building, not the high school they’ve come to love.
As if switching school buildings during her senior year wasn’t heartbreaking enough, Kannegieter and her family will not be able to live in their house for about another 18 months. Though her bedroom was relatively untouched by the storm, half the roof on the house is gone and much needs to be done before the family can return.
Rebuilding houses in Parkersburg could take up to two years, Kannegieter said. Some people whose houses were hit are living with family members on the other side of town, said Kannegieter, and others are living in campers.
In the first few days after the storm, Kannegieter and her family stayed in a hotel in Cedar Falls, a neighboring Iowa city. She said they’re looking into renting a house in Parkersburg and also would probably stay at her older sister’s house for awhile.
Kannegieter’s dad is a farmer, she said, with fields “all over” the area. She said his crops weren’t too badly damaged and the soil is fine, but there is some debris in the fields and some machinery was ruined.

She and her parents are fortunate, Kannegieter said. About three years ago, she said, they put an addition on their house. New siding offered extra protection, she said, and may have saved them a lot of damage.
Although the roof and her mother’s beautiful gardens were destroyed by the winds, many of Kannegieter’s pictures, clothes, and art projects were salvageable.
Her brother and sister-in-law, who also live in Parkersburg and were home with their little daughter during the storm, were not as fortunate. They survived, but their house is “totally gone,” she said. “They don’t have any pictures of their baby, who is five months old, or their wedding.”
An older sister was at her home in Parkersburg with her husband and two children throughout the ordeal as well. They, too, survived, but lost their home completely, Kannegieter said.
Another sister was home with her husband in Parkersburg, Kannegieter said. Luckily, though the storm left debris in their yard, their house escaped damage.
The weather was nice the day after the tornado, Kannegieter said, which made it easier to rescue their belongings. But then rain poured down, soaking the debris that hadn’t been cleared up and turning everything muddy, making the job worse.
The summer ahead is bound to be a rough one. Clean up efforts have made noticeable progress so far, but rebuilding has barely begun.
A local insurance company is planning a carnival for the younger kids, Kannegieter said, who mostly want to know that their friends are okay. Adults, she said, are more worried about the financial strain as insurance companies assess the damage.
Parkersburg children are eager to lend a hand with the clean up, she said, and teens will be working all summer to help their families rebuild.
No one has really relaxed since the storm, Kannegieter said, but she said life in Parkersburg “will be back to normal, but it will take awhile.”

Beth Pond is a Reporter for Youth Journalism International. The photos were taken for YJI by Krista Kannegieter.