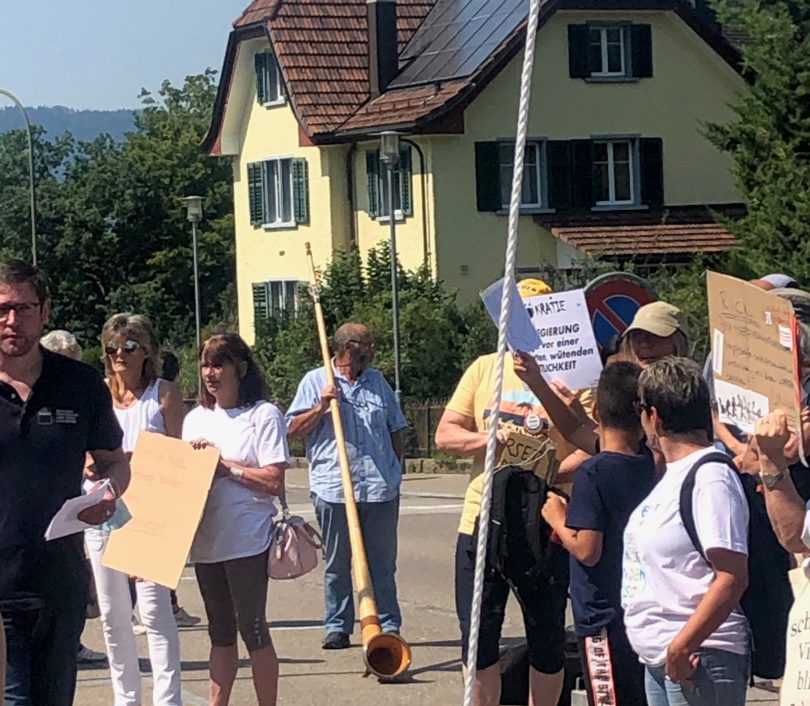 Anti-vaxxers were there, too.

Zürich authorities decided to implement vaccination busses in order to administer more covid-19 vaccines. This new concept was inaugurated in Gossau, a town on the outskirts of Zürich.

Rickli, who is head of the Department of Health in the Canton of Zürich, gave a short speech praising the vaccination efforts in Zürich up until now, but urging more people to get vaccinated.

During the August 22 event, health professionals were already working in the new busses and vaccinating people.

But not everyone was there to get immunized from the deadly coronavirus pandemic.

A group of anti-vaxers stood in the back of the crowd – most of them behind the cameras – making loud comments and noises during Rickli’s speech.

Angry and sometimes vulgar messages had been written on the ground around the site such as “Hands off our children,” or “FCK BAG” (BAG is the Feder Office of Health).

Protesters held signs claiming that the covid-19 vaccine kills people, or demanding an end to the coercion to get the vaccine.

“Lies!” the group shouted as Rickli addressed the effect of long-covid. When she stated that 50% of Zürichs population was not vaccinated, some of them added, “Luckily.”

After she spoke, Rickli and other authorities took pictures together while the people in the back shouted, “Masks!” and “Social Distance!”

The event went on as more people stood in the line to get vaccinated and were offered free food. Meanwhile, the group of protesters remained. One of the protesters played an Alphorn, a Swiss instrument, typically played in the Alps.

According to the Swiss newspaper NZZ, an anonymous anti-vaxxer aggressively threw a liquid on Rickli shortly after her speech. As it turned out, it was only apple juice and nobody got injured.

Nevertheless, the anti-vaxxers, who had the right to protest, acted aggressively while others waited for vaccines.

Meanwhile, the worldwide pandemic raged on.