BRISTOL, Connecticut, U.S.A. — Volunteers broke out their rakes and paintbrushes Saturday as part of an effort to fix up a house for homeless youth.
Some renovations included clearing overgrown grass, painting porch rails, raking out areas, and disposing of yard waste.
Over half a dozen church groups were present at the house to clean up its exterior and backyard. It’s one small step towards restoring the house, which will be used as a shelter for homeless teens.
“I think it’s good. I’m having fun,” said Amanda Souza, a 15-year-old that attends Bristol Eastern High School. 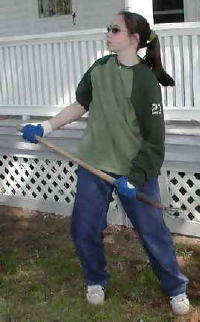 “I take pride in my community,” said John Fortunato, the project coordinator. He was impressed with the number of teens that showed up. “You guys are the future. It’s about giving back.”
“Being a senior citizen, we need future taxpayers,” he joked.
Two sisters, Jessica and Katelin Cummings, who attend East Hartford High School, were also present at the house, helping with various jobs like pulling weeds.
They think the shelter is a great way to get homeless teens off the streets.
They thought that the house being located away from the center of town was a good idea, because it’s away from all the trouble.
Alex Ayala, 14, a student at Bristol Eastern High School, said he learned about the Good Shepherd House through his church.
Ayala said the project will help a lot of people. If he was in need, Ayala said, he would go there.
Katherine Feltt, a student at Bristol Central High School cleaned out underbrush near one of two barns on the property. She said she decided to help out because it seemed fun.
“It was so close to my neighborhood,” said Feltt. “I always wanted to do it.”
However, some neighbors in the area aren’t as keen about the homeless shelter, which is across the street from Chippanee Golf Club.
“They’re not too happy with it,” said Paul Contrastano of Bristol. “But if the place is maintained and supervised, they won’t have a problem.”
The 1805 house at 733 Hill St. has a dozen rooms and three bathrooms and sits on 23 acres.