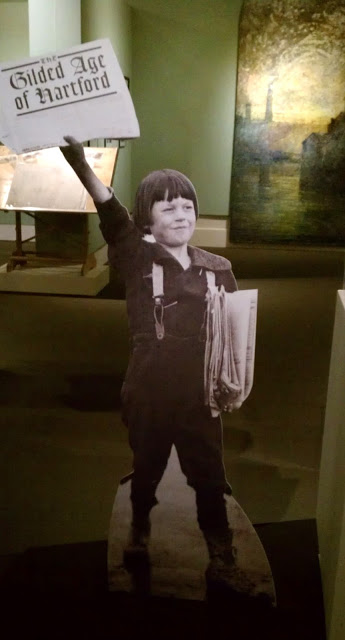 A newsboy hawking papers greets visitors to “The Guilded Age of Hartford” exhibit at the Mark Twain House and Museum. (Yelena Samofalova/YJI)

HARTFORD – I’m not a history buff by any stretch of the imagination. I find that listening to tales of the past just leaves me wanting to get up and go do something more interactive, like finish that novel I’ve been writing or mocking a B-movie on television, or basically anything that doesn’t leave me sitting by myself and feeling bored out of my skull.

As such, I was rather skeptical about attending a lecture by Pulitzer-Prize-winning author Debby Applegate, detailing the life of abolitionist Henry Ward Beecher. If you don’t know who Henry Ward Beecher is, you’re not the only one. 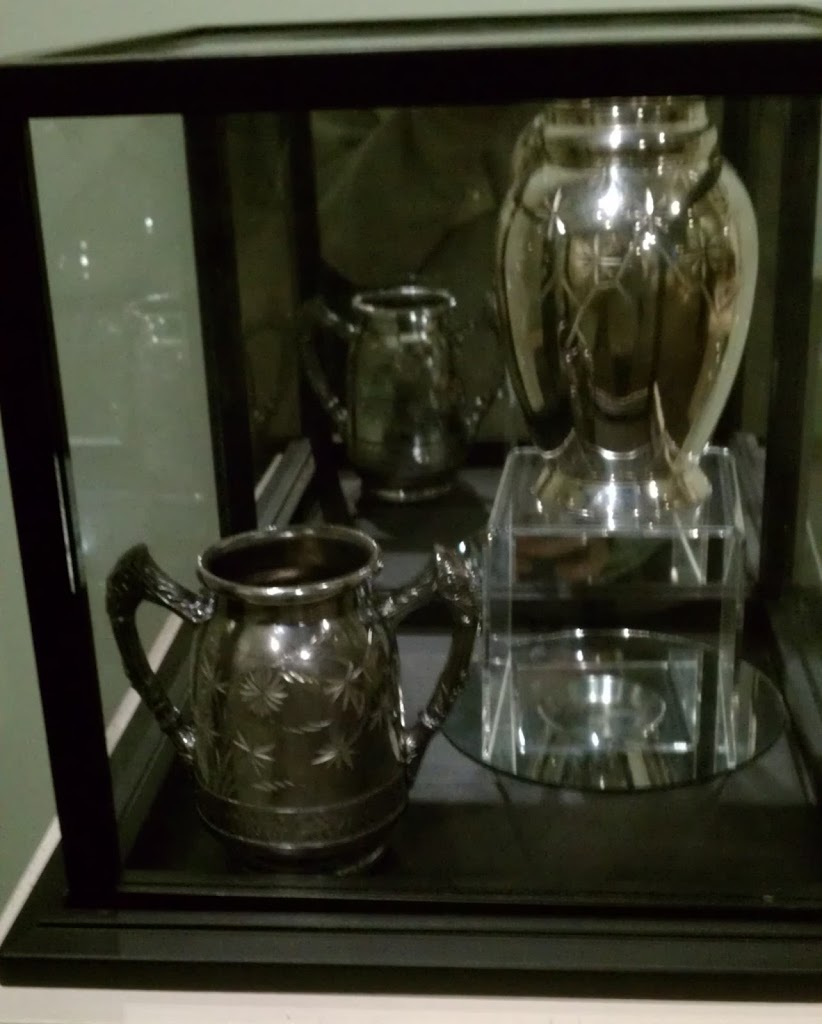 A display in “The Guilded Age of Hartford” exhibit at the Mark Twain House and Museum. (Yelena Samofalova/YJI)

Before the main event, I spent most of my time in the exhibition. There wasn’t much that captured my interest, other than
the fact that the exhibit was apparently still under construction, since one of the pedestals contains not a glass case with an ancient document underneath,
but a pile of worker’s tools and other miscellaneous equipment.
I could have spent time looking at the antique bicycle with the giant wheel in front, or the open copy of “The Gilded Age” that taunts the viewers with their own inability to read it, but instead I took time to inspect a roll of curly-mustache-print duct tape (which before then, I did not know existed.) 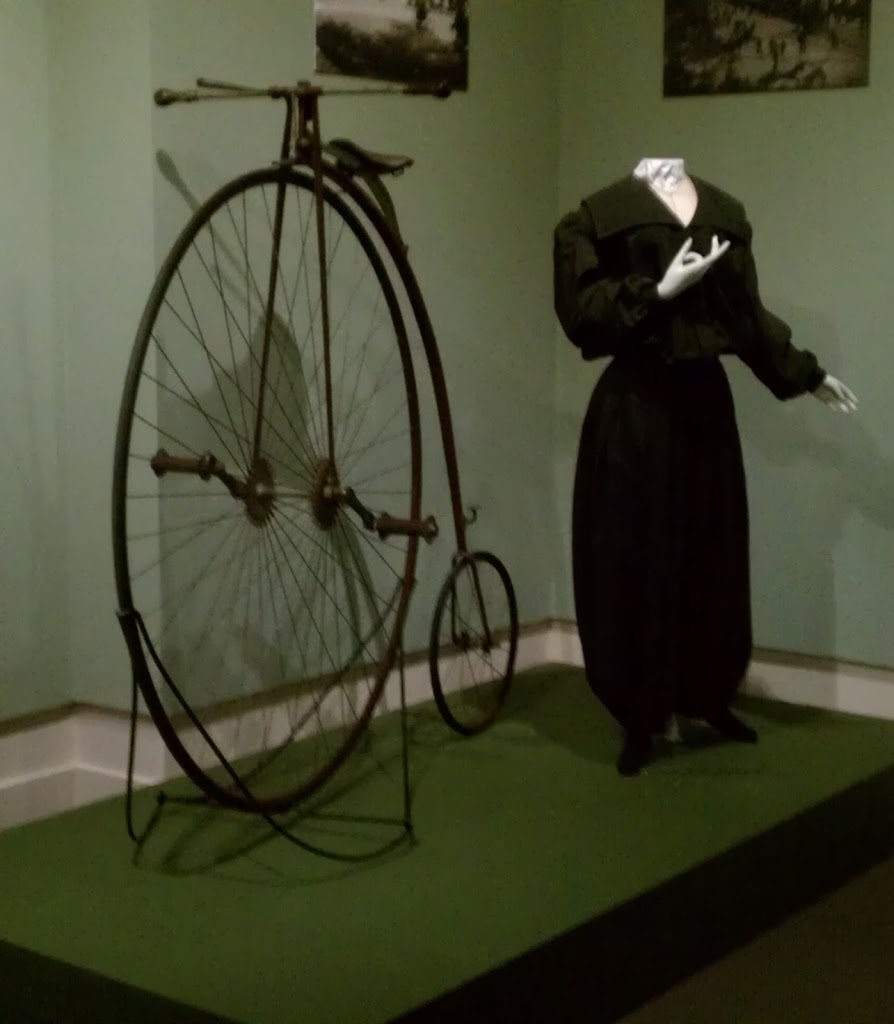 An antique bicycle is on display in  “The Guilded Age of Hartford”  exhibit at the Mark Twain House  and Museum. (Yelena Samofalova/YJI)

After wandering around and accomplishing absolutely nothing, I took a seat in the auditorium. Before too long, Katherine Kane, director of the Harriet Beecher Stowe Center, which brought Applegate to speak, and Cindy Lovell, the new director of the Mark Twain House and Museum, each said a few introductory words.

Then came Applegate, author of The Most Famous Man in America, The Biography of Henry Ward Beecher. As soon as she got onstage, she apologized in advance for talking about the three “no’s” of conversation:  Sex, Religion and Politics.
As she began telling her tale, it quickly became apparent that Applegate was not a traditionalist when it came to giving lectures. I came into the hall expecting a long, drawn-out monotone ramble. What I got was a stand-up routine in lecture’s clothing about a man who became famous enough to become a “footnote of history,” as Applegate put it.
Applegate painted a vivid picture of the firebrand Beecher, detailing his rise to prominence by way of his amazing
public speaking skills as a preacher. After awhile, I began to notice that Applegate’s performance was strikingly similar to what she was describing, and it made me feel like I was there, listening to the late, great Beecher give one
of his rousing, yet controversial sermons.
This lecture was not played safe at all.
Applegate took every opportunity she could to say something that would have made a gentleman’s monocle pop off in shock. She took something I had little prior knowledge and enthusiasm about and turned it into one of the funniest and most enjoyable experiences I’ve ever had in a museum.
It’s not always completely fair to judge something by how it sounds. Something that sounds boring could, in fact, be one of the most interesting things you’ve ever heard about.
Alan Burkholder is a Junior Reporter for Youth Journalism International. YJI’s Yelena Samofalova took the photographs for this story. 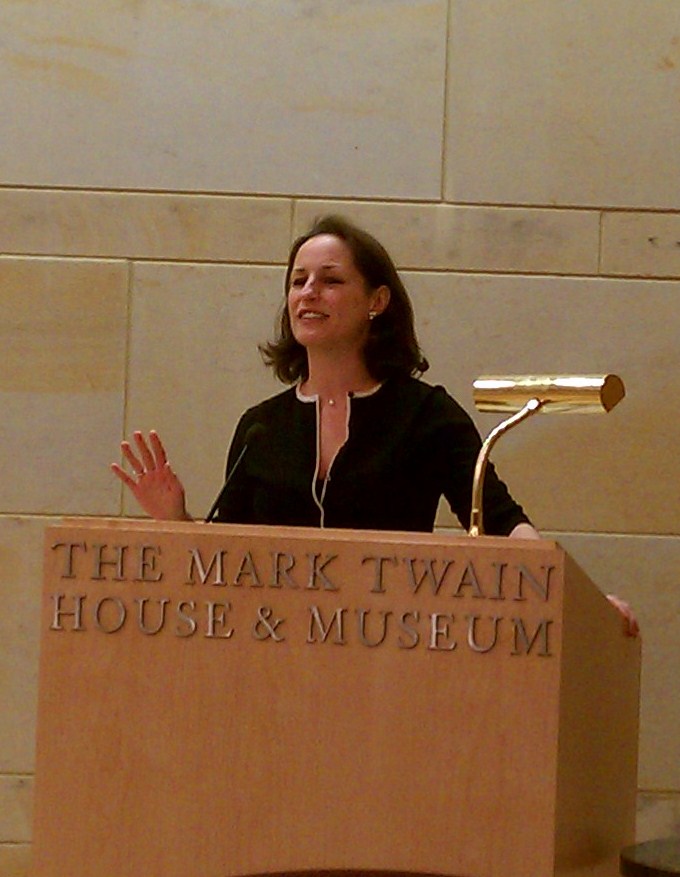 Biographer Debby Applegate speaking at the Mark Twain House and Museum last week about her latest book, The Most Famous Man in America, The Biography of Henry Ward Beecher. (Yelena Samofalova/YJI)