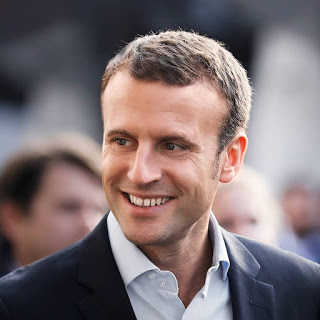 Emmanuel Macron, the newly elected French president
BRISTOL, Connecticut, U.S.A. – Emmanuel Macron mounted the stage outside the Louvre Sunday night to proclaim his victory over conservative Marine Le Pen in France’s presidential
election. As ecstatic tricolor waving crowds chanted, ‘Macron Président!’ and the man himself delivered an Obama-esque speech of hope and unity, Europe heaved a sigh of relief.
At 39, Macron becomes the youngest president in French history, but his age is not the only thing that makes his victory noteworthy.
The story of the genius boy who married his teacher, became an investment banker, before emerging from political obscurity to found the game-changing grassroots movement that would carry him to the Elysée has been repeated so many times that it has become the stuff of legend.  Amidst all this, however, we must look not just at the man, but at the broader political trends he represents.
Fake news and leaks have their limits
With the ‘fake news’ phenomena never far from the lips of journalists or politicians, until last night, one might have thought that it would have had a considerable impact upon Macron’s chances. First, there was the video diffused by the pro-Le Pen Twitter user @KimJongUnique of Macron supposedly washing his hands after shaking hands with factory workers. Then there was #MacronGate, when Le Pen accused him of having off-shore bank accounts.
Thousands of Twitter users shared fabricated documents purportedly proving her claim.  Most recently, there was #MacronLeaks in which hackers released thousands of confidential documents and emails, interspersing these with fakes to confuse readers. In less than four hours, the hash tag – propagated by the American ‘Alt-Right’ and prominent Le Pen supporters – had been used more than 47,000 times.
Yet for all these scandals, Macron emerged relatively unscathed and triumphant.   He, it seems, is France’s Teflon President.  Fake news, no matter how defamatory, simply does not stick to him.
Now, one could argue that this was all down to his personality.  Unlike Hillary Clinton, for whom the email scandal was a final nail in the coffin, he has undeniable charisma, which likely dissuaded many from believing the allegations.
We must not, however, ignore the agency of French voters. Anti-Macron sentiment was strong across the political spectrum.  This would, one would have thought, made it easy, for them to believe the stories.  And yet most chose not to.  Macron’s win may, therefore, indicate that the reign of fake news is weakening.  Voters, hyper aware of the concept since November, are becoming savvier about its signs and the intentions behind it.
Every (Western) election matters
There was once a time when it was only the U.S. presidential election that the world watched with bated breath.  But that was before Donald Trump stepped into the White House. On that day, the political consciousness of the West expanded. Other countries’ elections were not isolated domestic affairs to be dismissed, but crucial indicators of global political trends.
The first example of this was unusual attention accorded to the Netherland’s parliamentary elections in March. Incumbent Prime Minister Mark Rutte’s victory over far-right Geert Wilders was seen as a litmus test for European elections to come. Politicians and ordinary people alike now look to Europe to see if the countries of the Old World can stem the tide of right-wing populism.
Never has a French election attracted so much foreign attention, of which former U.S. President Barack Obama’s endorsement was the pinnacle. Suddenly, the name ‘Emmanuel Macron’ was on the lips of everyone anti-Trump, even if they had little prior knowledge of French politics. With Hillary Clinton out of the game, Western liberals invested Macron as their new champion. A brief glance at Twitter, and we see writers, celebrities, and actors from America and beyond celebrating his win.
Recently, we have seen how the extreme right has forged a community spanning from the U.S. across Europe to Russia through a bizarre combination of fake news, memes, and Kremlin support.
The international attention accorded to Macron demonstrates that this trend for trans-national political identification also applies to Liberalism. Globalization brings both greater inter-connectedness and greater division. Correspondingly, this new sense of trans-national political community, highlighted by Macron’s win, will strengthen ties within each political camp, while ultimately deepening the divide between them.

And Europe muddles on

Throughout the campaign, Macron unashamedly wore his pro-EU sentiments on his sleeve.  His decision to enter the Louvre to Ode to Joy, the anthem of the EU, confirmed his commitment to the union.
In a post-Brexit era when ‘euroscepticism’ is never far from the headlines, it seems remarkable that 66 percent of voters would elect a self-styled champion of Brussels. Even though many of these voters chose Macron as the lesser of two evils, the fact remains that their discontent with the EU was not strong enough to push them into the arms of Le Pen. It is possible, then, that the power of euroscepticism, just like the power of fake news, is on the wane.
Until now, German Chancellor Angela Merkel has borne most of the burden of keeping Europe together. Now, this responsibility will not only be shared, but zealously taken on by Macron.
In October, Germany will have its federal elections in which the main rivals are the incumbent Christian Democrat Merkel and the Socialist Democrat Martin Schultz. Either way, the country will have a staunch defender of pro-European at its prow.
With France and Germany united for the EU, it is unlikely to implode anytime soon. Macron’s victory may not be a wholesale endorsement of the European project, but it has certainly increased its chances of survival.

From outsider to insider: What comes next?

The greatest challenge the president-elect will face will be maintaining his political identity.  When the results became clear, Macron delivered the standard, mechanical speech expected of a political victor. He addressed a “republican salute to […] Madame Le Pen,” stated his respect for the “anger, the anxiety, the doubt” of her supporters, and promised to be a president for all, not just those who had voted for him.
Throughout the subdued six-minute speech he looked ill at ease, bored, as if he were reading somebody else’s script.
Fast forward an hour to his speech outside the Louvre, however, and he was once again the messianic figure from the campaign trail.
Face shining with jubilation, he did what he does best: seduce the crowd.  “You have won, France has won,” he declared. “I will protect you […] I will fight for you.”
In that moment, he sounded not like a politician, but like a rock star thanking his fans.
The transition from Macron the rock star to Macron the president will not be an easy one, as his awkwardness in the first speech portends. Macron fought his campaign by presenting himself as a man of the people, not the establishment.  However, as I wrote in my last article, Macron’s party En Marche! is unlikely to win a majority in June’s legislative elections. Forced into compromise and coalition, he risks losing this personal connection with the people, becoming absorbed into the establishment he fought to overturn.

France’s young president now faces daunting challenges: Establishing a majority for En Marche! during June’s legislative elections, strengthening and reforming the EU, and combating the terrorist threat, to name just a few.  With the U.S. under Trump’s thumb, the UK tangled in Brexit negotiations and Germany busy preparing for October’s federal elections, the responsibility for leading the ‘Free World’ and saving Europe has fallen in Macron’s lap.
Like many presidents, Macron will enjoy a post-election honeymoon, but the weight of expectation will ensure this is short-lived.  In the words of EU politician Guy Verhofstadt of Belgium: “Everyone is looking to France now, waiting for Emmanuel Macron to take the lead.”
Emily Couch is an Associate Editor for Youth Journalism International.
***
Want to know what’s truly on a global march?
YJI is a winner by any measure, because of the support
generously given by readers like you.
Your tax-deductible contribution makes a difference. Thank you.
HelpYJI.org