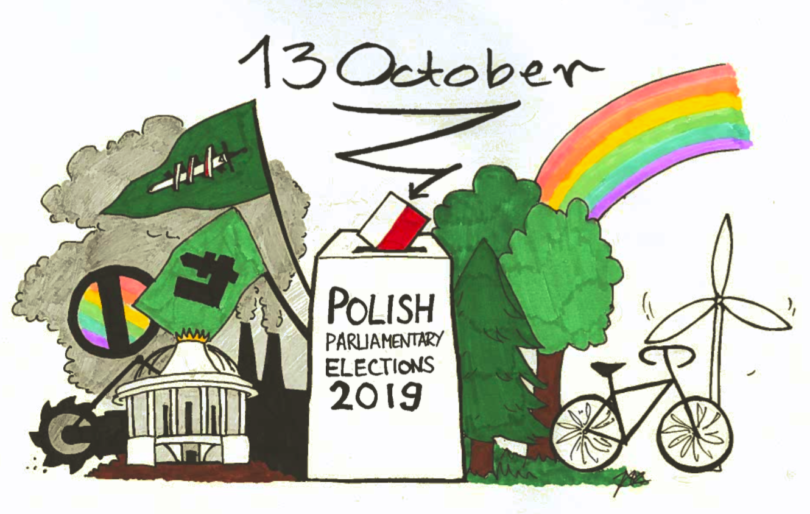 Edinburgh, Scotland, U.K. – With media almost unceasingly covering Brexit and the U.S. president’s newest whims, it comes easily to forget that the rest of the world exists, too.

Poland will have its next general election for the Parliament this Sunday, and perhaps enter another chapter in its contemporary history.

The last four years – when the conservative party Law and Justice (Prawo i Sprawiedliwosc) formed a majority of the government – were turbulent. They began with the Constitutional Court crisis and the formation of a cross-party opposition movement.

The women’s rights movement grew strong holding ‘Black Protests’ (Czarne Protesty) in reaction to the ruling party’s plan to ban abortion in all cases except to save a woman’s life.

The Law and Justice party’s deprecatory response to Pride marches and the violence directed towards the marchers by adversaries dominated the news in recent months.

Environment-wise, we saw the dispute over the Bialowieza National Park logging and a successful civil disobedience protest against it, which required intervention from the EU.

Duda’s party has also refrained from intervening in the violating of EU-protected nature areas in Poland, such as Mierzeja Wislana (Vistula Spit).

This month marks two years since the death of Piotr Szczesny, who publicly committed suicide in front of Warsaw’s landmark, the Palace of Culture, in protest against Law and Justice’s rules.

The Polish society is polarized and there is nothing certain about the outcome of the Sunday election.

Although the people who want clean energy, religious freedom and human rights for women and the LGBT+ population are unified against Law and Justice, the image of the ruling party is not as black-and-white as it might seem.

Such an example of ‘pro-family politics’ is only part of the party’s crusade to equate being a good Pole with being a good Catholic. The party not only has a generous supply of ‘electoral sausage’ (kiełbasa wyborcza, Polish equivalent of ‘pork barrel’), they seem to have convinced their followers that the true value of their faith lies in what political party gets their vote.

In some churches you can hear the Catholic priests preach that voting for Kaczynski’s party, Law and Justice, is the only morally acceptable choice a good Catholic can make.

The problem addressed by Martin Luther in his 95 theses 500 years ago seems to be repeating – only now, in times of universal suffrage, remissions of sins have become not only commercialized but also politicized.

News from home feels like fiction a lot of the time.

As a young woman studying at an esteemed university in the West, I have been educated on the social constructions of gender and the causes and impacts of climate change. My student union has liberation officers for LGBT+, women and people of color. Euroscepticism in my social circle is treated like a crime.

The election is no longer about which party offers a better benefits program. It is a contest of ideologies.

The Civic Coalition and Lewica, supporting human rights and clean energy – politics generally considered progressive – stand on one side. On the other – Law and Justice, a coal-based economy and discriminatory laws justified by religious and moralistic motivations.

The outcome of this election should matter not only to the Polish people but to those beyond the country’s boundaries.

The expansion of right-wing populist governments is a real issue that has been noticed worldwide and whether Poland will remain in this zone matters.

What is personal is political and vice versa. People’s lives are under threat.

I will vote, but I will not stay up all night anxiously awaiting results. I am safe and feel included, but this would not be the case for many of my friends if they ever decided to visit Poland.

My hope is that no matter what the election’s results are, my country is no longer run by discrimination and hatred. I want it to become a place where everybody feels safe and at home. This is my vision of Poland.

Joanna Koter is a Senior Reporter with Youth Journalism International from Torun, Poland.