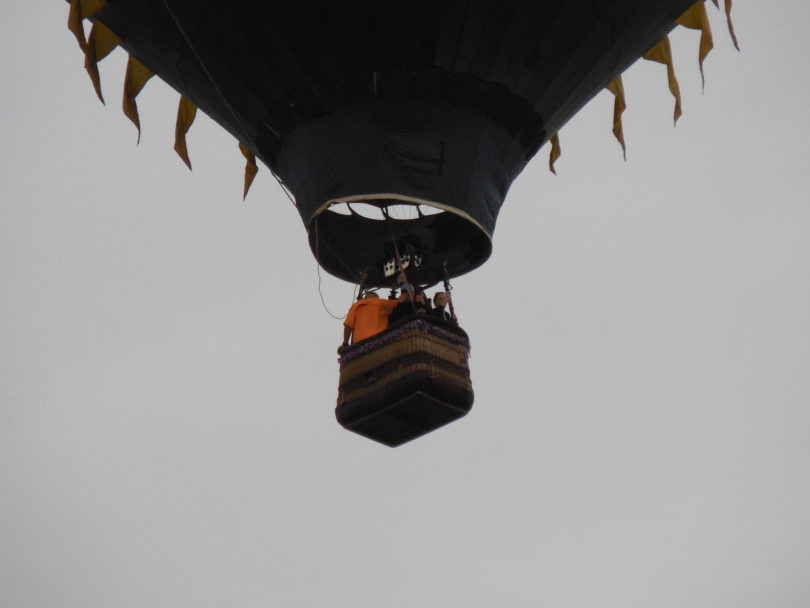 BRISTOL, Connecticut, U.S.A. — Many among us are familiar with airplane flight. But few have had the opportunity to ride in a hot air balloon, an entirely different experience.

Just for the time being, let’s suspend our cynical journalistic pretensions to discuss this.

Ballooning is not a feasible form of transportation. It’s purely for pleasure.

And it works well. There’s something to be said for floating freely a thousand feet above city and countryside, as a handful of local dignitaries and press types found during the Balloons Over Bristol festival.

Emerging over the trees at Page Park, Bristol came into fuller and fuller view until all of its surroundings were spread out in a green springtime panorama.

Expecting to feel thinly separated from the open air by a scant basket, I was surprised by the stability of the ride.

“I can get vertigo on a tall ladder,” said Plainville balloonist Mike Kirkwood, “but over here it isn’t quite the same.”

I also expected that those altitudes would create quite a chill as we went through powerful air currents. It didn’t turn out this way; temperatures were much the same as on the ground.

Another misconception I had was that the basket would be technologically sparse. As it turned out, besides the essential radio to keep contact with the chase crew, there were dials and gauges for measuring speed, altitude, and the like.

“It’s not a science,” said Kirkwood, of Northeast Balloons.

Flying early in the morning, we were given a chance to see the area uncluttered by traffic or any other motion. Passing over sprawling Bristol and the affluent suburbia of the Farmington Valley, I could understand how professional balloon pilots can charge in the neighborhood of $200 for a flight.

There are only about six Connecticut balloonists who make a living by giving rides. Many more do this only as a side job.

In order to fly, a balloonist needs a state license that can be earned after 20 to 30 hours of lessons from a licensed instructor, any commercial balloon pilot.

Our flight was less than an hour long (maybe because we went for free), but we made an easy landing in a field of waist-high grass in Newington.

“Nice, tall grass always helps landings,” said Kirkwood after coming down, as he proceeded to inflate the balloon just enough so that the chase crew could see it from the road.

When the crew arrived, the camaraderie between fellow balloonists and chasers was apparent.

“This isn’t bad,” Bristol resident Robert Zirpolo said of the distance to the road. “We once had to carry a 500 pound basket a quarter of a mile to Route 72.”

As enjoyable as the ride was, I had to wonder if the balloonists had an even better time.

“It’s a good time. It’s a reunion for the balloonists,” he added.

There are other area festivals besides Balloons Over Bristol. Plainville, Goshen, and Windham host similar events.

For those of us in the newspaper business, it’s difficult to admit being impressed by much. But, as someone once said, “Don’t be intimidated to be in awe of anything.”