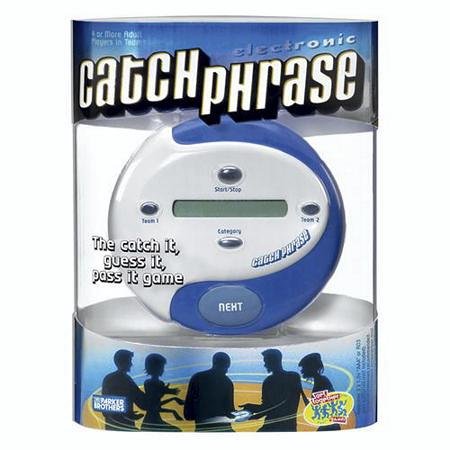 BRISTOL, Connecticut, U.S.A. — Catch Phrase is a game that delivers a jolt of fun and facts in one punch.
Created by Hasbro Inc., Catch Phrase is a reasonably clear concept to catch.
Players split into two teams and first select a degree of difficulty and a category of word topics to play. Choices include history, entertainment, geography, transportation, sports, and the all-encompassing “everything.”
The game bears resemblance to a round of “hot potato.”
The ticking timer on the game runs as teams take turns guessing words before the buzzer sounds. The object of Catch Phrase is to not be holding the game unit when the time runs out.
When play begins, the team member with the game unit must begin describing the word that appears on the screen, while not using any part of the word or any word that rhymes it. The other members of the team try to guess the word or phrase before the buzzer sounds. As soon as they do, the player with the game unit hits the advance button and passes it on to a member of the other team.
If the beeping suddenly stops and the buzzer goes off, the team not in procession of the unit gains a point. This continues until a team reaches seven points to claim victory.
The game’s primary weakness is in how points are attained. Under the rules, a team could successfully be guessing words quickly, but lose because a member happened to be holding the unit at the wrong time.
The point system could instead award points based on which team gives the correct answer, rather than who’s not holding the game unit.
Alternatively, each player could work with their fellow teammates to see how many words they can guess before the timer goes off.
The unit is sometimes a royal pain, malfunctioning or randomly resetting on you, but generally once you get the hang of using it, the game is fun.
Catch Phrase is a game that boggles the brain and keeps a fast pace going with a generous dose of creative flair.