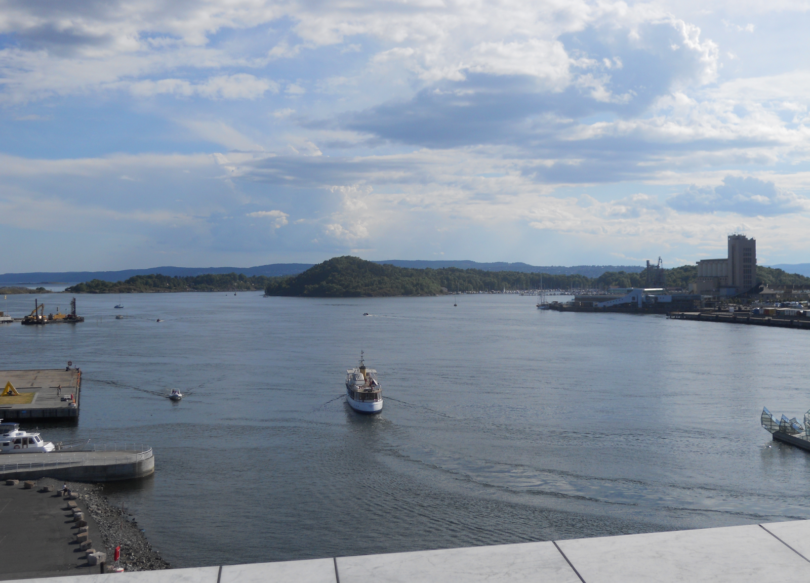 The view of the fjord across from the Oslo opera house. (Myah Guild/YJI)

OSLO, Norway – The first stop on my month-long trip around Europe was Oslo, capital city of Norway, the country famed for its mythology and rich history. On the way in, there was beautiful green scenery and cottages on rolling hills, just as I expected. 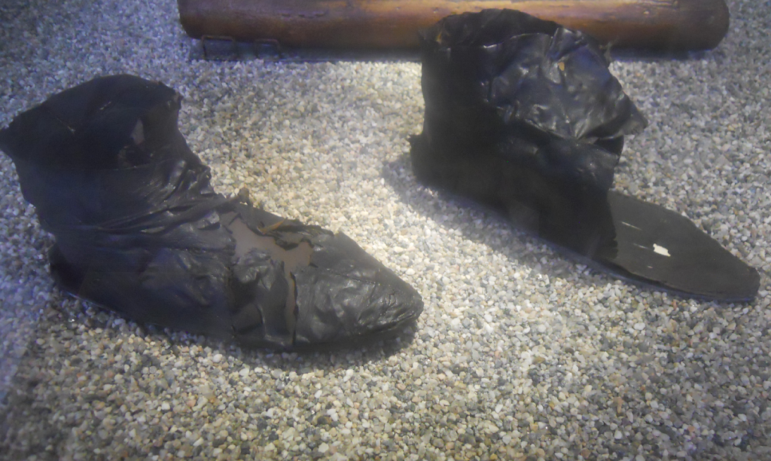 Viking shoes on display at the Viking Museum. (Myah Guild/YJI)

The city, however, was quite different. Very clean, tidy and modern, but without the hallmark Norwegian feel I was hoping for. In other words, you could really have been anywhere.

From the opera house, an abstract building, you can get great views of the city and the fjord. From the town center, you can walk up to the royal palace and sit in its peaceful gardens, away from the business of the main streets.

With regards to food, brace yourself! It is very expensive in Oslo. A pizza, in one restaurant, was £18 (about €23 and $31) so be careful. Some of the places sold snacks for a reasonable price. 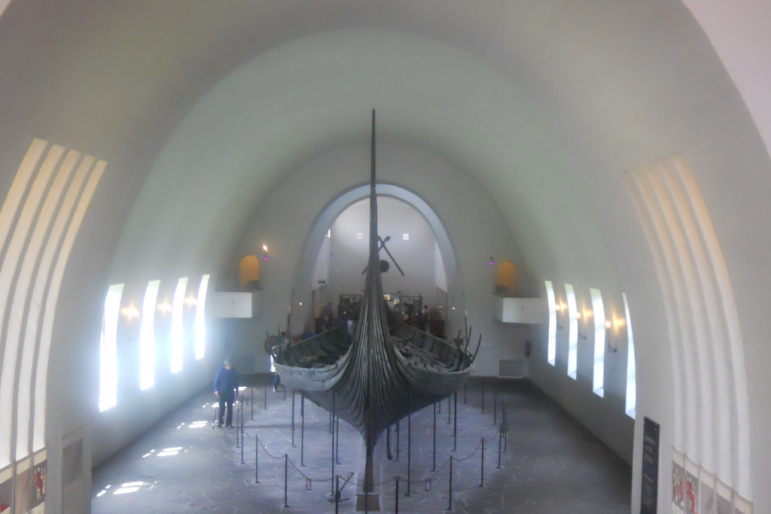 Inside the Viking museum is a boat like those used as burial caskets. (Myah Guild/YJI)

A Viking ax in the Viking Museum. (Myah Guild/YJI)

My friend and I, as young travelers, chose the safe option and bought food from the supermarket. This is a very good tip because you can save yourself a meal and a drink on the train.

On a lighter note, we spent the second – and last – day of our visit taking a boat over the fjord to see the Viking ship museum.
They have a number of free museums in Oslo. This one was about £5 for a student entry. 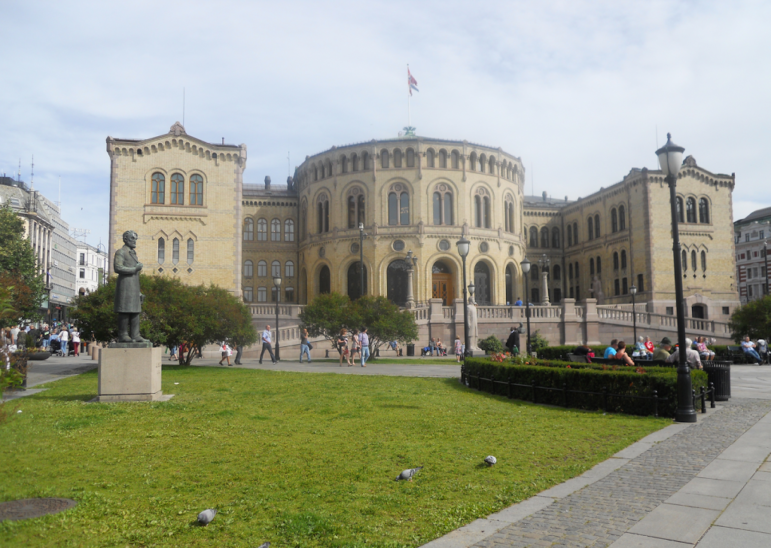 In the museum they displayed the ships and information about the farmer who came across them buried on a farm in the early 1900s. They were used as burial caskets.

Artifacts, such as shoes and combs, were in cabinets beside them. It was amazing to see how well-preserved the items were. 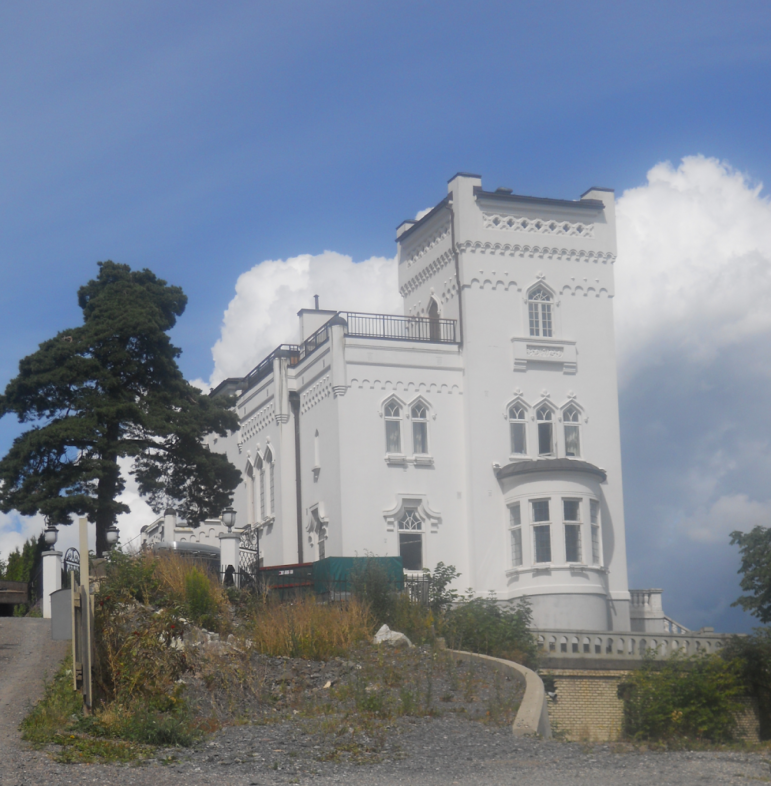 A house in Bygdøy (Myah Guild/YJI)

After that, we walked around the suburb we were in, Bygdøy, which was obviously one of the wealthier parts. The houses were like ranches: all different with some designed traditionally, with different features like shutters and picket fences, while others had more of a modern look.

Then we went back over (the boats run regularly) and had a look around the town hall, the fountains and the main central area.
We stayed in a hostel just 10 minutes from the main station, or 2 minutes by tram. No-one checked tickets, so the rides on the trams were free for most people.
For anyone worried about accommodation, hostels are much better than they sound. Most are meant for travelers, with hot showers, clean sheets, towels, and
laundry facilities.
Our next stop was Stockholm, so we left early the next morning. Oslo was a firm 3 out of 5, with beautiful scenery and attractions, but the city itself was lacking in many emblems of the history for which the country is so famous.

“Modern, yet still completely unique”
4 stars
STOCKHOLM, Sweden – This was the first day we used our inter-railing
passes. The train was very comfortable and easy to find in Oslo Central
Station. We reserved seats, which cost about £5, or about $8 each which was
well worth it because the train filled up fast.

The conductors simply check your passes and
reservations and ask you to fill the details in as you go. Most are very
helpful if you want details of connecting trains as well.
Another bonus is that journeys like Oslo to
Stockholm, which took five hours, gives inter-railers the chance to sleep and
relax on the train allowing more time to explore when you arrive at your
destination.
This is exactly what we did. We arrived at about 1
p.m., found our hostel over the river in the older and “hippier” area of Södermalm, and headed straight out to explore.
We came across a shopping street, Söderledstunneln, near the connection to the Gamla Stan (Old Town)
with pubs, restaurants, shops, and a brilliant view of the Ericsson Dome, which
is the largest spherical building in the world.
Then we grabbed dinner from a supermarket: a salad
and a very cheap beer (their restrictions aren’t as harsh, as it ended up being
about £1/€1.26/$1.68).  From
there we followed a tip picked up from the last hostel and found Skinnarviksparken,
a nearby park.
We then ended up back down the shopping streets,
passing the fountain ‘Tor and Midgardssnake’ showing the Norse god Thor slaying
The Midgard Snake. A show and a lawn bowling tournament were taking place next
to the fountain, which was entertaining.
On the second day we took more advice from the
locals and went swimming at a nearby spot. The park near the water was filled
with people (swimming is obviously a popular pastime here), and the barrier
meant the place was safe for everyone.
After that, we explored Gamla Stan, seeing their
royal palace, complete with wall fountains, and having a look through their
narrow streets and various souvenir shops. It’s still quite expensive, but your
money seems to go further here.
We had dinner in one of the restaurants along
narrow streets, and then we discovered all the floating hotels along the
harbour. They have a brilliant view across the lake of the old town which is
architecturally stunning.

The whole place is very modern, yet still very
traditional and, ultimately, Swedish. I will definitely return. 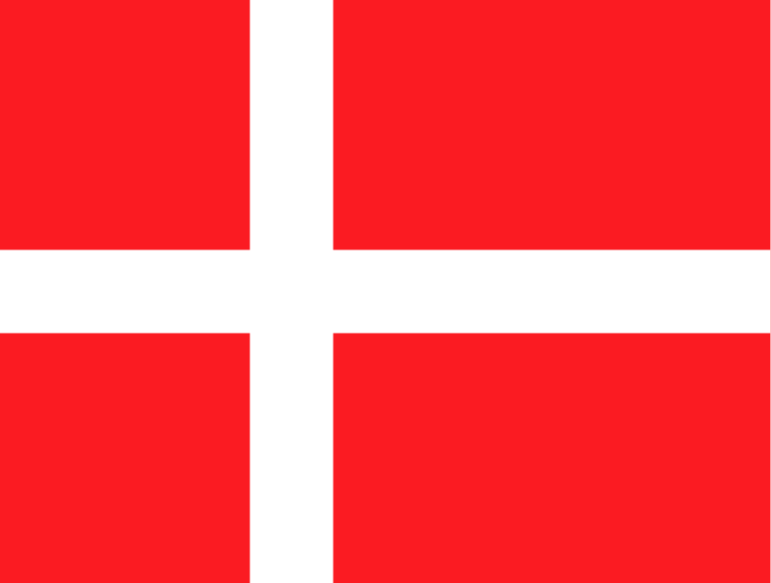 Our surprise was a lovely one – a ferry.
They managed to fit the whole train onto the boat;
we all went up to the top deck and enjoyed a half hour ride across the water in
the sun.
We were lucky to arrive in the middle of the annual
jazz festival, so we found a venue close by and ate some street food – a mixture
of meat, vegetables and béarnaise sauce (eggs, vinegar and herbs.) Very tasty.
The next day we had a look around, and went past
the theme park Tivoli and the main
square where street performances were taking place.
From there we went to the history museum but then
found it was closed on a Monday. So we went to Plan B and wandered around,
looking at Christiansborg Palace which houses the Danish Parliament, the Prime
Minister’s office, and the Supreme Court.
We had a look at the buildings around it as well
before remembering our mission to seek out a Danish pastry.
So, after much walking, we came across a park in
the middle of the city, with a really nice café in the center. After finding a
nearby bakery, we sat in the park with our pastries. One of the best things
about these cities was the fact there was always a park to sit and relax.
From there, we saw crowds going in one direction.
Assuming they were all going somewhere interesting, we followed them. We ended
up on Köbmagergade, a main street with shops and side streets and The Round
Tower, an astronomical lookout built by Christian IV in 1642.
From there we headed back,
via the square, passing the stunning Dragon Fountain on the way back.
Despite the rainy weather,
we were able to get a lot of things done. Copenhagen was, again, expensive and,
like Oslo, did not quite have the unique edge as the places we visited in
Stockholm. Weather will always change your view of a place and impact what you
can do there.
It’s a firm three for Copenhagen because,
while I won’t be hurrying back, it was still a beautiful and very historic
city.

Myah Guild is a Senior Reporter for Youth Journalism International. 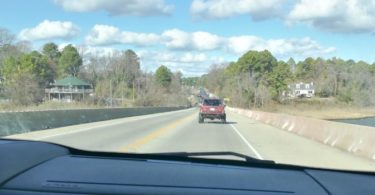 Suffolk, VIRGINIA, U.S.A. – Distance. That’s one of the first, fleeting words that come to mind... 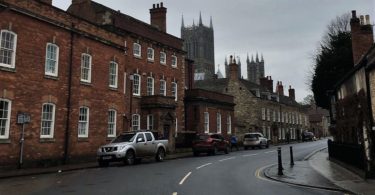 After moving from Lincoln to attend a university two years ago, I realized what it really meant to...