Clarksburg, Maryland, U.S.A. – Despite the pleas of officials imploring him to stay away from a city still reeling from a horrifying police shooting of an unarmed black man, President Donald Trump marched into Kenosha, Wisconsin with his problematic ideology.

The city this time was on the receiving end of another salvo of painfully ignorant and disrespectful actions from the nation’s president.

Unfortunately, I wasn’t shocked when I heard the president’s Tuesday visit didn’t include visiting the family of Jacob Blake, the father of three who police shot seven times in the back and left paralyzed on August 23.

Trump’s reasoning was the family’s supposed intentions to involve lawyers. Once again, this was a lame explanation, failing to answer my question: why was the leader of our nation refusing to address the rampant racism plaguing the country?

Denying the issue seems to be in Trump’s repertoire of excuses. The president barely mentioned Blake’s name, despite the protests in Kenosha being incited by his shooting.

Instead, Trump stuck to his previous messages, restating throughout his visit that he didn’t believe systemic racism and police brutality were issues.

Even this, however, wasn’t the peak of my exasperation. The president also declined to condemn teenage shooter Kyle Rittenhouse, even after he faced multiple charges, including two counts of first-degree murder.

Rittenhouse stands accused of killing two protesters and injuring another during the demonstrations in Kenosha.

At a White House press conference on Monday – before he visited Kenosha – Trump tried to defend the murderer by turning the blame to protesters and play Rittenhouse’s actions as self-defense.

“He was trying to get away from them, I guess, it looks like,” Trump said. “I guess he was in very big trouble. He probably would have been killed.”

The president turned a blind eye to the act of racism and violence, but his motivations to visit Wisconsin made the whole thing worse.

If he didn’t even bother to speak about a black man hospitalized as a direct result of police brutality, then why was he even there? The answer was simple to me. The president didn’t care about the protests or what fueled them. He just wanted to convince people in the swing state to link the Democratic party and its presidential nominee, Joe Biden, to violence.

Trump spent his visit ‘surveying’ parts of the city damaged by the protests, including an emergency operations center and a high school, then later holding a public safety roundtable.

This enraged me even more. Public safety refers to the safety of all the people, including black people. Trump’s actions just disregarded Blake’s safety and the safety of black men like him, who are consistently profiled and targeted by the police.

I don’t know when the president will open his eyes and address the discrimination that surges through the veins of American society. I don’t know if he ever will.

We are in the midst of a massive civil rights movement, yet the leader of our country wears a blindfold.

Sarah Gandluri is a Junior Reporter with Youth Journalism International. 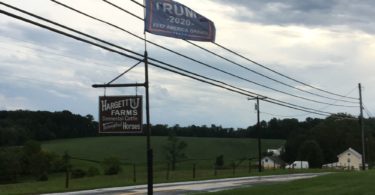 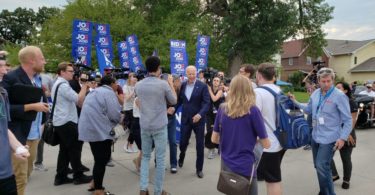 Clarksburg, Maryland, U.S.A. – In an extremely moving speech to millions of viewers about dignity...