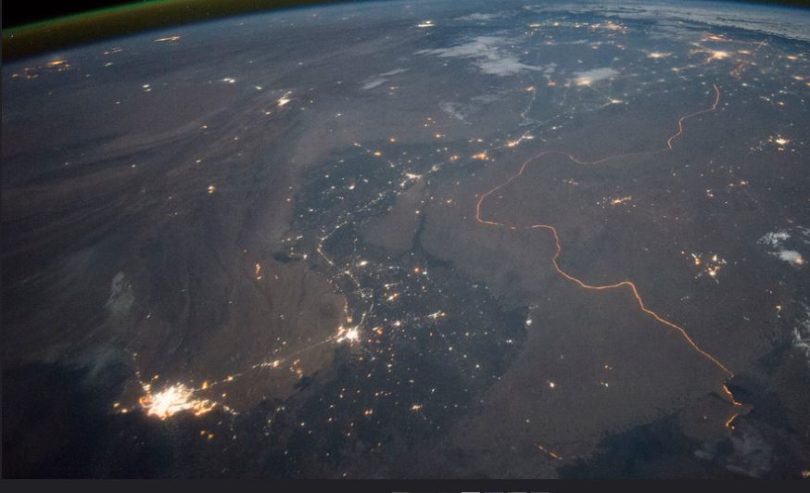 Karachi is the bright city on the lower left. The orange line is the border between Pakistan and India, list up by security lighting. (NASA)

KARACHI, Pakistan — I can just imagine it: people are walking towards their shops and offices, drivers are furiously pressing their horns in the congested street, while the strong summer sun bothers all. Everything’s normal.

But, suddenly, at the corner of the U.S. consulate compound, a vehicle explodes.

Now there’s a change in scenery: car pieces are thrown at the other side of the road, engulfed by flames.

Every glass is shattered: car windows, shop windows — even the windows at the Frere Hall, the city museum — are shattered (a place where my father once played with his friends when he was young).

The result? Twelve people killed, none of them American, and 40 injured in the June 14 blast.

Twenty-year-old Muhammad Irfan told The Independent that his father and brother were killed. And the sad thing is that Irfan knows that his family did no wrong.

The big question has been asked by many over the last year: why America? Why are Islamic militants killing Americans? Why do they hate them with such a passion? Why do the Islamic soldiers hold their copies of the Q’ran in the air as if the Holy Book justifies their actions? Why?

When a Reader’s Digest writer put these questions to a Pakistani child, who studies at a local madrassah, the child merely replied: “America is controlled by Jews.”

Ah, there’s the answer to the big question.

All over the world, most Muslims believe that America has been lenient to Israel over the years.

Did it condemn Israel, for example, when Palestinian leader Yasser Arafat, a symbol of hope for Muslims, was trapped within his headquarters?

Remember the fear in Arafat’s mother-in-law’s shaky voice, when she spoke with CNN over the phone?

An astonishing number of 1,382 Palestinians have been killed since September 2000 due to the Israeli occupation.

Perhaps there’s more this. There has to be.

For instance, when Pakistan immensely helped America during the long war with the Russians in Afghanistan, what did it get in return — a pat on the back?

Maybe America should’ve sided with Pakistan on the Kashmir dispute.

Sadly, the Karachi car bomb blast will have no positive effect for us.

This is the fourth attack in Pakistan which was aimed towards the Americans.

And the security in the city isn’t improving.

At the hospital, where he was in tears, he told a reporter that if he finds the culprits, “I will ask them what was the fault of my father and brother.”

And, like Pakistan, he still can’t prevent another attack from occurring.

Syed Huda is a Reporter in Pakistan for Youth Journalism International.