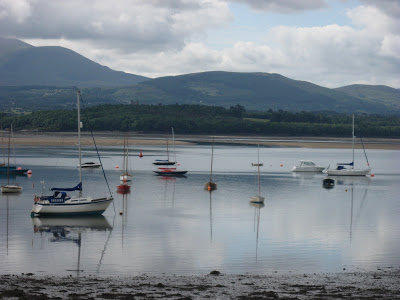 By Robert
Guthrie
Reporter
Youth Journalism International
WALES – We did a lot of traveling on our journey in North Wales.
First, we went
to Penrhyn Castle. To be honest, the castle was not a real castle – it was a
castle in disguise. It was a house
actually, and was made to look like a castle so that the Lord and Lady were
made to seem as if they were extremely wealthy.
Most of the
money which was used to make the castle came from the industries of sugar and
slate, or Welsh stone.
The castle was
finished 160 years ago, just as Queen Victoria had come to the throne. It had
about 300 rooms, most of which were available for public view. We saw bedrooms,
dining rooms, breakfast rooms, bathrooms and so many more.
One of the most
famous things about the castle is The Slate Bedroom. It doesn’t sound that
enticing, but lots of important people stayed at Penrhyn, and they slept in
here.
The bed inside
the bedroom is made of slate and that is why it has caught the name of “The
Slate Bedroom.”
It was
originally built for Queen Victoria’s visit, but in the end, she refused to
sleep in it.
We also visited
Betws-y-Coed (Bets-ee-ko-idd). We
stopped to buy some traditional Welsh items from a shop. We bought Welshcakes,
or flat scones, toffee waffles, which are circular waffles with toffee between
them, and Bara Brith, also called Welsh fruit bread.
These were very
delicious when we tucked into them when we got back to our holiday house.
The next day we
headed up a scenic road to Snowdonia, which is the biggest mountain in England
and Wales.
It was very wet,
but there huge rocks which had obviously fallen down from the sides. The earth
must have shaken when they fell.
It was a very
nice trip and eventually cleared up, giving us a chance to see some of the
green mountains.
Then we ventured
to the Isle of Anglesey. This is at the top corner of Wales, and if you drive
around the whole island (which we did) it is 80 miles.
First, we got up
early to travel to the Menai Bridge, which connects the mainland to Anglesey
over the Menai Straits.
It was built by
Thomas Telford, a great British inventor.
When we got to
Anglesey, out first port of call was a small town called Beaumaris.
It is home to
many different small shops, and most importantly, a castle. The castle is unfinished.
It was ordered built
by Edward I to make the Welsh people his subjects, and obey his rules. We
visited the bay there, too.
At lunchtime we
stopped at well-known Holyhead, where there were nice views of the blue sea,
and the boats which had been tied up in the marina.
A few miles away
from Holyhead is the Royal Air Force Valley. RAF Valley is where Prince William
practices his flying rescue skills. He and his new bride Kate live a few miles
away.
Finally, we
stopped at the world’s longest-named place, which is in Wales.
It is Llanfairpwllgwyngyllgogerychwyrndrobwyllllantysilyogogogoch.
A Welsh man
wanted to make people come to his attraction, so to do so he named it the
longest place in Wales. On a big blue sign it says how to pronounce the name in Welsh and on a black sign it says what it means.
It was a very good day exploring Wales.