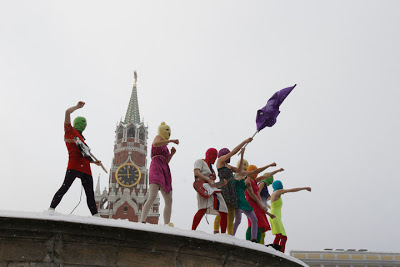 MILAN, Italy – Pussy Riot could be just the name of a Russian punk rock girl band, but it has become the flag of a battle against injustice.

Pussy Riot is a punk rock group open to everybody. Its members invite Russian people to wear balaclavas as a form of protest against President Vladimir Putin’s repression, but that is not all. Three of its members were jailed after performing a controversial, anti-Putin song inside Moscow’s Orthodox Cathedral of Christ the Savior.
The performance was held against the Russian Orthodox Church leader after his support to Putin and was a sort of prayer to the Virgin Mary to free Russia from Putin’s destructive power. What happened to be a questionable but harmless protest cost the three young women two years of jail for “hooliganism motivated by religious hatred,” as the court stated.

With their protest, Maria Alyokhina, 24, Yekaterina Samutsevich, 29, and Nadezhda Tolokonnikova, 22, “undermined social order” and were blasphemous enough to deserve spending two years in prison, according to Judge Marina Syrova.
Pussy Riot, which began immediately before Putin’s re-election, is nothing but a group of young women wearing fluorescent balaclavas who decided to stand up for women’s rights and the freedom of expression. But standing up for gay and transsexual rights, gender equality and freedom of speech is a dangerous thing in Russia as the three of them have learned.
I believe in common respect, which includes religious respect. But I also believe the three members of Pussy Riot weren’t addressing their provocative performance towards Orthodox believers.
What is happening in Russia is nothing but another cover-up by the Russian government against its opposition. It is not very different from what had happened the day after Putin’s re-election: scores of protesters jailed for trying to state their opinion.
But that is not all. Women were used to form the so-called “Putin’s Army,” a volunteer group composed of good-looking girls eager to show their breasts for the “cause.” Loads of scantily-dressed girls poured into the streets and started washing Russian cars to promote the value of Russian blood, giving their body to their country, and their sexuality to their president.
Russia is a country with a deep and intricate history, a huge land which is part of the European Union but with ties to the Middle East, strongly involved with both European and Asiatic matters.
Its power is silent but strong. For many European countries, Russia is the main (and only) source of gas, and Putin knows it well. With his puzzling grin, Putin holds his grip on international affairs and still plays a massive role in the Syrian matter. While standing with China in unshakably stating his support for Bashar al-Assad’s regime, he forces all nations to walk on eggshells.
The internal situation is not going any better, as proved by the Pussy Riot affair. Tolerance against the regime’s opponents is near zero, although the foreign press does not speak about it that much.
I believe in peaceful protest. But I also think that sometimes a strong and provocative protest is needed in order to gain the visibility it deserves.
The global reaction to the Pussy Riot affair proves I am not totally wrong. Global organizations, musicians, politicians and much more decided to stand up against the Russian court in support of the three young women.
This is immediately reassuring but still scares me a lot. This is our modern society: you have to be jailed in order to gain other people’s attention. People’s attention generates outrage. But what does outrage lead to?
We are a generation of outraged people who are still too lazy to stand up, take the remote control and switch channels. We are glad world leaders declare their indignation against injustice in the world, but then we forget it. Or, worse, we condemn a protest for not being politically-correct without asking ourselves why.
If we do not change, there will be more Putins re-elected in the world, more Syrias and an endless line of beautiful girls eager to undress to support an idea of power.
But we will still have our outrage to console ourselves with.
Eugenia Durante is a Senior Correspondent for Youth Journalism International.