Bristol, Connecticut, UNITED STATES — It’s always sounded like a fun game. After all, it has been around for over 20 years so it’s at least got some sort of following.

I just didn’t think it would be that damn hard.

A room full of smart and capable teenagers should be able to manage to play a game, follow its rules, and announce a winner. Right? This did not happen in Trivial Pursuit. 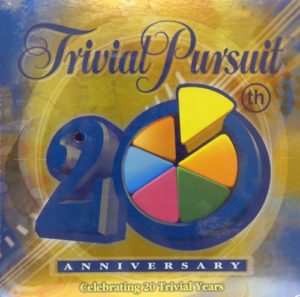 The game, which consists of rolling a die, answering a question, and gaining colorful trivia pieces, sounds user-friendly enough, but little do you know the hidden evil lurking on one side of those little question and answer cards.

While the game is simple, the questions tend to be full of completely useless statistics, such as: “Who are likeliest to die at work in the U.S.? Garbage collectors, roofers, or taxi drivers?” (Turns out the garbage collectors are mostly likely to bite the bullet.)

Some questions are even hard to ask. Try saying this one, for example: “What U.S. movie director earned Germany’s highest civilian honor, the Bundeverdienstkreuz mit Stern in 1998?” (The answer is Steven Spielberg.)

Come on … who can even PRONOUNCE that? Who knows, maybe I’m missing the whole point of the game.

I’m sure Trivial Pursuit is great if you have the knowledge – players have to correctly answer questions in six different categories – and I’m sure there are groups of people somewhere who delight in such questions.

As for myself, I wonder if they make a junior, junior edition. I’m pretty sure I could handle that one.

Trivial Pursuit, which is for adults, is for two to six players, and could accommodate more people if you create teams.