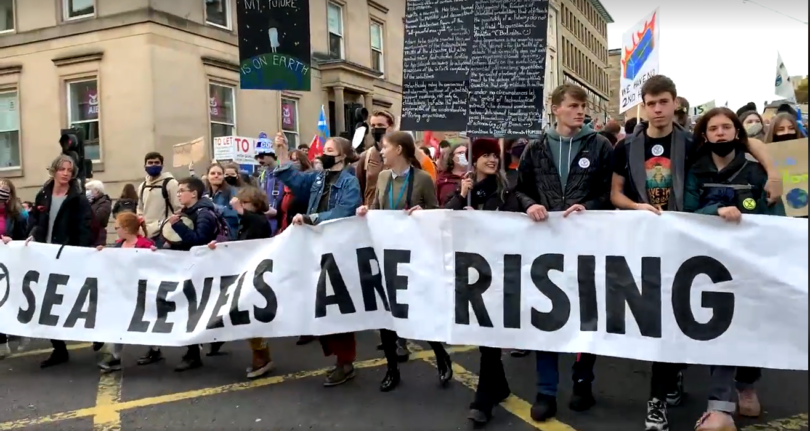 EDITOR’S NOTE: This story has been updated.

Glasgow, Scotland, UK – There was a tense mixture of emotions in Glasgow today as the Fridays for Future protest march began in Kelvingrove Park.

Optimism and excitement filled the air around the protesters and some of their children – it was the School Strike for Climate, after all. The forming crowds in Kelvingrove Park holding a vast variety of colorful signs and creations provided plenty visual evidence of how determined everyone was.

There were plenty of journalists with expensive cameras buzzing about and little chants or activities popped up constantly here, where the United Nations Climate Change Conference, known as COP26, is taking place.

For others, there was some cynicism and apprehension. Some protesters took a pessimistic view that COP26 was more of a public relations show than an actual negotiation. The departure of world leaders from Glasgow added to the concern and Swedish climate activist Greta Thunberg reinforced it all when she spoke later in the day.

Still, the march left the park around noon and started making its way east through Glasgow towards George Square at the heart of the city where the closing rally was held. Locals watched from their windows or sat hanging from their window ledges as the procession, aided by police cordons, slowly navigated its way along the planned route.

With police helicopters in the sky and horse-mounted units lining the streets and paramedics cutting about on bicycles, it was clear this was a big event with the potential for something to go wrong quickly.

But this didn’t deter the thousands of people who cheered and called for climate justice or those who held banners and billboards high. The climate – and pushing those apathetic to the issue to pay attention – was more important.

Police officers wearing light blue instead of the usual colors, designated as “Police-Liasion” officers,  were dotted around along the streets. While meant to be a helpful presence with a strong focus on communication and de-escalation, there was not much goodwill given to any authority figures at the event.

One protester followed the officers around with a sign, warning those nearby not to speak to them. Someone passed out a card claiming these sky blue variants sought to gain information from protesters that could be used to limit or control them.

There was a clear lack of connection and trust for police and governmental figures at the march and following rally in George Square, where speakers gave galvanizing messages to the weary audience.

They were unified on at least one point – they shared serious doubts.

While some politicians such as Ed Miliband, a member of Parliament with the Labor Party who also serves as shadow business and energy secretary, were optimistic about the potential results from the climate conference, the speakers on the rally stage were not.

The governments and leaders of the nations at COP26 had not yet done enough for the young people or for the Earth, they said.

And whether that will change over the next and final week of the conference is anyone’s guess.

Saturday is the Global Day of Action for Climate Justice, with protests and marches planned around the world.

In Glasgow, it is expected to be the busiest protest event yet.

Come to our first Global Gala at 12 p.m. Eastern on Saturday, May 21 on Zoom! It's a series of short, powerful performances contributed by YJI students from Australia, Bangladesh, Botswana, Ghana, England, Iran, Mexico, Poland, Nigeria, Scotland, Sweden, Turkey, the US and Wales. Performed entirely by students, this event is free, but we hope you will be moved to contribute towards the Global Conference in Istanbul next month. See comments for how to access this event. ... See MoreSee Less