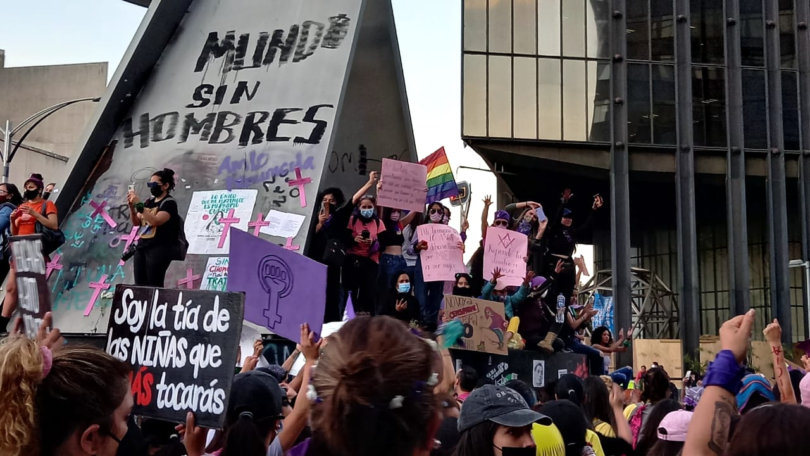 MEXICO CITY – For years, Areli Sánchez has spent International Women’s Day marching for equality and an end to violence against women.

This year she went back again.

“I think it’s indispensable for women to go out to the streets and be present in the march, because if not, nothing is going to change,” said Sánchez.

The women’s march – one of the biggest events each year in Mexico City – takes place annually on March 8, International Women’s Day.

Women from all backgrounds, carrying signs demanding their human rights, took to the streets, which were splashed in vibrant shades of purple to signify feminism.

“Today is not a day to celebrate women, today is a day to listen to women,” one of the signs read, while another said, “Do not give flowers, give me rights.”

While some women are afraid to attend the marches, Sánchez said she’s been going for five years.

“My girlfriends told me that because nothing has changed they are not coming,” said Sánchez, “but I believe we have to keep fighting.”

It is deplorable that women today still have to protest so their demands for their rights will be heard, but, feeling like nothing will change without action, marchers took to the streets in large numbers.

Local news reports said that this year almost 75,000 women got out on the streets and marched for basic human rights, including the right to be safe and to be free.

“I’m sick of being scared of going out, I’m sick of not having liberty,” said Ana Gabriela Vera Calzada, another woman who was part of the protest.

Using Google forms, feminist organizations assemble groups on social media to walk together at the march. Any women can sign up. The purpose is to have a count of the women who attend and for the participating women to feel safe.

There are also smaller groups, organized separately, where the contact with the leaders is much closer.

Each organization has a specific niche. For example, organizations like Amnistía Internacionalwhose demands were pointed at issues of insecurity and violence against women.

Jessica Hernández Salazar said her reason for coming to the march was to protest for safety and equal job opportunities.

“I’m a biologist and in the factory I work for there are very few employment opportunities for women,” Hernández Salazar.

Women’s paths in the workplace can be much narrower due to the lack of opportunities or other situations women have to fight every day.

At the march, it felt safe to step into the street between thousands of women who were chanting at the top of their lungs and demanding the rights they should have been given just for being born.

In every direction, there were women with the same goal.

Although marchers looked different from each other and probably many had very different ideas of feminism, they all sought equal rights for everyone.

Regina López is a Senior Reporter with Youth Journalism International.