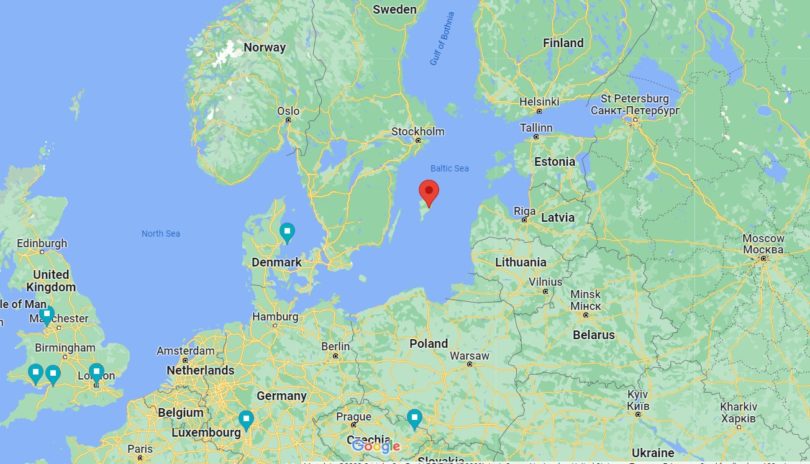 This Google map shows Sweden's island of Gotland in the Baltic Sea (marked with the red pin) surrounded by other European nations.

STOCKHOLM – As the Russian invasion into Ukraine and subsequent war began nearly three weeks ago, the conflict has risen to the center of many Europeans’ consciousness and forced us to reflect on how we react to global conflict.

I can only speak from the point of view of one person from Sweden. A small country with a typically non-confrontational attitude, Sweden is viewed as quintessentially ‘neutral.’

Sweden is a place that’s managed to keep its nose out of conflicts throughout much of history.

But as tensions escalate between Russia and Ukraine, the Swedish government and public have been quite vocal in expressing solidarity with Ukraine. As a result, Russia’s President Vladimir Putin threatened us. Russian fighter jets were reported inside Swedish air space on February 2, flying over the island of Gotland in the Baltic Sea while Swedish and Finnish officials were meeting there.

Putin is demanding that Sweden and Finland stay out of the conflict and out of the North Atlantic Treaty Organization, or NATO.

Recent polling in Sweden, though, seems to indicate an overwhelming shift, showing that Swedes want to join NATO. They express sympathy towards Ukraine and condemn Putin. Yet some in Sweden are growing weary of the country’s vulnerable position against the potential force of Russia.

Here, Ukraine is at the tip of people’s tongues and with each development comes new fears. What will happen to Ukrainians? When will Putin stop? Why all this death, destruction and murder?

And then we wonder: Who is next?

The fear of our own safety being compromised takes over. Young people discuss the latest news and older generations reminisce about the political instability in the past.

Searches for maps of nearby bunkers have skyrocketed. Local papers report grocery stores being emptied by people hoarding supplies, as if Russia has already set its next target on us.

Who can blame them? Normally it would be considered an irrational fear, yet Putin started an irrational war. This is a war based on the fictional threat of NATO’s hidden agenda. Russian forces tiptoe along the Polish border of Ukraine, further heightening people’s paranoia.

But the situation in Ukraine has awakened a realization in the minds of youth here.

We face a bitter truth: people stay almost exclusively informed on and involved in global issues that directly affect them. This is no new discovery, nor is it inherently an immoral one. On the contrary, this is completely natural and ingrained in our biology.

Any threat which lies directly ahead is what sustains our attention and stirs us from emotional apathy.

But accepting a purely self-centered view of the world is also a dangerous path to tread. Turning a blind eye to human suffering outside of ourselves does not erase injustice, but gives it room to grow.

Setting a precedent of complacency and silence due to fear means that one day, if we ourselves are faced with the threat of war and political oppression, it will be deemed normal.

Ukraine hits close to home. But it also gives us a chance to undo prior wrongs of ignoring what’s happening around us. The war in Ukraine offers a new chance to awaken public empathy and support.

Nargis Babar is a Reporter with Youth Journalism International.

Read more from YJI about the war in Ukraine:

Russian youth: Our national soul is on its deathbed