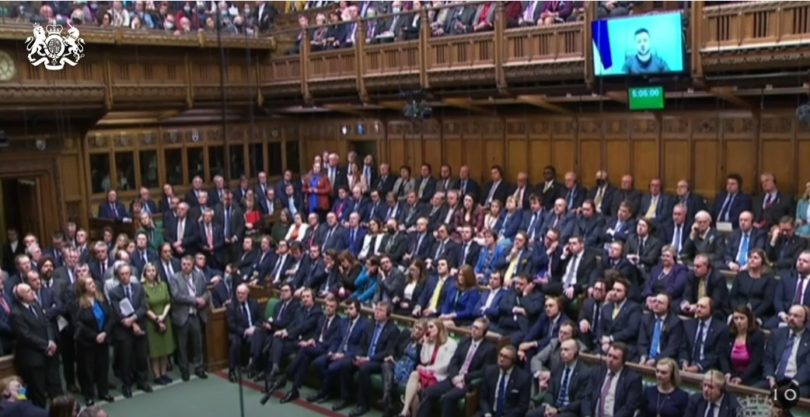 A weary yet defiant Volodymyr Zelensky connected to the UK House of Commons via video call Tuesday as the first foreign leader invited to speak directly to the UK Parliament.

The Ukrainian president addressed the Members of Parliament who packed the historic chamber.

Zelensky broke down critical events of the war that he said Ukraine “didn’t start and didn’t want.”

He explained how the war began at 4 a.m., when Ukrainians woke up to cruise missile attacks.

“Everybody woke up, people, children, the entire Ukraine. And since that, we have not been sleeping, we have all been fighting for our country,” Zelensky said.

He then described the air strikes and artillery attacks that followed, targeting hospitals, churches, and nuclear power stations.

Zelensky assured the Parliament that while Ukraine started capturing Russian soldiers from the fourth day of the war, they had not tortured them and had remained humane.  He also stated that “…on day 12, losses of Russian army exceeded 10,000 people killed.”

Many of the lawmakers became teary-eyed as the Ukrainian leader spoke of the constant shelling bombarding Ukrainian cities such as Mariupol, killing innocent civilians, including children.

“Over 50 children have been killed. These are the children that could have lived, but these people have taken them away from us. United Kingdom, Ukraine did not want this war.”

Towards the end, Zelensky referenced Shakespeare, questioning that if Ukraine was facing the question of ‘to be or not to be’ during the war, it would be.

As he referenced the “heroic Ukrainians” stopping Russian army vehicles with their own hands, he echoed a famous speech former UK Prime Minister Winston Churchill delivered during WWII when fighting Nazi Germany.

“I would like to remind you the words, that the United Kingdom have already heard, which are important again,” Zelensky said. “We will fight until the end at sea, in the air. We will continue fighting for our land, whatever the cost. We will fight in the forests, in the fields, on the shores, in the streets.”

He pleaded for Johnson and the West to increase sanctions against Russia and recognize the country as a “terrorist state.”

Zelensky said he was grateful to Prime Minister Boris Johnson for the UK’s continued support, but asked for more help, repeating his request for a no-fly zone.

“Please make sure that our Ukrainian skies are safe.”

Owen Ferguson is an Associate Editor with Youth Journalism International.